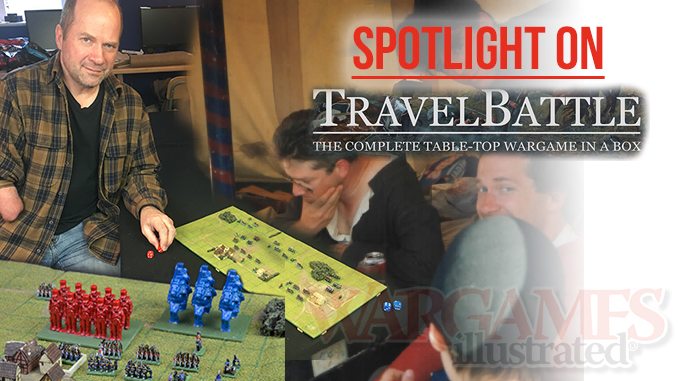 We caught up with the Perry Twins to discover the ‘secret’ behind their latest venture, a change of scale and focus for two masters of the sculpting arts.

Almost everyone who is involved in any way with ‘The Hobby’ must have heard of the Perry’s. Alan and Michael have been sculpting miniatures since they were but wee lads, having worked for Foundry, Games Workshop and as the founders of Perry Miniatures. Apart from brief sojourns into 20mm and 54mm miniatures, their figure size of choice has always been 28mm (the grown up version of 25mm) for more years than we care to remember. Of course, their life as wargamers has been diverse, as has their life away from the industry (yes, they have real lives as well!). So, never ones to remain stuck in a rut, the Perry’s have sallied forth into a whole new scale, reviving what was and coming up with something completely different.

TraveBattle began life as a way to pass the time during journeys to and from re-enactment locations or after a hard day’s ‘battling’ at 1:1 scale. Michael constructed a board, a selection of 6mm Heroics and Ros Napoleonics were obtained and painted and a set of rules were created. After a number of years, other matters took precedence and the Napoleonic version of the game, plus two offshoots, were placed in storage. Egged on by his wife and in conjunction with Alan, Michael revived the idea and the dusty originals were rescued, the rules tested, amended and written down properly and plans were made to re-create the whole thing using plastics. First, the scale of the game. Sticking with the basic ‘two board’ concept, it was decided that it would be good to keep to roughly the same sizes as before. Two 10” square boards don’t leave too much room for figures, so it was decided that the miniatures had to match. The Perry’s decided that 6mm was too small but 10mm would be too big. So, they opted to create a new scale, 8mm. The boards themselves are more 3D than the original, with a 1” ‘grid’ system etched into it, meaning that there is no measuring involved, so no awkward moments with tape measures on the train or problems with forgetting to pack a ruler. Each board has wooded areas moulded upon it, complete with removable sections to place miniatures inside, and the set comes with six separate plastic buildings moulded in grey plastic. The boards are provided in a green plastic but flock may be added to give them that ‘wargames table’ look. The layout of the boards means that they may be set up in a number of configurations, providing different battlefields to fight across each time.

Of course, its all about the miniatures and rules for many gamers. This iteration of the game consists of two forces, moulded in red and blue plastic, of fairly generic Napoleonics. There are 160 infantry, 24 cavalry, 4 guns with 12 crew in total and 6 Brigadiers, obviously divided equally between the two sides. These miniatures are so generic that they could actually be used for battles up until the 1840’s and the set comes with a painting guide with generics in mind, but if you want to field a particular nation, have at it and paint away. The rules are based upon a D6 system, with each unit requiring the presence of a Brigadier to undertake the majority of actions. Artillery has a 6” range and the miniatures move by squares, with infantry and cavalry having to come into contact to open fire or fight in melee. Basically, you roll a D6 and see what happens, the classic opposed die roll. Games should last about an hour on average, so the longer the journey, the more games you can play!

If the game is successful, there are plans to expand the range of items on offer, such as providing the boards and figures separately for those with a larger playing area in mind. Also, whilst this first 8mm ‘game in a box’ is loosely themed around Napoleonics, versions do exist of World War Two and Colonial Sudan era games, complete with miniatures and suitably themed boards. As with all things, if you want more, the easiest way to encourage the manufacturer to expand is to buy more. Everything is designed to fit neatly back into the box when you’re done. The game should hopefully be out at Salute, so those who are attending will get the first chance to buy it. The future is now, the future is TravelBattle!