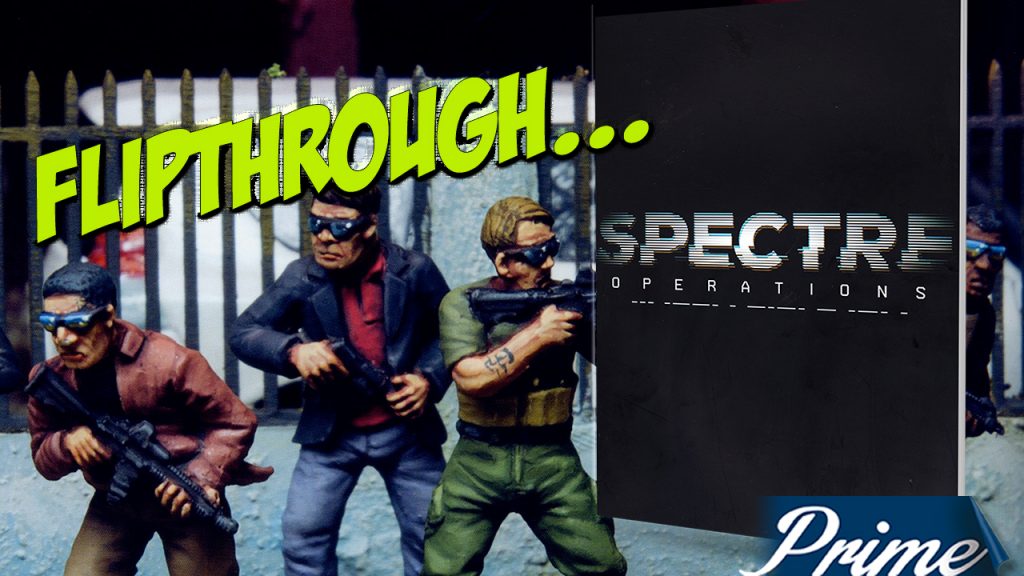 A view to gaming on the cutting edge of ultramodern and near future warfare, the new Spectre Operations tabletop rules are designed for use with 4 -40 figures in a skirmish style wargame.

The game uses character profiles for individual or groups, with essential profile stats consisting of Command (CD), Agility (AG), Shooting (SG or ST), Defence (DC) and Melee (ME). Each figure also has a Points Value (PV) to aid in force and scenario design and balance.

The different phases of the turn are clearly laid out, starting with the Initiative phase, leading to Command and Movement and Tactical. Each phase is well defined, relatively short and simple to understand.

The Combat Phase is longer but covers almost every eventuality, dealing with Direct Fire, Lethality and Casualties, Close Combat, Vehicles and Weapons Rules.

The system uses six-sided dice, with players adding modifiers to create a target number they must roll equal to or less than to succeed. The majority of potential actions have been covered,but the system is flexible enough for gamers to adapt almost anything to one or more of the core stats.

Generic Equipment lists, rules and definitions for Off-Table Assets and Force Selection and Points Values help to round out the game incredibly well.

The Tactics Guide places real world combat actions within the framework of the gaming table, and aims to get players using their miniatures in a ‘realistic’ way.

The game is very much scenario-led, so the Game Set-Up and Scenario section offers plenty of ideas and five scenarios ready for tabletop usage.

The game contains a wealth of excellent photographs of many of the miniatures designed for use with the rules. These are all Spectre Miniatures’ own, in our opinion some of the most accurate depictions of a range of different types of combatant that can be found on the modern battlefields of the world. Whether you want to field poorly trained African militia or Tier One Operators, there are figures in the range to represent them.

Not only does this rulebook look good, with some fantastic layout and photographs, but the rules also appear remarkably comprehensive whilst retaining a slickness and ease of play. As an attempt to simulate the fast moving environment of the ultramodern battlefield, it looks like it should work well. The rules could be adapted for almost any conflict or action during or after World War two, with the rules coping ably with the nature of conflict in the immediate future. All in all, a nicely thought out product which shows that Kickstarter can work for companies who genuinely aim to deliver.