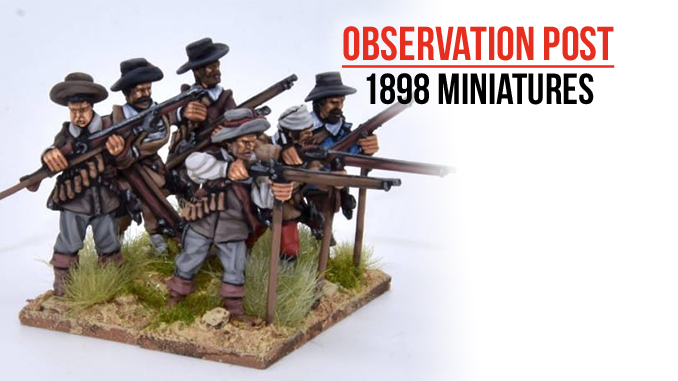 This is a new range of 28mm metal figures from 1898 Miniatures, aimed at covering the Spanish troops of the early to middle 17th century, when Spain was busy fighting the Dutch Republic in the 80 Years War, and also supporting the Imperial armies in the Thirty Years War.

The initial releases cover the backbone of the infantry forces, namely the pike and shot armed troops, with command packs, some handy wounded figures, and also some terrain add-ons of ‘battle field clutter’ ideal for dressing bases and making vignettes.

The infantry come in packs of 6 with each pack being made up of unique sculpts, which is a great touch. The pike are split into armoured and unarmoured packs, with a choice of either stationery or advancing poses, and include metal pikes, with shaped leaf-head spear points (watch out as they are super sharp!). The Shot are split in to Musketeers, who carrying heavy matchlock weapons with rests, and Arquebusiers sculpted carrying lighter and shorter matchlocks without rests. There are a mixture of poses in each pack with miniatures depicted both loading and firing. There are also two different command packs with officers, NCOs and musicians being represented in each pack. Fans of “Alatriste” will see many parallels to the Spanish troops portrayed in that movie. Most figures come with separate scabbarded swords and some also with ‘main gauche’ (or parrying daggers). These are easy to fit to the figures with a small blob of glue, and again add to the Alatriste-feel of the miniatures.

The sculpts are very characterful with lots of nice touches to suggest soldiers used to the rigours of campaign life. There is a nice selection of head gear and a range of different small items of dress to give the figures an individual look.  The style of dress would work well for many troops through the first half of the 17th century and, while aimed at representing Spanish troops by the designers, they would work for most Western European forces around this time.

Size wise these figures fit toward the taller of the 28mm size ranges. They match well with Bicorne and Renegade ranges, for example, and are very close to Warlord.  They are a bit taller than TAG, Perry and Eureka ranges.  This being said, I would happily add these figures in to a mixed manufacturer unit, having them just represent the taller men in the unit.  There is a size comparison picture on the 1898 Miniatures’ website, which is clear and easy to use and dual language.

From a purely personal point of view, my favourites of the range are the standing pikemen. The really look like a bunch of bored soldiers, waiting for the action to start, and have a lovely nonchalant set of poses.  Overall this is a great addition to the 28mm Pike and Shot period. You can tell that the designers have a real passion for the period, and I hope that this is the start of a bigger range to include mounted, and perhaps some typical Dutch militia types. Personally I’d love them to do a specific Alatriste set of the Captain and his rag-tag band. I suspect IP issues may prevent this but I hope 1898 can find a way to pay homage to these classic novels and the Viggo Mortensen movie.