Southern Thunder, the Royal Navy and the Scandinavian trade in World War One

Home » Uncategorized » Southern Thunder, the Royal Navy and the Scandinavian trade in World War One
Previous Next
Mark Boam 28 May, 2019 0 comment(s) Categories: Uncategorized 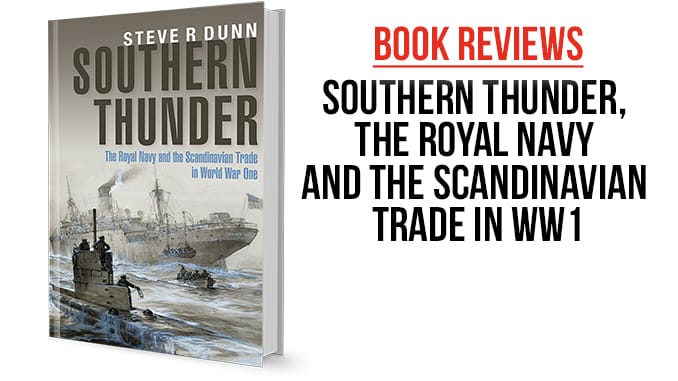 Southern Thunder, the Royal Navy and the Scandinavian trade in World War One Steven R Dunn
Reviewed by Jim Graham

Southern Thunder, the Royal Navy and the Scandinavian trade in World War One by Steven R Dunn, is published by Seaforth Publishing.  It has 304 pages including appendices and index, 16 pages of photos and a map of the North Sea. It covers the trade to and from Norway, Denmark and Sweden during the Great War when the three countries were neutral.  Between them the three countries provided much of Europe’s iron ore and other minerals, food and fish as well as timber.  Both the allies and their Central Powers wanted to ensure their supplies while denying them to the enemy.  It shows how much the world has changed in a hundred years that, for example, the then essential trade in timber pit props from Sweden to Britain is now simply a historic footnote.

The book doesn’t just cover the military aspects, as well as political considerations there is a discussion of what trade is legitimate, what items were contraband and how some were reclassified to suit political purposes.

The Royal Navy were forced into providing escorts for the shipping when what they really wanted was a showdown with the Imperial German Navy.  The philosophical change to protecting shipping and ultimately to convoys is covered in the book as is the fact that it was not only the Navy who were reluctant to form convoys but merchant ships were oddly reluctant to join them or follow orders, and would slope off to their destinations rather if they thought it was quicker.  Kipling’s poem, quoted by Dunn, sums up the dilemmas nicely.

Throughout you get the idea that the British forces involved were make do and mend, that the better ships, and officers, were employed elsewhere.  This leads to confrontations between armed trawlers and German destroyers, or RN destroyers and German cruisers which go the way you would expect. Dunn also covers what happened after the actions covering the courts of enquiry and court martials which resulted from the loss of ships.  As Dunn points out if you followed Nelson’s instruction to closely engage the enemy you would rarely be faulted, even if their Lordships would have preferred discretion.

The nuts and bolts of the war in the North Sea are covered in detail and it was news to me that Methil in Fife, about twenty miles from where I write this, was a major destination and departure point for convoys.

Most books simply refer to blockades of Germany and food shortages but here Dunn gives us chapter and verse of the trade and how the blockade worked or was circumvented.  It came as news to me that, for example, French merchants continued to export wine and brandy to Germany well after war broke out.  I must confess that as a “Westerner” I had never really given any to thought to the neutrality of the Scandinavian countries and the effects of that stance.  This book has certainly redressed that.

Southern Thunder goes over many of the actions of the campaign, the sinkings by U-Boats which were sunk in turn, armed trawlers battling storms and mines, and occasionally overmatched destroyers taking on German surface raiders.  It sets the scene for Hitler’s War where you can see both sides try to avoid the problems of the previous war.  This book is essential reading for anyone with an interest in the naval aspects of the Great War and provides a detailed guide to fighting the smaller actions in the North Sea.  There are only so many times you can refighting Dogger Bank or parts of Jutland but Southern Thunder gives you the basis for a myriad of actions, albeit of a much smaller scale.  Discussions are already under way among my gaming friends for a campaign covering the events in the book, which says much for its quality.