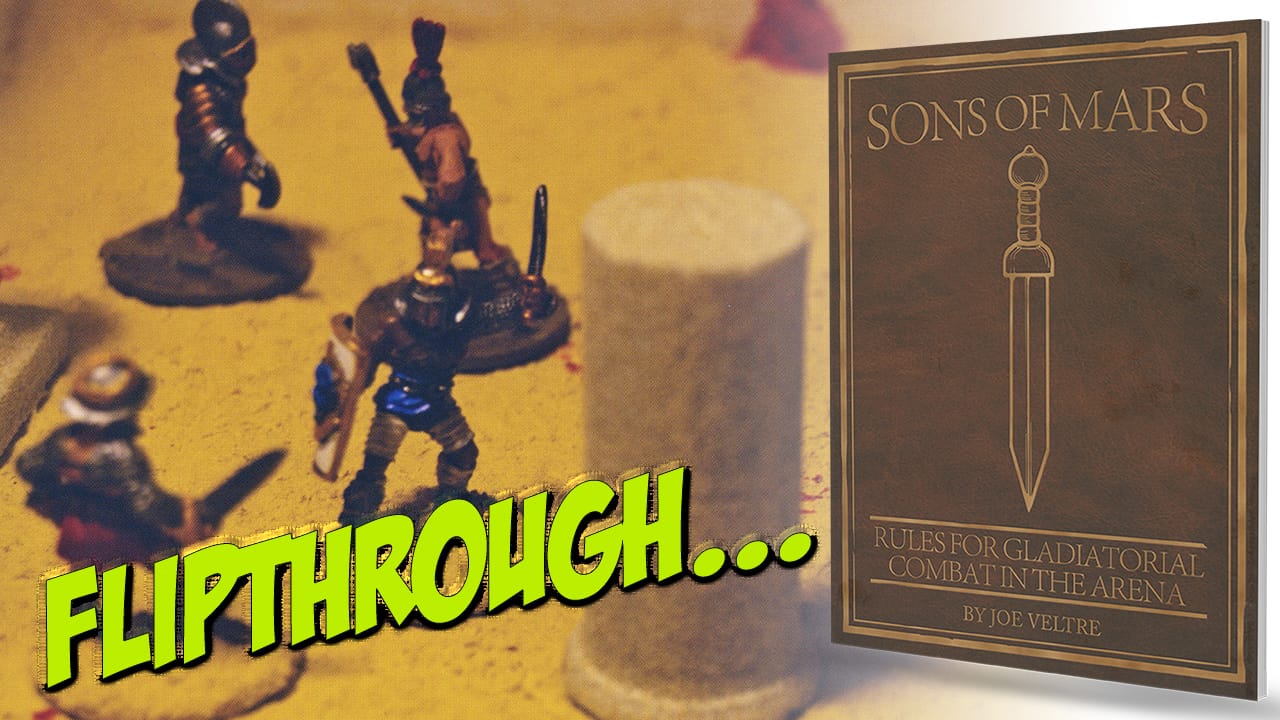 Sons of Mars is a game of gladiatorial combat in the arenas of Rome, designed for use with a variety of miniature sizes and providing a full experience from creating a character up to running your own Ludus.

The chunky softback rulebook begins by outlining the basics behind this D10 based system, then moves onto how to create matches between gladiators. The rules are fairly open, so you can match any type of gladiator from history to any other. Games involve 8 rounds of combat, with each round being a turn and each player gets 2 actions per turn. Once those actions are completed, the next gladiator gets their turn, and so on. Combat continues until a gladiator has no Vitality left or suffers a Deathblow attack from an opponent.

The game works with an Initiative test to define who acts first, by rolling a D10 and adding the Agility attribute of the figure. The main attributes are Strength, Agility or Charisma. Most tests are opposed rolls against other players, with some modifiers being added. The one guaranteed way to ‘win’ a roll is with a Critical success, where a natural 10 is rolled on a D10.

The actions available to a player are clearly named and defined. Movement types include a basic move, running and attacking. There are also offensive and defensive actions, with combat being a case of rolling an opposing number of D10s from a dice pool, and hits being achieved based upon the number of highest values rolled counting as successes. Combat can be one-on-one, multiple combats, on horseback and with primary and secondary weapons.

As combat progresses, fighters suffer fatigue, which modifies the combat results. However, even the most tired fighter can rely upon bonus dice based upon performing actions such as ‘Play to the Crowd’ or ‘Intimidate’ another gladiator. These actions help to create a pool of Favour Dice which may be used to re-roll any dice.

The rules allow for the creation of standard and customized arenas, including Death Pits; basements turned into fighting pits with have their own rules. There are also rules for how to run different numbers of fighters in matches and the addition of obstacles and traps such as Pit Traps, Chained Beasts and more.

After creating your Arena, it’s time to choose your gladiators. A number of ‘stock’ Gladiator characters are detailed in the book, plus there are rules for creating your own character, complete with attributes and abilities. There are also rules for Beast, the animals bred to fight in the Arena for the sport of the baying crowd,

There’s a full set of campaign rules, designed to allow you to chart the progress of your Ludus as a manager. There are sample festivals and rules for employing new gladiators in the form of player controlled and Non-Player Characters and take them through a ‘season’ of growth.

The remainder of the rulebook outlines the main rules for calculating victory and defeat, the consequences of combat in terms of injury, how to randomly arm gladiators and NPCs, and a quick reference sheet, plus a sample scenario for a game and a step by step guide to playing through the rules.

The rulebook is simple to use, if a little text heavy, and contains a solid, open-ended set of rules that encourages the creation of a Ludus, a gladiatorial school of your very own. Simplicity and flexibility are the main features of the rules, making them suitable for one-off and prolonged play.