Sniping in the Great War 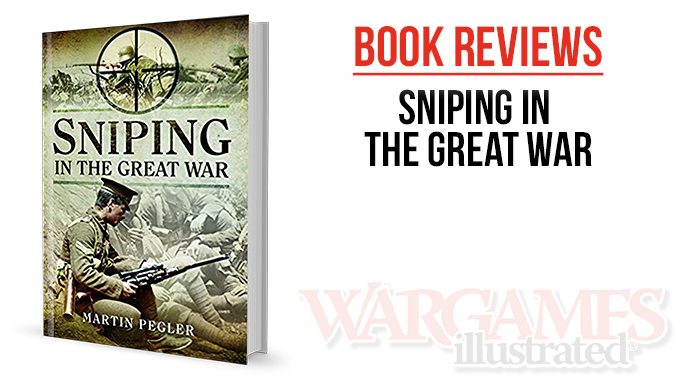 Sniping in the Great War is a 2017 reprint of Pegler’s 2008 book which was one of his series on the weapons of the Great War. It comprises 212 pages including index plus 18 pages of photographs and a short preface. Martin Pegler is a well-known author who has written a number of books and articles on the Great War including several on sniping and he was Senior Curator of Firearms at the Royal Armouries Museum in Leeds. It is clear throughout the book that the author has a mastery of his subject, both of the technology involved and the usage of it.

The book starts with German sniping in the ascendancy due to superior numbers and equipment, then progresses through the trials and tribulations of the Allies until they achieve at least parity in both by the end of the war. Chapters cover Gallipoli and the sniping war against the Turks, Salonica, Commonwealth snipers (an odd choice of title given the status of Canada etc. at the time, and the fact it also includes France), and the book ends with the open battles of 1918 where snipers of both sides could punch well above their weight but usually paid the price for it.

The author sets out the reasons the Great War was at times a war of sniping and why snipers were effective beyond the actual casualties they inflicted. He describes in detail the life of the sniper and how the war was fought, both in general and against other snipers. There is a wealth of detail on life in the trenches in general and for snipers in particular.

Pegler then discusses the various rifles and scopes used by snipers in detail, covering the benefits and flaws of each and while fascinating I suspect the detail is beyond anyone who is not a sniper or competitive shot. Regardless of this the book is written in a very accessible way so that even those like me who have never held a rifle can follow it. Pegler’s command of his subject allows him to cover the mechanics of the various designs of rifle and puts to rest some myths like the “well known” problems of the incompatibility of the Canadian Ross rifle and British ammunition, which I must confess I have parroted in the past.

This is an excellent book well worth a read by anyone interested in the Great War or sniping in general, and since it covers both sides of No Man’s Land I would go as far as to say it is a more useful book than Hesketh-Prichard’s.