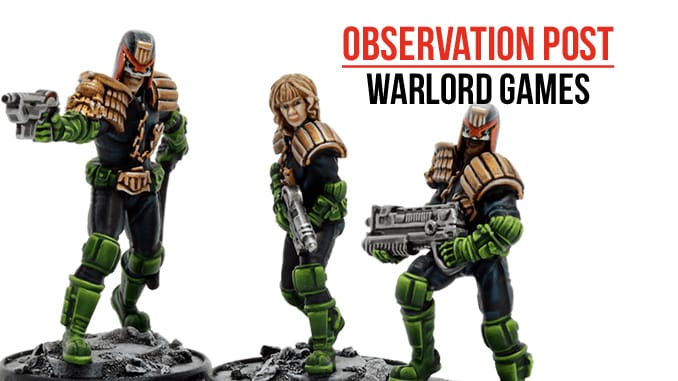 As many will be aware, Warlord Games and Rebellion Publishing have teamed up to produce miniatures and rules for the various characters from the British 2000AD comic book. After releasing the excellent Strontium Dog bounty hunting game, they have turned their hand to producing a game based upon everyone’s favourite future lawman, Judge Dredd. Due out in November 2019, there will be a rules system based upon what is destined to become the ‘core’ rules for the 2000AD universe, plus a whole host of great miniatures, just some of which are shown here.

These new miniatures are some of the best depictions of Mega City One we’ve ever seen.

First, we have Judge Dredd, shown on his Lawmaster motorcycle, the Judge’s transport, street partner and base all rolled into one. The sleek but deadly look of the bike and the appearance of ‘Old Stony Face’ himself is spot on for the tone of the comic.

Of course, its not all about Dredd, so we have three Street Judges ready to patrol the dangerous world of the Big Meg. With their Lawgivers and armour, daysticks and psionic powers, the Judges do their best to uphold the Law in a world full of madness.

Some of the perpetrators of that madness are shown right here. In addition to classic criminal characters such as the brutal and ultra-violent Mean Machine Angel, there will also be more generic adversaries, like this follower of the Fatty cult, citizens who take obesity to the next level as a lifestyle choice.

And lastly, Warlord always like to offer a reward for those who pre-order or buy direct their products, and this release will be no exception. Depicting a classic encounter between Judge Dredd and the twisted Judge Death, this miniature will only be available to those who sign up and buy from Warlord Mail Order.

These look like great miniatures and are just part of the first release in what is planned to be an extensive range. We’ll bring you more updates on the miniatures and rules as we get them. Prepare yourselves citizen – Justice is coming!