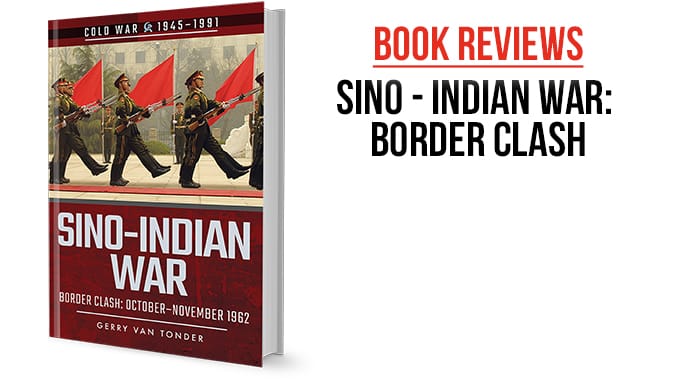 Sino-Indian War is the latest in the Pen and Sword Cold War 1945 – 1991 series and follows the same format as the others. The author is a prolific writer on Cold War topics and this is his fifth volume in this series. The book has 127 pages, 8 pages of colour illustrations and maps, and many black and white photos. There is also an index and a timeline showing the important events along the disputed border.

The book follows the usual pattern setting out the history of the region, the problems caused by previous rulers (the British, it’s always the British) and the build up to the conflict as the two Asian Superpowers grew from their births in the late 1940s to flexing their muscles in the early 1960s. The trigger for the war was the border between China and India once China had invaded Tibet. The border had never been agreed and all parties had differing ideas as to its location, which had not mattered before as no one went into the area anyway.

In the book van Tonder covers the clashes between the two forces in detail as the dispute escalated into an armed conflict. The book has maps and orders of battle which clearly show what happened and would be useful for anyone wanting to re-fighting the actions which are smaller than you might think given the protagonists are the two most populous countries in the world.

The illustrations are a mixed bag, all useful but not always of what you expect. There are very few photos of the conflict, which isn’t surprising given the remoteness of the area so the author and publishers have had to make do what they can get. This means photos of the Indian troops tend to be what is available, even if from the Second World War, but let’s face it a photo of a Sikh with a Lee-Enfield or Bren in British webbing could be from any point between the 1930s and the present day. There are a couple of very atmospheric photos of Chinese and Indian troops facing one another across the border fence, but also one or two of tanks and planes from the present day. The final chapter covers the continuing tension along the 2,600 or so miles of the border and notes the occasional flash points like the crisis in the NEFA in the late 1980s.

The author has something of a scattergun approach with his books, van Tonder seems to go for breadth rather than depth, writing on Cold War topics as disparate as the Berlin Airlift and the Korean War. This means that at times the books can be superficial where van Tonder tells us everything he knows but not everything we should know.

Despite this the book is an excellent introductory guide to the conflict and is a great starting point for wargaming what is a relatively unknown but high stakes war which took place at the same time as the Cuban Missile Crisis.