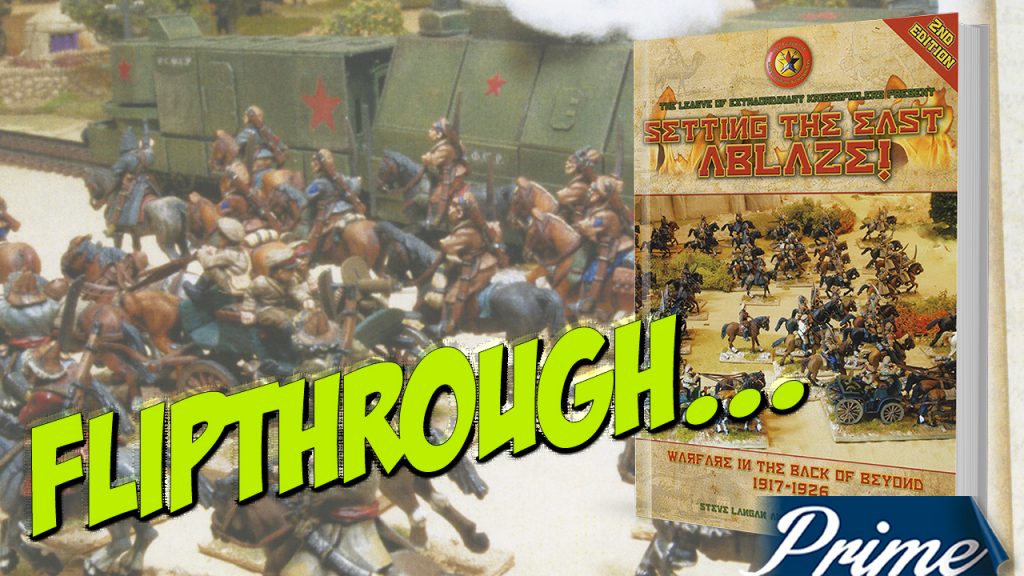 The updated and slightly expanded version of the Setting the East Ablaze rules from Partizan Press deals with warfare in the ‘Back of Beyond’ during the period 1917 to 1926. They cater for large scale skirmish actions, ranging from groups of 30 miniatures all the way up to 500!

Central Asia and the surrounding area was a fascinating part of the world during this period, with pretty much every western power getting involved in a region where Bolsheviks took on the former supporters of the Tsar – Reds versus Whites. British forces clashed with Turks and Germans, Chinese Warlords fought one another and everyone else, and the local tribes formed alliances, empires were created and then fell, often within the same year.

The book begins with a brief introduction, some of the core principles and moves forward to defining units. These are shown clearly and concisely, with plenty of photographs of miniatures.

The rules focus in on the crucial role of Leaders in the game, plus formations and the action card system. The book offers a sequence of play, clear details on movement for ground forces and manages to add in aircraft. Again, all simply and clearly laid out, and very user friendly.

The issue of Morale is a detailed part of many rules but is dealt with fairly simply within the context of these. Leaders and their role in the game are a crucial factor regarding this. Rallying is a major part of preventing the loss of less proficient troops. The rules for Firing are provided, with almost every option covered, and a generic but comprehensive weapons table to cover pretty much every possible type for weapon for the period.

There are clear rules on the use of aircraft. An interesting aspect of the rules is the ‘Table of Terror’, which provides an insight into the nature of the real warfare in this region.

Not many rules cater for the use of armoured trains so simply but with enough depth and opportunity to make them worthy of employment on the tabletop – setting the east Ablaze certainly does however.

A relatively new addition to the rules is the use of not only points values but also some reasonably detailed thoughts on how each potential faction in the area should be organized, equipped and handled. Though not prescriptive, these are a useful guide for those new to the game or looking to expand their armies.

Also included are a series of appendices which offer additional or optional rules for armoured vehicles, civilian mobs and more. A welcome aspect for players new to the setting is a comprehensive ‘starter bibliography’ which embraces both history and fiction, plus some high quality playsheets that are very simple to use.

Simplicity and clarity are the watchwords of this book. Everything is clearly laid out, simple to find and usable, with little or no ‘dead weight’. The colour photographs included add plenty of flavour to the mix and the additions and clarifications in this version of the rules are extremely useful.

The inclusion of sample scenarios would have been useful, but pretty much anything goes in the Back of Beyond, so look to history and Hollywood for inspiration.