Set Your Lasers to Engrave! 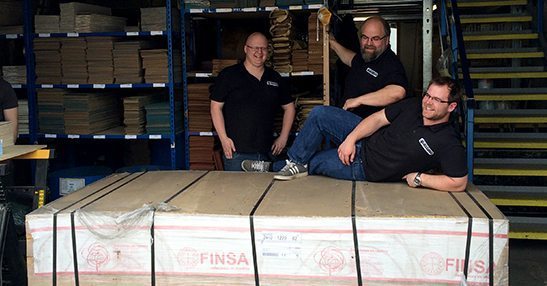 Wargames Illustrated took a trip down to deepest darkest Wiltshire recently to take 4Ground up on an offer of a tour of their factory.

Since turning their hand (or rather their lasers) to the production of Wargaming buildings and accessories four years ago, 4Ground have established themselves as the largest in a group of UK MDF building makers. Employing 16 staff and working around the clock (the night shift was just coming in as we were leaving), 4Ground really seem to be doing something right, which gamers around the world are buying into.

Here are a few photos from our trip…

4Ground was born out of an existing woodworking company – Tyme Again. They produce children’s swords and shields for places like English heritage and Warwick Castle. Here’s some of their stock.

The boys and their raw material

4 Ground get through a lot of MDF! In this photo owners Cad (left) Ben and Adam (reclining seductively) are standing next to two weeks worth of MDF.

More MDF! Cut to size, but not yet laser etched (that’s a big roll of teddy bear/roofing fur in the background).

One of the lasers in action. 4Ground have seven laser cutting machines like this and they are on the go pretty much 24/7. Three more are on the way from Austria to cope with demand.

As well as MDF buildings, 4Ground sell a range of tabletop accessories, including flocks. Last year they shifted 4,500 tubs of the stuff.

And here it is again in component form, about to be packaged up. One of around 100,000 kits 4Ground sells per year.

This is a ‘proof of concept’ for the new ‘Arab Rural Dwelling’. Pencil marks denote where details, like exposed brickwork, will be added.

Many thanks to Cad, Adam and Ben from 4Ground for taking the time to take us on a tour of their facility, and more power to them and their lasers going forward!