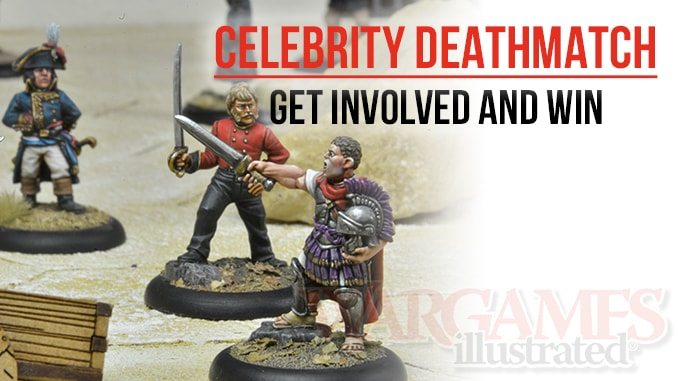 At this year’s Salute show in London on 22 April, the Wargames Illustrated participation game will be ‘(Semi-Historical) Celebrity Deathmatch’. We’d like your help with the rules and will giveaway a FREE Giants In Miniature figure to everyone (potentially 64 people!) who helps out.

The game is rather silly and dead simple; it’s played on a hex board using one each of our Giants In Miniature figures. Each player controls one figure and moves to another to take him/her out of the game, gaining points for doing so. It’s gladiatorial combat with semi-historical heavyweights!

The bit we want your help with is the cards. Each player has four ‘special rule’ cards which relate to their model and we would like you to come up with the rules for each different character/model that then go on each card.

You can present up to four card rule ideas for as many of the characters as you like – just send us one if you like, or (if you’ve got too much time on your hands) a full set of 64. It’s one free figure per person, regardless of the number of rules you come up with.

You will find some samples of the cards we’ve come up with below. Your ideas should follow the same format i.e. title (e.g. A Whiff of Grapeshot), the rule, then some historical/ movie context. You will also see the list of characters and basic rules of the game.

Each model moves a maximum of 2 hexes per turn and may face any direction at the end of their move.

Models have four ‘character specific’ cards, which they can play at any time.

When a model is in a space next to another, it’s player throws a dice to try and hit –

From the front: On a score of 6 a hit is scored and the victim loses 1 life.

From the rear: on a score of 5 or 6 a hit is scored and the victim loses 1 life.

A model cannot enter any hex which contains another model or an obstruction (rock, wagon, barrel etc.) This also applies to knock backs.

There is a lion randomly roaming the board (he moves one hex, random direction, after every player has moved). If he moves into a hex with a model in he will attack it, requiring 5 or 6 to hit/take a life from a model.

A player receives 1 point for each opposition model he kills.

There are piles of gold scattered around the board. If a model moves into a square with a pile of gold he takes it, gaining 1 point.

WHAT WE WANT FROM YOU

Pick one or more of the above characters and then ether leave a comment here, on Facebook or email your ideas to letters@wargamesillustrated.net

If your idea is used you will win a Giants in Miniatures figure of your choice!

So get thinking and have some fun with it.

TOP TIP: You don’t need to be literal with your ideas – don’t be restrained by what weapon the figure is carrying, or what would be physically possible  etc. – think outside of the box like in our examples.