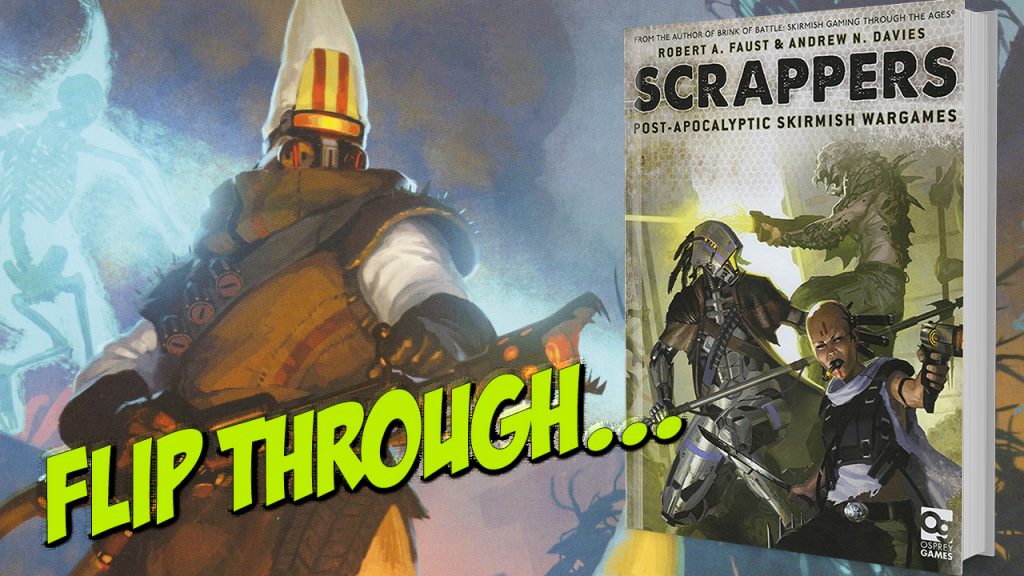 Scrappers is a forthcoming Post-Apocalyptic skirmish level miniatures game from Osprey. In the video (and transcript) below we flip-through the book and report on our first look.

Imagine a world where our world ended in blood and fire, where those who survived were often changed beyond all imagining and where the past is mis-remembered by their descendants. This is the world of Scrappers, the upcoming post-apocalyptic skirmish level rules from Osprey Games, set 150 years after a global cataclysm that changed our world forever.

The book provides a potted history of the game world, information on what is needed to play, rules and examples of how to create you Scrapper Crew and how the different types of gear work in the game.

A useful feature is the fact that you may use any suitable miniatures for the game, from a range of different lifeform types and encompassing all sorts of abilities. This means that no two Crews will be entirely the same and there are a number of different potential settings. You only need a small number of miniatures for each crew.

As you would expect, the book has some great artwork and photographs of miniatures from a range of manufacturers. The weapons table contains a host of different options, from Common to Scarce, and the Artifact weapons of the past. After all that wealth of background and other information, the rules begin on page 83, with play being divided into a series of steps and action phases.

Rules for every type of combat encounter are clearly laid out, with some really clear accompanying diagrams. There are also rules allowing you to create a whole campaign for your crew, including random events as a result of your actions and the accumulation of scrap tokens – the leftovers from the past.

In addition to the high quality photographs of miniatures and artwork, the overall look of the book really exudes a thematic atmosphere, adding interest as you read.

Overall, this is a slick, easy to use rulebook. In a sense, you could compare this to the Frostgrave rulebook, perhaps saying that Scrappers is to Post- apocalyptic sci-fi what Frostgrave is to fantasy. However, the gameplay is very different, the background and setting are unique and the in-built campaign system takes you to a whole new level of adventure.

We will feature Scrappers as a Rules Showcase in the magazine giving it a more detailed play through as soon as we can.