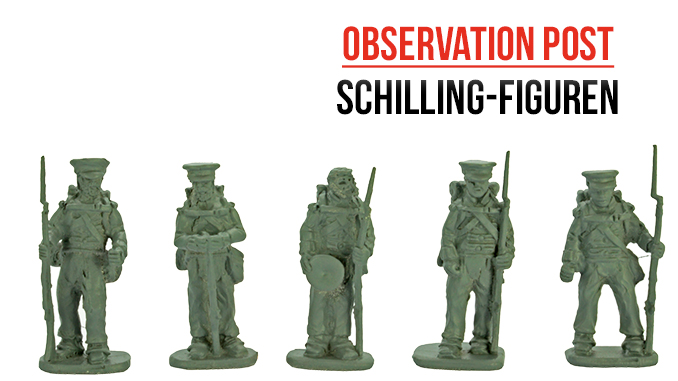 Schilling-Figuren of Salzgitter, Germany has been sculpting quality 28mm and 1/72 miniatures for a long time.

Their latest additions include the Prussian Landwehr seen above. The six figures from the two different packs shown here are depicted firing, loading or standing at rest.

The attention to detail in terms of uniform, equipment and pose is of a very high standard. The muskets are depicted as fitted with bayonets, giving them a very warlike appearance.

We caught up with Urike from Schilling at the recent Tactica convention in Hamburg, and he showed us his other ‘neu’ items on the stand, included this range of wagons (below) from Franznap (carried by Schilling-Figuren), as eclectic as they are finely detailed and  including pontoon bridge carriers.

Of course, those pontoon bridges aren’t going to make themselves! Here’s the men (below) who do all the work. Again Franznap figures, carried by Schilling-Figuren.

Finally, here are some figures manufactured by Schilling-Figuren themselves (below), their new 1:72 Egyptian and Hittites.

The sheer variety of the figures available from this company makes the website worth a good wander around.