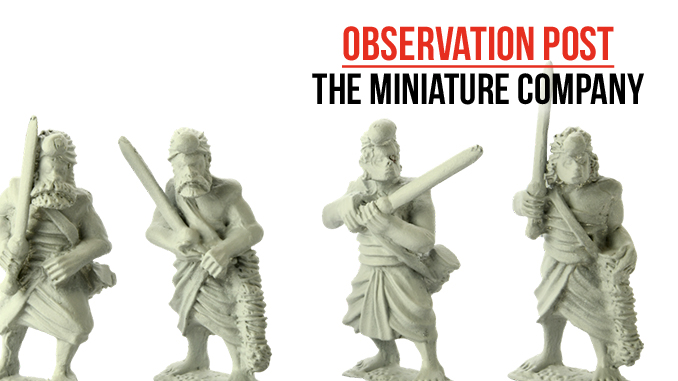 The Miniature Company are a small, family run UK company which produce figures in 28 and 10mm. Previously known as the Miniature Design Company, they offer a number of different periods. The samples sent us for review are packs from three of their 28mm ranges, Dark Age Saxons, Dark Age Welsh and Ancient Indians.

The Ancient Indian figure samples we have come in two packs, one labelled Indian Tribal Bowmen and the other Indian Armoured Swordsmen. Each of the packs consists of 4 figures, very crisply cast with little evidence of mould lines. The bowmen are depicted in typical ‘kilts’ of the era and are either preparing or loosing their bows. The Indian Armoured Swordsmen are posed with swords ready, with dhoti ‘trousers’ and typical light armour that covers their torso only.

The Dark Age Saxon samples are four Fyrd Spearmen. Each figure is cast with open hand and comes with a shield to cover the left. No spears are provided, but these are posed to form part of a line of unarmoured warriors.

The Dark Age Welsh pack is at the opposite end from the Saxons, representing three more ‘noble’ folks, and labelled Welsh Armoured Command. There are two leaders in chainmail and helms, with shields which may be attached. One figure is cast with an open hand for a spear, whilst the other will need some work to drill a suitable hole. No spears are provided. The third figure is monk, with robe, tonsure and Christian cross on a staff held in his right hand. His left hand is posed palm outward, perhaps blessing warriors as they go into battle or attempting to ward off evil. This figure is particularly well sculpted, and offers some character to a suitable command stand.

These figures may not be entirely ‘new’ but are part of ranges that will soon be expanded by this new iteration of a company from the past. The company website is well worth a visit for those interested in the various periods on offer.