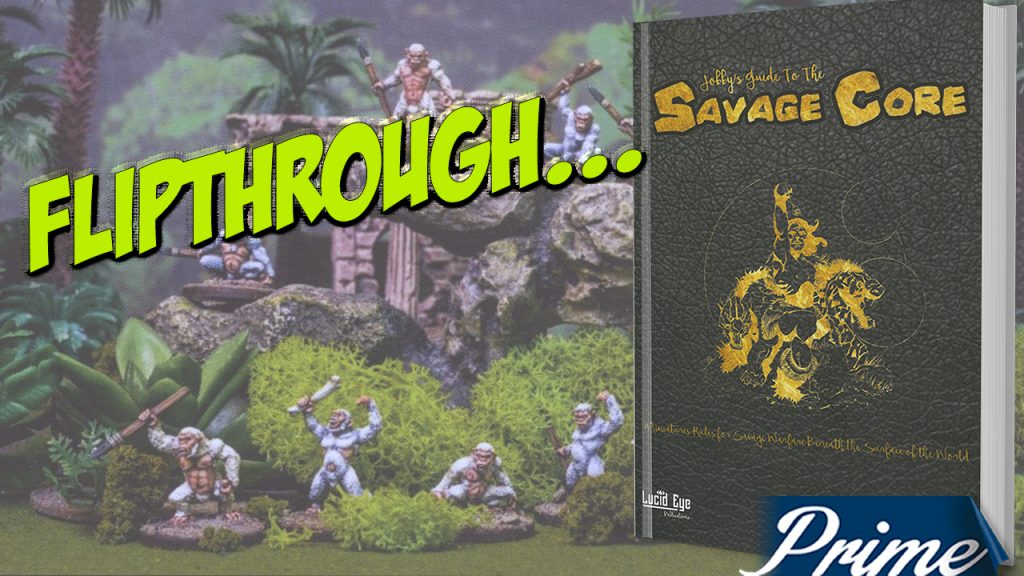 This new rulebook from Lucid Eye Publications allows gamers to enter the subterranean or lost world created by sculptor Steve Saleh and his son ‘Jobby’.

The first part of this A5 sized paperback book outlines the basic setting and the main Factions within the game. There are five Factions in this initial release, the Atlanteans, Amazons, Neanderthals, Cro Magnons, Jaguar Tribe and Simians. Players pick a Boss and six Bods from a Faction, giving them seven figures to use in all.

The rules themselves are relatively straightforward and use a ten-sided dice for all rolls. A basic turn is divided into five phases, Initiation (player action order), Double Trouble (same die roll results in an Encounter), Tricky Customer (using relics and abilities), Movement, Close and Ranged Conflict (melee and shooting) and Conflict Results.

The Double Trouble phase, which happens when both players roll the same Initiation result, means that an encounter takes place with other characters, creatures or events. These are diced for and have an effect upon the game, as detailed in the relevant text.

Each type of character has a set of stats, with the higher stats being the most useful. Example stats for a Boss (leaders) and Bods (the basic warriors) are shown here.

Each Faction has its stats, special rules and Tricks listed. Tricks are the relics or special powers that may be used by your tribe during the relevant phase.

There are also five scenarios outlined in the book, which provide the basics of a set of games involving any of the Factions.

As the premier offering from Lucid Eye, this is a fast paced game with an interesting premise. Perhaps a little more careful proof reading and a few more images would have helped but the game system appears sound. The rules are complimented by some excellent miniatures from sculptor Steve Saleh and are available from the Lucid Eye website, Warlord Games and Arcane Scenery and Models. Arcane being the exclusive distributor of this book. There are plans to offer more scenarios and Factions in the future, plus references to another setting for a different type of game under the Lucidea, Psychedelic Future History label.