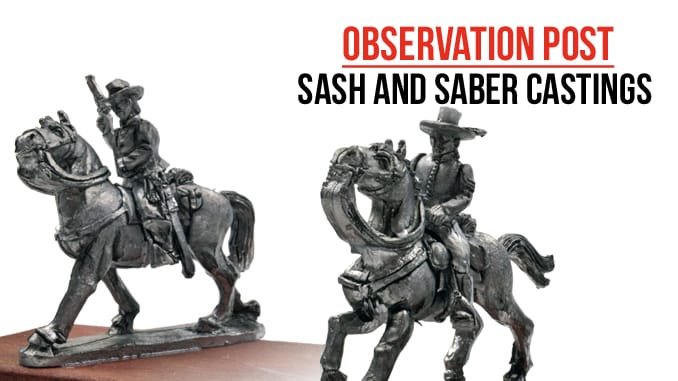 Sash and Saber Castings continue to add to both their 25 and 40mm ranges with these mounted miniatures, spotted at Historicon 2018.

The American Civil War continues to be a popular period but Sash and Saber go further than most by attempting to cover as many theaters as possible. Amongst their new releases for the Trans-Mississippi and Western Theaters are these two packs of 25mm Mounted Cherokee Rifles, seen below. Many of the Cherokee sided with the Confederacy, whilst others sided with the Union. Serving as scouts and mounted infantry, these warriors served with honour during a number of battles, proving to be a valuable asset.

These miniatures are in European style dress but have the long hair and some of the traditional trappings of the tribe, alongside military tunics and rank insignia. The Command unit consists of four figures, an officer, bugler and two Sergeants. The four other ranks are in more civilian clothing and are armed with a variety of weapons. All their mounts have the relevant tack and saddles for the period. These are well-sculpted renditions of members of the less well-known forces found in the American Civil War.

The two packs of 40mm miniatures (seen below) are Canadian Light Dragoons, a command and trooper pack consisting of three miniatures. They are based upon units from the War of 1812, and wear Tarleton helmets. The command pack has an officer with raised sabre, a standard bearer and a bugler. The other is a pack of troopers whom also wield the sabre. These are typical of the mounted units who served as part of the Anglo-Canadian forces during the 1812 War and elsewhere within the burgeoning Empire.

These are well-animated miniatures with attention to detail in saddlery and overall equipment. It’s hard to cover up errors in sculpting at this figure size but these are very well done, with good proportions and well-sculpted horses.

These are just two of the most recent additions to those on offer from this always active company. A browse on their website is always worthwhile for those looking for both the obvious and less well-known units from history.