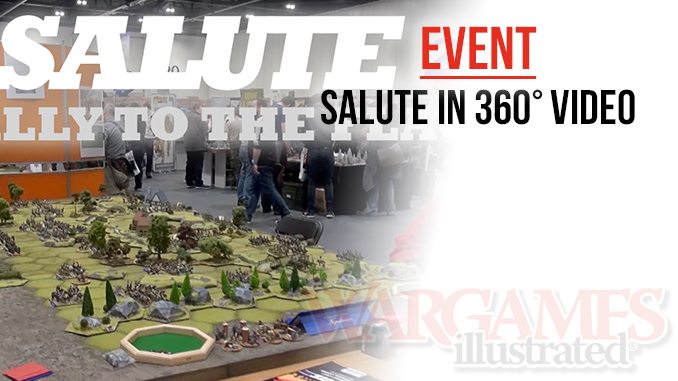 Check out some of the videos we made of the best tables from the show.

The videos work via YouTube with the following browsers; Chrome, Firefox, Internet Explorer, and Opera.

On a PC or Mac – use your course to move around and explore the table.

On a tablet or phone – use your finger to swipe around and look around OR just move your device.

Follow us as we wander through the hall at about four O’clock in the afternoon.

Siege of a Japanese castle showing a full-size Tenshu (Keep), naval assault and a broad spectrum of siege equipment from the period.

Timed, push-your-luck game, where participants play as humans or dinosaurs in an “amusement-attraction-gone-wrong.”

This game won three awards on the day – Most Innovative Game, Best Participation Game and The Salute Shield (best in show).

Battles between warbands in the Fabled Realms. 4Ground had several playable demos of their forthcoming fantasy skirmish Kickstarter game.

The armies of Ptolemy IV and Antiochus the Great clash near modern Gaza. Using Simon’s ‘To the Strongest’ rules.

Landings in San Carlos Bay, East Falklands, by SBS and tactical advisors, under cover of darkness, attempting to neutralize Argentine threats to the main landing planned at daybreak. Using adapted ‘Living on the Frontline’ rules.

Refight of one of Frederick the Great’s greatest victories; flanking of the Austrian army giving a tactical advantage.

Command an Empire or Rebel fighter, dogfighting above the vital planet Scarif helping to decide the fate of the galaxy.

The Gentlemen’s Wargames Parlour – Lefthand Down a Bit

The Royal Navy’s flagship carrier HMS Eagle and escorts are targeted by submarines and MTB’s of the People’s Navy. The game was set during the ‘what if?’ Very Britsh Civil War.

The Friends of General Haig – English Civil War (in Scotland!)

As part of the Warlord Games demo team, the Worcester Wargames Club (AKA Friends of general Haig) played a Pike and Shotte game set during the ECW in Scotland.