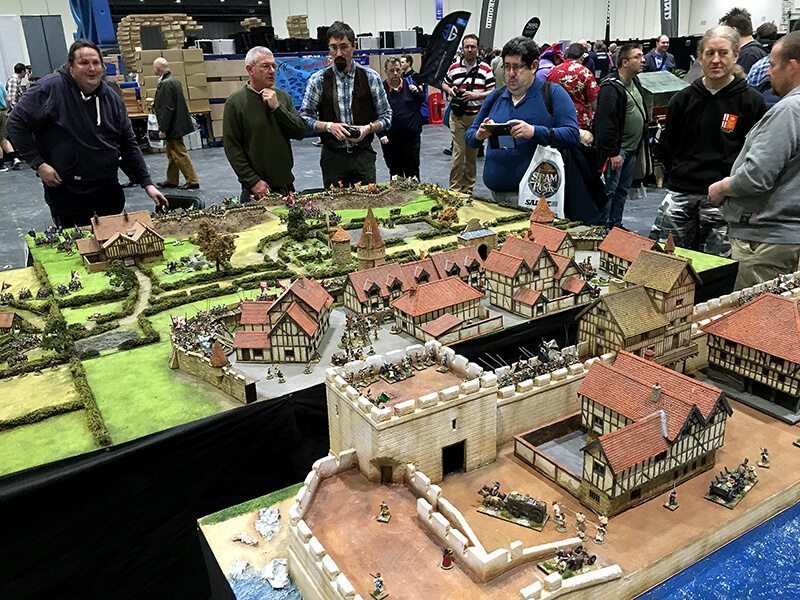 So, in the blink of a blurry eye Salute 2016 has been and gone. For the WI team it was a great day, meeting our readers, running the Hobby University* and the Participation Zone and getting to see some great games.

In the forthcoming two issues of the magazine – WI335 and WI336 – you will see a full report on the show and some in depth photos of the best games and painting comp winners. WI Prime and Interactive readers will also see get to see videos of some of the best games from the show. But for now here’s a quick look at some of the action from the show via our point and shoot camera.

P.S. It goes without saying these photos barely scratch the surface of what was going on at the show!

*Big thanks to Victrix, Warlord Games, Perry Miniatures and Warlord Games for helping us out with the Hobby U.

Eager gamers queuing to get in

A helicopter view of the hall (just prior to kick off)

The Wargames Illustrated sponsored Mad Max – Stop the Truck game (WI Prime Members search the Vault for ‘Stop the Truck’ to see more on this game).

The Wargames Illustrated sponsored Sidewinder Air Combat game (released by Caliver Books in the Summer, more on this forthcoming in WI)

A Stop the Truck game in full swing

Wargames Illustrated ‘Saving Prince Kashin’ game. This board was a ‘recycled’ version of our Gettysburg Little Round Top hill from two years ago. For more information on the recycling project see WI342.

The last few packets of our Michael Perry designed free sub figures. Available next at Historicon (… then Crisis, then Tactica)

The Wargames illustrated sponsored ‘Go Team. Go’ Team Yankee game presented by Captain Kitbash and the Leicester Phat Cats. (Thanks to Battlefront Europe for their help with this one).

The Battle of Wilhelmstadt game

The Battle of Wilhelmstadt game

The Battle of Wilhelmstadt game – WI Prime members – search The Vault for ‘gaskin’ to see loads more of Bill Gaskin’s stuff from the back issue pages of WI.

Over on the Battlefront stand, top figure designer Tim Adcock was sharing his secrets with the public

From screen to plastic production – Tim tells all

Going, going… Battlefront ‘Tanks’ game was flying (or should that be rolling) off the shelves.

Busy young wargames at the WI Hobby U

Ian Smith and Friends, The Battle of Adrades, Peninsular war 1811. Based on the Sharpe books

The Battle of Adrades. We are going to be featuring this game in detail in a future issue of the magazine.

The Perrys and The Snook at their stand

Ron Ringrose and the Essex Gamesters present their Nam game. Check out the current issue of Wargames Illustrated (WI342) for much more on this game

The new “Tower’ from Renedra

Gates of Antares (with it’s creator Rick in the background)

Another Gates of Antares table

More on this table in a future issue of WI

The rather massive 4Ground stand