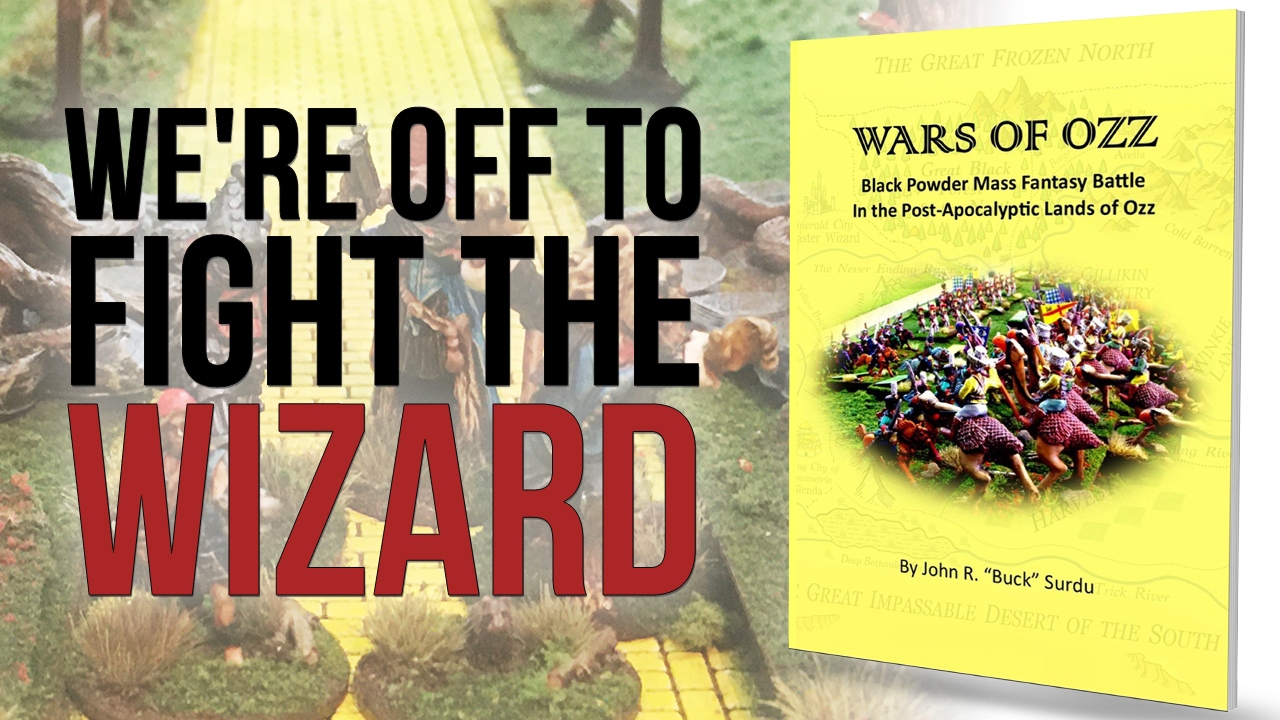 Released by Sally 4th, written by John R. “Buck” Surdu, and backed up by a wide range of new models by Old Glory, Wars of Ozz is a 120-page softback, full-colour rulebook for a new fantasy/historical(ish) wargame.

Dispel all thoughts of Judy Garland, skipping her way down the Yellow Brick Road, though. This is a quite different story and a rather different Land of Ozz, closer to the original books from L. Frank Baum, but given a post-apocalyptic spin. We’re introduced to the background from page 8 (after a comprehensive list of the book’s contents) – The History of Ozz section bring flavour text about the world along with a two-page map.

The Last Great War ended with Madness Bombs, which ravaged the world, brought about mutated races, and (over the evolution of a few centuries), brought Ozz closer to its current state. The arrival of the Wizard Zoraster in the West and witches in the East then unified some lands and divided others, while King Jack and his pumpkinheads held their ground in between.

Onto the Lands of Ozz – starting on page 13 – giving detail of each of the four major races and showing a large double page spread of an army for each.

There’s Munchkin Country – the Munchkin’s army is the Work of the Wizard himself; Winkie Country – part of the Witches Alliance; Gilkin Country – the force most strongly associated with the beasts of Ozz; and the Kingdom of the Quadlings – the subjects of Witch of the South, the Lady Glenda.

There’s also Chronometria and the Provinces and the Independent Kingdoms – bringing in all kinds of other bits. In all it’s a huge amount of background detail, taking up about a third of the book in all, finishing on page 46.

A setting ripe for you to do battle over, then!

At page 47 it’s time for the rules. A brief aside first – there’s a Designer’s Notes article, written by the people behind the game, in Wargames Illustrated 397. That’s our January issue, which sold out in a flash, but it can be seen in the Vault on our website (along with almost 400 other issues) if you have a Prime subscription. Deeper rules details can be seen in that article – here we will try and give a slightly wider overview and talk about how the book presents things.

And, in short, they present them very well when it comes to usability. You might have noticed that the sections get their own reference numbers – these extend to sub-sections and sub-sub-sections. So, the Rules are section 3, the Units and Attributes sub-section is 3.1, then the Normal Unit Composition section is 3.1.1, and so on. This makes it rather simple to skip about and find what you’re after by consulting the contents.

Initially the rules examine that composition – models are mounted on 50mm square bases and regiments generally consist of a number of these bases, along with a mounted leader – the Regimental Commander who is individually based on a round. Four infantry figures go on a square base, two cavalry, or large creatures (such as giants) just one.

Next it’s the stats – Marksmanship, Melee, and Resolve are obvious. Luck is about survivability in combat, and Spell reflects casting abilities, although this is a game of reserved magic in all – not much in the way of fireballs flying around. Bases take damage – 4 for all except artillery, which takes 1 per base, then get removed. Simple stuff!

Army composition on page 49 gives several ways to construct your force and on page 50 there’s a huge table of unique abilities for your Regimental Commanders – a simple way to really mix up the play – and another for Brigade Commanders.

Looking at the table is a chance to talk about at another element of the book’s design – tables, other imagery, and diagrams. They work well enough, but they have a bit of a ‘blast from the wargaming past’ look to them. At times they are striking, with some bright colours, but they can feel slightly unrefined. This isn’t the end of the world and the content quality is the most important thing, of course, but when other publishers are making seriously gorgeous books these days, it does stand out as the one part of this book that could perhaps have been improved.

Anyway, to round out the leadership abilities there’s the Overall Leader – more ability variation here and by combining the different elements there’s tons of versatility available.

Moving on, past the Unit Record charts to keep track of those details, we get into the rules proper. Reaction tests are a key feature, allowing the unit that is being acted upon to perform some kind of reaction (varying depending on the action and the specifics of the unit itself, with different races generally reacting very differently).

Onto Activation which feels like a key selling point of the game here – there’s an activation deck and leaders use their command radius to direct ‘In Command’ units that fall within it, rolling a D6 for each ‘In Command’ unit. These dice are placed with the leader as a Command Dice Pool.

A D6 is also rolled for each ‘Out of Command’ unit but these dice are placed with the units – this means the commander is not able to influence them when they activate.

An activation deck is formed of a set of red cards (1 to 6), black cards (1 to 6), and two jokers. Each army is represented by red or black (decided at the start of the game) and the first card is turned over. If an out of command unit has a dice that matches this card (taking the colours into account), it is activated, but if there are one or more dice in the dice pool that match the card turned, the player can allocate whichever matching unit within the brigade they want to activate next. It’s a bit tricky to describe – hopefully we managed to do justice to it.

We’re going to skim over areas such as Formation, Movement, and Routing – running from pages 57 to 60 as they work mostly as you’d expect if you’ve played any other … well, the easy comparison is your favourite divisional level Napoleonic game. That’s what Wars of Ozz, once you scratch at the fantasy stuff wrapped around it, is at a core level. And it seems to be an intriguing, fun, and well-designed one at that.

Likewise, the rules for shooting are solid and mostly what you might expect. They (and all the other elements of the game) are illustrated with very useful example pictures that clear up anything that might otherwise prove confusing or obfuscated.

It feels a bit rude to rush through vast swathes of rules by saying “they’re like other successful Napoleonic games” but… well, they kinda take good bits from various ones and put them together in interesting ways and without making an hour-long flipthrough it’s the easiest way to cover it!

So, through shooting and melee, with more useful examples of unit matching in melee on page 69, and multiple unit melee on pages 72, that’s the core rules.

Next some of the fantasy bits that you won’t encounter in your Napoleonic game of choice – flying beasts and floating balloons – get covered. Some nice options here for units that go some way to defining the uniqueness of certain races and their styles of warfare.

Magic starts on page 75 – yes there’s magic but this is still, essentially, a horse and musket wargame. A set of spells is included for wizards and witches but they generally affect the attributes that define units (Marksmanship, Melee, Elan, and Resolve) as well as movement. Others, such as Transport, allow the spellcaster to move a unit. Spell-casters impact battle but they are more likely to reduce an enemy unit’s Resolve before a friendly unit charges them than immolate your opponent’s flank! Two pages of spells round out the rules.

So at page 78 the slightly deceptively named Uniforms and Organisation section has the army lists. Lots of photos of models on the battlefield for the four races as well as tables that list the many and diverse troops.

The Munchkin are the best shots in Ozz, reflected in their high marksmanship attribute and the likelihood that they will stand and return fire when they are shot at or charged. A Quadling Army is based around large numbers of militia infantry with the occasional elites and they can use Eagle Riders. The Winkies are aggressive – good fighters in a melee and their most common reaction to coming under fire is an enthusiastic, frontal charge. Gilikin have a well-developed artillery corps, field cavalry on trained mountain goats, minor witches and wizards and a whole host of beasts.

From page 88 the book covers Introductory Scenarios – three options for players to have a go at – but the book suggests that just about any historical scenario could be converted to use Ozz units. More cool photos are shown here – battles in progress with masses of unusual fantasy units look great.

There’s a Creating Scenarios section with a generator, terrain run-down, and game board ‘building blocks’ of sorts, that can be put together to vary up the overall feel of your tabletop. It’s a great addition that rounds out a generous and packed offering. It’d be great if things ended there but there’s more, and a perfect addition for the times we live in – solo play!

This creates an AI sort of gameplay style, through a mechanic called Posture that influences the decisions of the non-human player. It represents the attitude of the – engage air quotes – “opponent toward the game, reflecting the decisions that a human opponent would normally make. Game events and results influence Posture, and Posture is reflected in the actions units take. Posture is a numerical value, evaluated at the end of every turn, and the number can result in a range of behaviours, chosen to reflect the confidence of the “opponent”. More confident Posture will result in an enemy who is more likely to be active, advancing and probing. Less confident Posture will lead to reactive strategy, defending objectives and returning fire.

And now we really are done… except for various play aids that will all prove useful in your gaming. They look quite heavyweight but there’s a lot here that comes up quite organically in moments of gameplay – you won’t, generally, be cross-referencing too much in gameplay.

And now we’ve followed this Yellow Brick Road to the end and … oh dang, this flipthrough has more endings than The Return of the King! There’s a mention of Things to Come on page 112 – taking a less standard route of changing up these ‘fantasy’ rules to work in a historical setting – and links to the different Ozz community things on social media.

And that truly, really, is everything!

Wars of Ozz is an intriguing new game, with some very cool and rather serious systems working away under the cover of what may, to some, seem like a rather whimsical style. Those who would dismiss it because of that, in favour of more ‘proper’ wargames would be missing out on a game that brings some pedigree and quality to the tabletop.