SAGA Priests and Heroes Of The Crusades 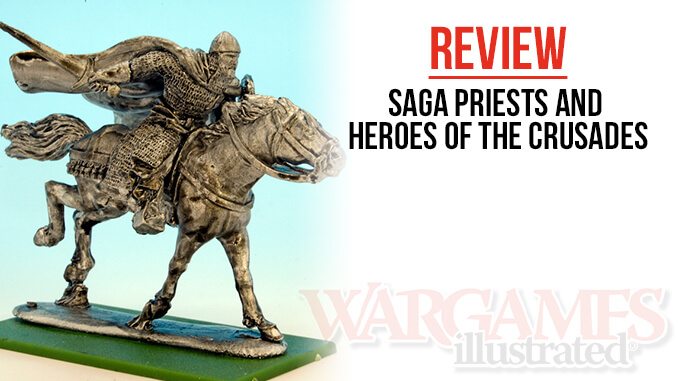 Each of these six packs contains one character figure. For the Priests, you get one Pagan, one Christian and one Islamic on foot. In the Heroes, you have El Cid, Saladin and Peter The Hermit all mounted on beasts that are suitable for their station. And, when I say ‘character figure’, I mean character figure! All of these figures have full rules for their usage in the relevant rulebook.

Each miniature exudes a sense of dynamism and captures the subject very well. The Priests aren’t just standing around looking pious, these are warrior priests supporting their respective flocks. The Heroes look suitably heroic, with El Cid and his destrier charging almost full tilt into combat, Saladin’s horse rearing as he brandishes his sword and even Peter The Hermit holding aloft the symbol of his faith from the back of a suitably bored looking donkey.

PROS: All the figures are well sculpted and the posing is excellent. The frenetic nature of each pose really makes these collectibles rather than simply gaming pieces.

CONS: I query the usefulness of the Peter The Hermit figure as a ‘wargame’ piece and his small donkey appears to be overly burdened. Perhaps a call to the RSPCA is in order?

SCOPE: The Priests would quite happily fit into any suitable army for the Early Medieval period and the three Heroes are great renditions to use as leaders in their own context.

Thanks to Gripping Beast for supplying some of their original concept art for these sculpts.