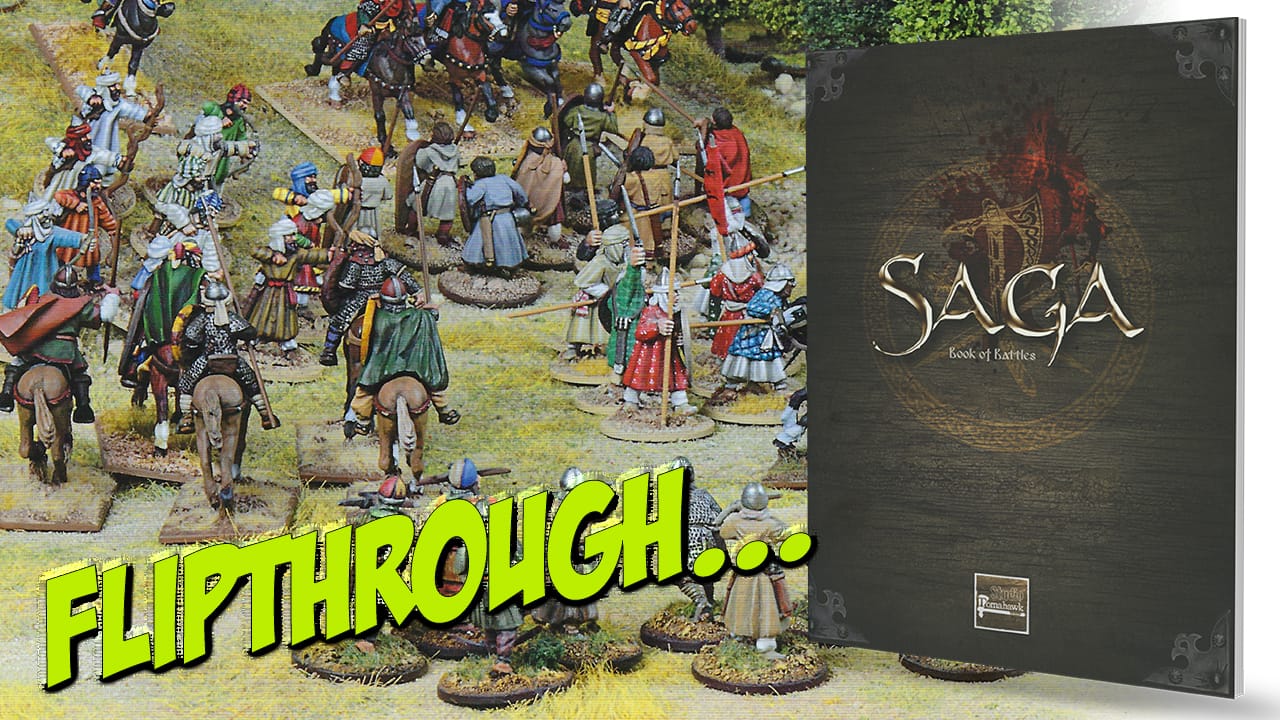 The SAGA: Book of Battles contains scenarios and rules within an A4 softback book consisting of 55 pages. The introduction to the book informs us ‘The Book of Battles is a unusual supplement. It is not a SAGA Universe, but a collection of scenarios and game variants that can be applied to any Universe in which you decide to play’.

There are five sections within the book, the first covers Skirmish level games, the second deals with the more usual two player Battles associated SAGA, the third deals with Legends – a more narrative approach to games, the fourth with multi-player Mass Battles with three or four players, and the last offers a set of campaign rules to create your own ongoing Sagas.

Also on offer are three different sets of ‘rules’ to calculate victory, massacre, conquest and survival points, which relate to the scenarios offered in the book. These are followed by some clearly defined ‘universal’ rules for setting up the gaming table, and then we’re into the first major section, the Skirmish rules and the single scenario they support.

The skirmish level Battle of Heroes section consists of five scenario areas with up to six ‘variables’ per area.

So, for example, the setting up scenery area can be done using different rules and layouts, and players may find themselves fighting across such terrain as Marshy Country, Rough Ground, Bleak Moor and three more set ups. In this way, although there is one core scenario, there are a host of combinations, which means that no two games will ever actually be the same. There are options to randomize the set up process even further, with die rolls and tables to follow. Every aspect of the process is well defined and clearly explained, making these great options for open gaming and tournaments alike.

The Battles chapter begins with some new rules, adding a number of aspects to the SAGA gaming experience and used in many of the 10 scenarios presented. Each scenario makes use of simple to follow set up and deployment rules, and special rules and suitable maps. Some of the scenarios are one page affairs, whilst others are two page spreads.

Moving onto the Legends chapter, we have more detailed, narrative style scenarios, designed for more open gaming rather than tournament play. These are the adventures of a Warband, where taking part in a tale of heroes is more important than simply winning. To aid with these adventures, a host of new rules for terrain, such as entering and using buildings, raiding for livestock, the effects of night and more are included. Again, many of these rules are used in the accompanying scenarios.

The Mass Battles section is particularly interesting, as it adds new rules and scenarios to add additional players to games. Moving past the established ‘one vs. one’, there are options for gaming with three or four players in total, sometimes working in teams but often pursuing their own agendas. This would make for a very different gaming experience for many players.

The last chapter, Sagas, is brief but useful for those looking to add a new dimension to their SAGA gaming. In essence, it’s the possible culmination of all the other chapters, providing a toolbox to help chart the life and times of a fully rounded Warlord, as a character whose fortunes wax and wane. Experience points, individual skills and Domains, all are provided.

Overall, this is another very well laid out supplement from Studio Tomahawk. The different scenarios, new rules and ideas all combine to add even more depth to a game which already has a large slice of atmosphere. The artwork and photography is excellent, but it is the ease of usage that really shines through. The fact that the book caters for both tournament and open gaming experiences also makes this a supplement which every SAGA player needs.

Death in the Dark Continent Lite