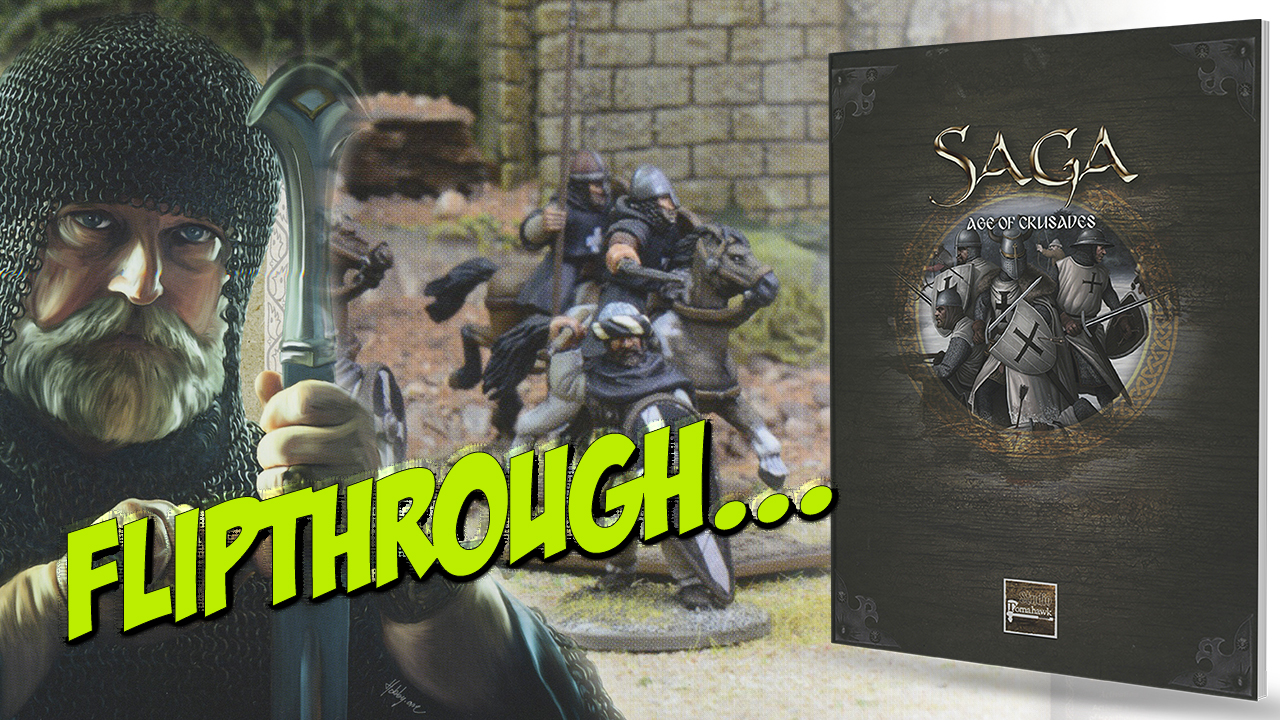 Studio Tomahawk’s new Saga Universe SAGA: Age of Crusades details crusader warfare in the Levant, in Spain and in the Baltic. There are 12 factions, Mercenaries, Legendary units and mysterious Acts of Faith which fill this book, following on from the same format as the previous ‘Universe’ release; The Age of Vikings.

The book begins with a map and overview of the period, which helps with a basic understanding of the factions and their locations. Next comes a useful guide to how to use the supplement and a brief overview of what is new or different.

Something new is a guide to the different Factions in the form of a chart which uses stars to assess the difficulty level of the gameplay of each one, plus a pictorial chart of the dice required and how D6 may be adapted if players don’t have the special SAGA dice.

The supplement then moves straight into the Warband lists, providing each Faction with an overview of the troop types, special rules for that Faction, a quick reference chart for the unit types and information for the usage of legendary units associated with the Faction. There is also a useful FAQ guide for each one, using the character of old campaigner ‘Brother Galon’ to offer responses and commentary.

Having dealt with what the authors call the ‘main actors’, there then comes a section entitled Old Friends, New Enemies. These take four Factions from the Aetius and Arthur: Age of Invasions and Age of Vikings books, plus adds two variant lists for the Crusade against the Cathar heresy. In this way, you receive 6 more potential Factions which may be used with the core rulebook to offer alternatives. The information given is much shorter but matches the style of the main Faction lists.

The last few pages introduce new equipment and auxiliary characters / units which may weave themselves into warbands, and has rules for using various Acts of Faith from the main religions. These allow you to vary the style of your units, add new models and gain advantages during battle.

This is not only a well laid out, attractive hardback book but is also very easy to use. The explanation of the rules and the key gaming elements for each Faction are simple to reference, and the character of ‘Brother Galon’ is a perfect way to deal with the majority of questions which players may have.

The book itself is a robust hardback and comes with all the Battleboards for the main Factions described in this particular ‘Universe’, allowing players to experiment, progress from the noted ‘easy’ Factions onwards, and gain an insight into what to expect from their opponents. Overall, this appears to be a well-thought out supplement to the core rulebook and one which is of use to every player.