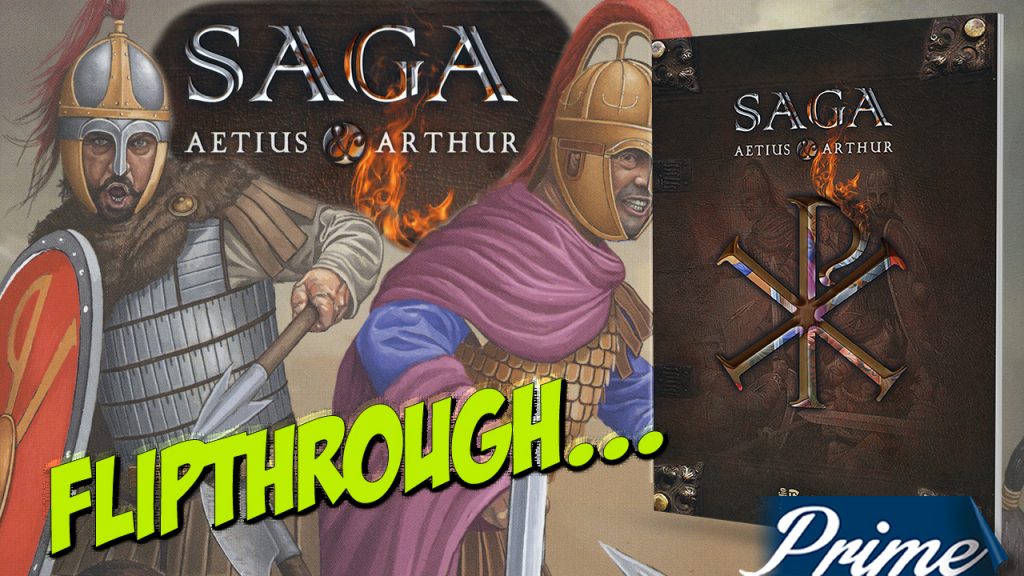 Hot off the press we have received a copy of the latest supplement for SAGA the massively popular skirmish game by Studio Tomahawk – Aetius and Arthur. We’ve not even had time to play it yet but we did want to get out a quick flip-through, so our Prime members could see what it’s made of.

OK, so it’s a hard cover 86 page book that comes packaged with six new SAGA battleboards. On the back of the book we are told “In this supplement you will find”

One thing to stress early on is that Aetius and Arthur is a supplement – you will need the main SAGA rulebook to play.

So let’s start turning pages and see what we have inside. Following a map of the area we are concerned with we have a two-page potted history of The Age of Invasions, which frames the epoch covered in the book, namely 406 – 476AD.

How to use this supplement informs us that we are going to be introduced to six new SAGA factions, which are designed to be played against each other, BUT which can be played against existing SAGA faction, although this does come with a warning regarding possible balance discrepancies in games played for example between 5th century Romans and 11th century Crusaders.

We them move onto the meat of the supplement which is the six new factions. Beginning with Romans.

The first faction section begins with a description of that warbands Battleboard. For those of you unfamiliar with the SAGA system the battleboard is a massive and innovative part of the game. SAGA dice are rolled each turn and placed on different areas of the board to create different special actions which your units can perform.

We begin the Roman faction section with a description of the Romans in our period of interest, followed by an explanation of the different troop types available to the Roman player.

We then have some special rules concerning the faction’s troops and an explanation of ‘Impetus’. This is a unique Roman ‘Special Value’ but similar to tracking systems we have seen on other SAGA boards, like the Jomsvikings. Impetus is used in conjunction with the Roman’s Special Abilities.

At the bottom of this page we have a Faction Summary Chart. It’s interesting to note here that for some of the ‘Special Rules’ it says ‘See The Crescent and the Cross’. Which means in order to understand certain Special Abilities not only do you need the main SAGA rulebook, you also need the ‘Crescent and the Cross’ SAGA expansion book. Humm, interesting, we weren’t warned about that….

Our next two pages deal with the SAGA abilities for the Romans, both basic and advanced. I’m sure SAGA players will be keen to find out what these are but we’re only going to give you a quick glimpse of them here (although you can pause the video for a closer look!).

After the abilities come the ‘Heroes of the Invasions’. These are the special characters for use in your Aetius and Arthur games. The first one for the Romans being Aetius himself – one of the last great Roman generals. There are special rules for all the Heroes, and Heroic units included in the book. For the Romans the heroic unit is Cataphracts.

From the Romans we move on to the Huns.

Amongst their Advanced Abilities they have a very interesting one called ‘encircle them’, which causes a fatigue marker to be placed on every enemy model between two Hun models.

Next up it’s the Goths. Who can actually be either Visigoths or Ostrogoths, with a slightly different faction make-up for both.

It is particularly noted here that many of the Goths abilities are linked to their target’s fatigue. And it’s noted by me (as in this example) that as with a few of the more technical descriptions in Aetius and Arthur the language used leaves something to be desired and the reader is left scratching his head as to what the author is trying to say. I think with Studio Tomahawk publications this often comes from the fact that the book has been translated from French to English, and on a couple of occasions the French text has actually been left in place.

We move from the Goths to the Britons. Like the Romans this new faction requires the use of the new set of ‘ Romans and Britons’ SAGA dice, which are being released at the same time as the book.

The Britons come with two new Special Rules; Galvanized which allows the use of certain Battleboard advanced Abilities and The Companions which generate two attack dice (plus other bonuses) during combat.

One of the Heroes for the Britons is of course Arthur Pendragon, Vortigern may also be used.

The final two new factions in the book are the Saxons – these being what figure manufactures usually refer to as Early Saxons – and the Picts. The latter is allowed War Chariots for their leaders.

After the Factions we have a page on new Equipment which you can bring to bear in your Aetius and Arthur games including ballista and a ‘new’ type of axe called a Francis-ca.

In the ‘Today’s Friends Are Tomorrow’s Enemies’ section we have some rule amendments and additions for using factions from previous SAGA supplements in the Aetius and Arthur setting. For example, The Scotti use the Irish Battleboard from the Raven’s Shadow supplement, with several amendments to the faction’s rules and additional Heroes.

We are then presented with seven new mercenary warbands. Units from these mini-factions can be recruited into your warband at a cost of 1 point at the beginning of the game. Included amongst these fringe barbarian tribes and nations, are ‘Hounds’ which can be formed into a pack and unleashed against your enemies.

The penultimate section of the book presents four new scenarios, Retreat, Battle around the Camp Fire, The Frozen River and Cattle Raid.

And the book concludes with ‘Lee-mess’, described as ‘A campaign system for Aetius and Arthur’ designed for two players. With this system the players can follow a frontier garrison year after year as barbarian follows barbarian raid.’

The campaign is set on the Rhine border a little before the great crossing of 406AD but could be easily transplanted to Wales, Scotland or any other Roman border province. Two campaign sheets, Roman and Barbarian, are included right at the back of the book.

So that’s about it. An initial flip-through of the new Saga Aetius and Arthur supplement. As we’ve come to expect with Studio Tomahawk publications, the production quality is top class and there looks to be plenty in there to push SAGA on (…. or should that be back) for existing players or attract those who have been waiting for the game to move into the early Dark Age period.