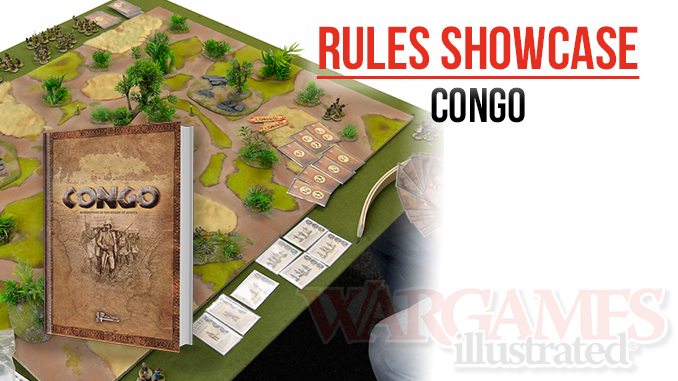 A pdf of this rules show case can be downloaded here.

Our latest set of rules is the new offering from the famous Studio Tomahawk team, taking the player on a journey into the Heart of Darkness…

Congo is an adventure skirmish game set within the classic era of 19th century exploration of the lands beside the Congo River in Africa. Players take on the role of one of the four main factions: Zanzibar Sultanate, White Explorers, Jungle Tribesmen and African Kingdoms. The rulebook includes a number of scenarios that form the basis of your group’s adventures within this forbidding environment. These may be played separately or run together to make a campaign, allowing you to use the same faction over a given number of games. A nice touch is the ‘newspaper’ style of each of the scenarios with all the information you need encapsulated within the style of a suitable periodical of the time, The Bulletin of the Geographical Society. Each scenario has been extensively playtested but there is still plenty of scope for original responses to the parameters of every adventure for all the factions, so no two games using the same scenario will ever be exactly alike.

A Gathering Of Steadfast Heroes

As a skirmish level game, each unit comprises of only three to six figures, although some factions may be a little larger upon occasion. Depending upon the faction chosen, you need to field a maximum of twenty to thirty figures, armed and equipped as dictated by the scenario and keeping within a certain points cost. All of the available units are outlined in the book with plenty of pictorial reference via the full colour Character and Unit Cards provided with the game. These cards contain all the information required to play the game using any of the factions. The cards contain a picture of the character or unit and each one contains a stylized symbol of a bow and arrow, a dagger and a drum. These correspond to Shooting, Melee and Rallying / Terror. Alongside each symbol is a coloured circle inside which is noted a type of dice, ranging from a D6 to a D10. These are the dice which are rolled per member of the unit. The game uses a glorious mechanism called The Holy Rule where any roll of a 5 or more is a success. There are some modifiers to the number of dice rolled due to Stress Tokens but we will look at those later.

At the beginning of each turn, each player draws one Totem card and three Order cards from the deck. Each Order card has a numerical value noted upon it, which corresponds to its Initiative value. Order cards may be viewed prior to the final choice from the relevant hand, which may not have a value higher than seven Initiative points. Totem cards are picked ‘blind’ from the pile. Each turn consists of three phases. Players pick one of their three cards and reveal it simultaneously with their opponent. The card with the highest Initiative value is resolved first and a token is passed to the relevant player. The player then carries out the marked number of actions with his units, so if you have a foot symbol and the number two, two of your units may move, a foot symbol and a bow symbol with the number one alongside each means one unit may move and one may shoot, etc.

The game uses three Measuring Sticks marked S for Short, M for Medium and L for Long in English, corresponding to 4”, 6” and 12” respectively. These sticks are pointed at each end.  During movement, players move a figure from one point to the other for a full move consisting of two Short distances. The caveats to these are a figure cannot move past an enemy model if the measuring stick for the latter part of the movement would come within 3” of that model and that a model may not enter and then leave or leave then enter a defined area of difficult terrain in a single turn. When a unit enters an empty area of difficult or dangerous terrain, the player has to roll either 2D8 or 2D10 depending upon the cover provided by that terrain. The result of that roll is checked against the Dangerous Terrain chart at the back of the book, adding a ‘delightful’ adventure element as anything from poisonous flora to enraged fauna can combine to make life a little more interesting!

The Medium and Long sticks are used to measure the ranges when shooting. Each weapon in the game is given a suitable range from Spears at Medium to Rifles at Long. Obviously, Line of Sight needs to be checked, which can be tough in the jungle! Any Characters with your unit or the use of Totem cards can help to enhance the shooting of the unit, adding extra dice or a modifier. As always, The Holy Rule of 5 applies, with each Success being a hit. The target unit rolls one Cover Dice per hit, the type of the cover dice depending on the terrain they are in, although they can Go To Ground and gain an extra dice. However, you do have to take a Stress Token for doing so. Every roll beyond The Holy Rule removes one hit and the remaining hits result in a casualty for that unit. There is a chance that any Characters with the unit may also become casualties, which is again resolved by the roll of a dice. Otherwise, it is the rank and file who drop to the ground, never to rise again.

Up Close And Personal

Melee or close combat follows a similar process to shooting in the first instance but the success results are then compared to a chart. If both sides get the same number of hits, each unit gets a Stress Token and the defender flees, if one side causes one more hit the losers take a casualty and flee, with both units taking a Stress Token, etc. So, the more hits you inflict on the enemy, the worse it gets for him and the less impact it has upon you with regard to Stress Tokens. Melee is pretty brutal as a consequence and it is worth attacking the enemy with more than one unit if possible, especially if they have a character in the unit. As an aside, it is also quite characterful – in the game we played, Alex decided that a unit of attacking cannibals, having won a round, then paused to consume parts of a fallen bearer, thereby ensuring that the explorer unit were deserving of their fleeing the horrific scene!

Adventure? It’s all Rather Stressful…

During the course of the game, most notably during Shooting and Melee but occasionally as a result of Totem cards or a Dangerous Terrain encounter, a unit will incur Stress Tokens. Each unit can have up to four Stress Tokens at a time. If a unit ends up with more than four tokens, it must either Flee! away from the nearest enemy or take one casualty. If a unit cannot Flee! for whatever reason, it can only take a casualty (but see the Bearers sidebar). A token is taken at random from a bag or similar opaque container and then the effects of that particular token are applied to that unit for as long as it is in play. These can be minuses on your Movement, Shooting or Melee dice but can also be the Mask! which means you cannot engage in Melee combat and are more vulnerable to Terror tests, or the Halt! token which means that the only action possible to that unit is Rally. Terror tests come from Totem cards or as a result of events. To remove Stress tokens, you roll as many die as you have tokens plus any extra die for having a relevant Totem card or a Character figure. Each success removes one token. Terror tokens are removed in the same way. As you can see, Stress and Terror tokens have a major effect upon a unit and the faction being gamed overall, hence the reason that the Totem cards come into use fairly often.

In addition to the three order cards drawn per turn, you also have one Totem card. These cards may be played during the course of a turn in either your own or your opponent’s phase. Each particular Totem animal provides a different opportunity during the game. So, for example, a Lion Totem card adds one Action of any type to your Order card, a Buffalo Totem allows you to remove one Stress token, a Giraffe card adds another S Measuring Stick to a Movement or Shooting dice, etc. Totem cards do NOT have to be used during the course of the turn during which they are drawn, allowing you to build up a series of cards for when you really might need them. However, once played, they are discarded and placed back in the pack for re-use. The Totem cards are a great tool for bringing another element of chance into the game and are a great way to disrupt the plans of your opponent, which is always fun!

Retire To Camp For Tea

Although I have tried to give the facts behind the rules, it is perhaps worth mentioning that I really enjoyed every aspect of the game we played. The actual gameplay was fast and the rules very easy to pick up, with the use of cards adding a whole additional layer of possibility. Another ‘win’ for me was the fact that the game is themed around the concept of not only taking part in a skirmish game but also an adventure, with the use of encounter tables, set objectives, turn limits, a back story, etc. During our game, we tried to play in a suitable style, with even the cannibals charging into contact to the sound of niama, niama (meat, meat), as observed by Henry Stanley during his mission to find Dr. Livingstone. Although one could simply play the game as a battle, the addition of a chosen scenario really helps to create a suitable tale of derring-do, horror and adventure. At the time of writing, it is hoped to offer the whole game as one package, cards, dice, et al, with the possibility of including suitable figures or a complimentary range with unit cards from a well-known manufacturer. All in all, this has the makings of one of those games you can play at home, at the club or at a show or convention quite happily and then play out the same scenario again and again with varied outcomes. I look forward to seeing the final version and will be happily digging out my painted figures and jungle scenery in anticipation.