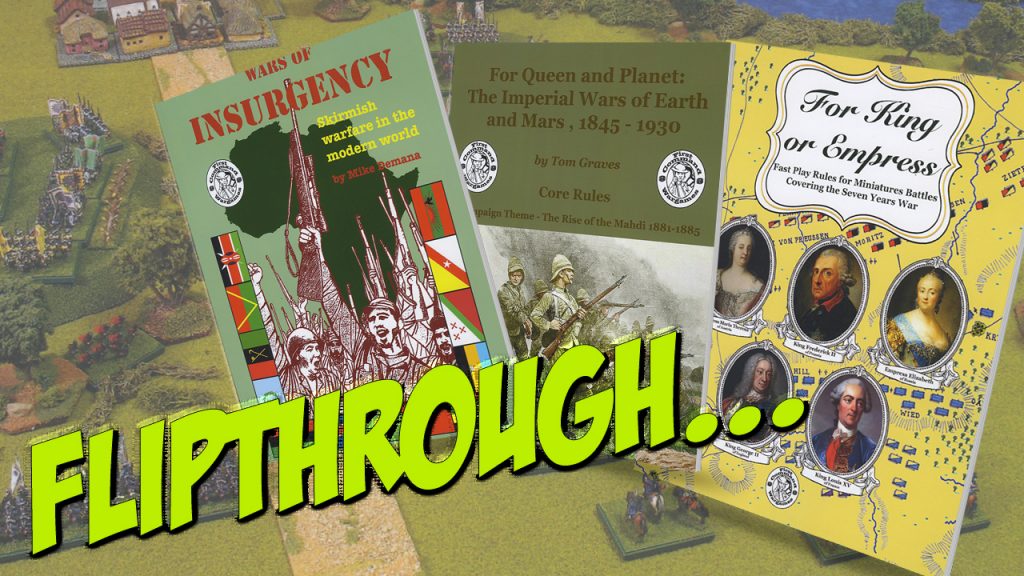 First Command Games is a U.S. based publishing company that provides rules and supplements that cover a whole host of periods. We take a look at just some of the softback books available.

Our first book is For King or Empress, a complete set of fast play rules for designed to represent aspects of the Seven Years War. These are based on a card activation system, which can use index cards or homemade versions. All die roils are made on a D6. Each General has one or two cards and when they are drawn from the pack, they can act with their units. There are a variety of command and movement options. Details are provided for different levels of troops, plus different characteristics for the main forces involved. The book is well laid out and easy to use, always an advantage.

The next set of rules is For Queen and Planet, ostensibly focused upon the Colonial era but with more than a nod to Victorian Sci-fi and the campaign on Mars. However, the main campaign focus is the rise of the Mahdi 1881 – 1885. Throughout the rules, the same turn system applies, with stands being the basing method. Game information includes the main stats and data for the various colonial forces, plus some for potential Martian warfare. Activation is via standard playing cards, there are various movement rates and the use of Fire Factors for shooting. The rules include 9 scenarios related to the rise of the Mahdi, with orders of battle and maps, plus adaptations to use them with a VSF slant. A simple set of rules, with a useful option to actually use two settings with the same ruleset.

The last set of rules is Wars of Insurgency, a set of skirmish level rules for the type of asymmetric warfare in the modern world. This is a 1:1 scale game, with each figure counting, suitable for 15 to 28mm miniatures. Weaponry is more generic than specific but this serves to speed up gameplay. The rules use numbered markers, one per unit for each side, which is placed number down. The commander with initiative moves and attacks with his unit marked with a 1, then the opposing player moves his 1 and so on, alternating until all units have acted. There are detailed rules for terrain types, but no formation restrictions on figures, although they all move at the same rate. Combat is via Attack and Defence dice, which are calculated by the class, weapon type and number of figures. The simplicity of calculating results is a main feature, with rolls of a 4-6 being successful. Included in the book is a nice campaign system, which charts the progress of a range of factions, and a points system to balance games out. There are also three scenarios that can be used, plus rules for adapting historical actions into the game. Simple gameplay, with plenty of nuance and the chance to run a campaign using imagi-nations or history in equal measure – very nice.

These are only three of the available rulebooks from this busy publishing house, who also have supplements and scenario books for other commercially available rules. They can be purchased as PDFs or print copies via Lulu. One criticism is the lack of colour, especially in the photographs of miniatures, but this is a small niggle and each book has some suitable artwork included which mitigates this. The simplicity of play and clear layout of the information, plus the use of suitable examples, is of a standard often found in other, more expensive publications. If you’re looking for a good set of rules that won’t tax your pocket or cause confusion, then check the website out.