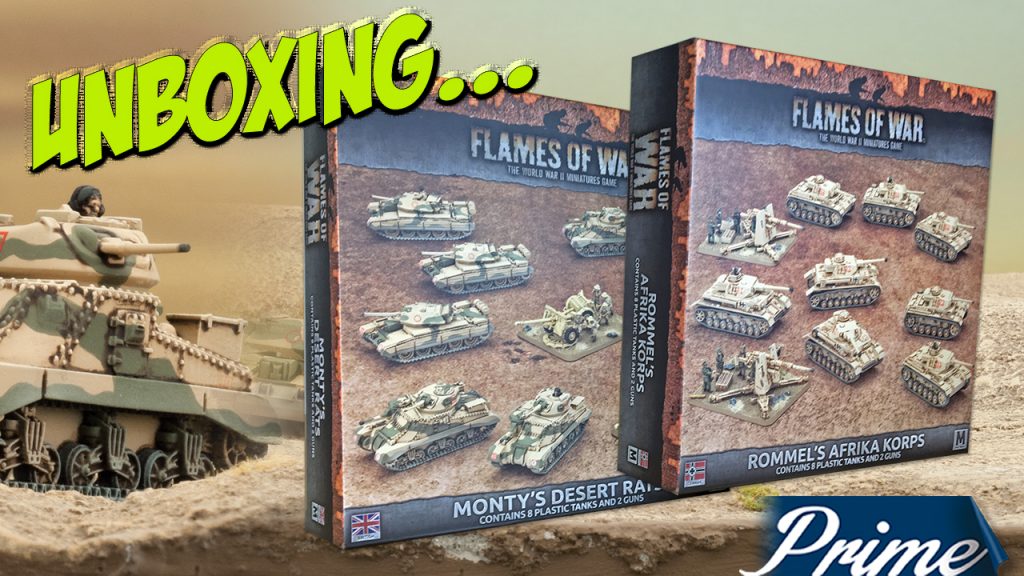 We unbox two forthcoming miniature sets for Flames of War.

In amongst all the coverage of the Flames Of War Version 4 rules, you may have missed the two new boxed sets of miniatures designed for the Mid-War period in the desert. So, in the interests of completeness, we’ve decided to take a look inside each box. First, we’ll start with the Rommel’s Afrika Korps set, and then move on to Monty’s Desert Rats. Both sets come with a selection of new plastic models and ‘extras’ that will help you get into action straight away.

The Rommel’s Afrika Korps set contains five sprues with enough plastic parts to build five Panzer III tanks. These kits come with the option of fielding the Panzer IIIs with the short or long barreled versions of the 50mm main gun, plus the 75mm short-barreled variant. The commander’s cupola may be modeled open or closed, allowing for the placing of one of the resin tank commander’s if desired.

There are also enough sprues to build three Panzer IV’s with the option to use the short or long 75mm gun barrel. The option to have the main turret hatch open allows for the inclusion of a suitable command figure. Again, this is an easy to assemble kit

Lastly, there are two 8.8cm Heavy AA guns in the set. The dreaded ‘88’, this is the weapon that worked at its best in the desert war, with anyone foolish enough to get into range asking for trouble. The large artillery bases in the kit allow for easy assembly and there are plastic crew figures for both weapons.

Turing to the Monty’s Desert Rats set, there are five sprues, allowing you to build either five M3 Lee (American) or five Grant (British and Commonwealth) tanks in total. With it’s bow sponson mounted 75mm and the 37mm in the turret, this tank helped the British and Commonwealth forces to take on the Axis in the desert. The optional turrets and weapons that allow you to field more than one version of the tank, always a good thing. The Grant’s side skirts are here, as is the command cupola with MG. The hatch can be shown open or closed and there are resin commander sprues included in the box.

The three Crusader sprues have both the Mark II and III turrets, allow you to field either the 2 or 6-pounder main gun respectively. The commander’s hatch on each version is slightly different and can be shown open or closed, with the option to use a command figure. There is also the option to add the hull mounted MG to the earlier version.

For support, there are two artillery pieces that can be built as either 17/25 or 25 pounder guns. They come complete with crew figures and a base, allowing you to create a nice piece for gaming use. You may also field a howitzer version of the gun, adding another option to your games.

As well as all that armoured and anti-tank might, both sets come with a complete 120 page Flames Of War Rulebook, plus Unit Cards for in-game usage and decal sheets to complete your model making experience.

As always with Battlefront, these boxed sets offer good value for money and help you to create a small force for your chosen side or perhaps the core of what could become a much larger army. As an introduction to the new rules, these are exactly what you need to get playing your first few games. The high quality and option available with the kits is enough to satisfy the majority of model makers at this scale and all the extras devoted to the game play are well thought out.