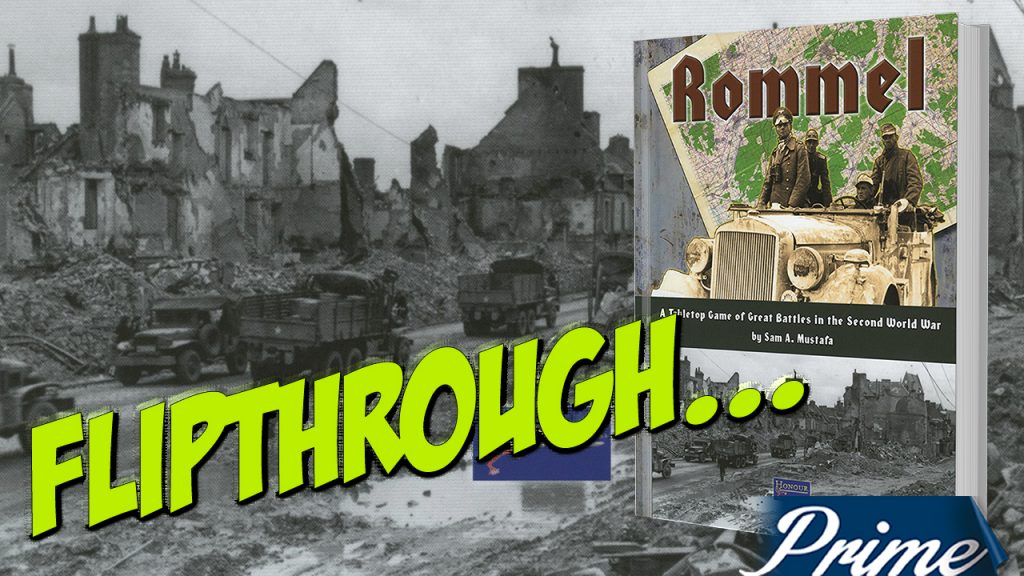 Sam Mustafa is well known for producing the popular rulesets Blucher, Longstreet and Maurice as part of his Honour series. Sam aims to produce fun and challenging wargames while respecting the tactics and history of the periods. The latest of these rulesets is Rommel, covering the European and Mediterranean theatres of World War Two.

This is a hardback book, with high quality paper with a pleasing satin finish. Beginning with a brief discussion of the Desert Fox himself, the book then introduces the player to the game concepts. These include the unit cards, the game turn, table set up, terrain and zones of control.

Chapter two deal with units and markers and explains what the units on the table represent in real life. Being a game based around unit cards the rest of the chapter leads the player through the various symbols on the cards. It ends with a description of the markers that the game uses. Chapter three covers all the basic concepts and phases of play that make up a full game

Supply is an important part of Rommel and players should read the chapter regarding this with care! As it should be in a game encompassing motorised combat the movement phase is extensive and well covered. The combat rules are equally extensive covering artillery, tank battles and air strikes. As you can see there is a very helpful combat example provided to help you understand the system.

Someone will lose a combat (or you will have a very long game) and therefore retreat will be in order. This can lead to the destruction of a unit if they cannot legally retreat! The final part of the basic game is Reorganisation and Objectives. Reorganisation allows you to mitigate your losses under certain circumstances. Objectives are usually the targets for the scenarios and are either static or trophies. Trophies disappear once captured and static, as the name implies, remain on table all game.

Once you have mastered the basic game you will want to start introducing some of the extra complexity that Rommel encompasses. This is the Advanced Game: a large chapter covering all those aspects of warfare missing from the basic game. It is here that reinforcements are introduced, guidelines for running “club games” which are multiplayer games and environment rules.

Open Architecture is the term Sam Mustafa has used for describing how the game builds its armies. It means you have full view of the maths behind the various points and so you can build your own units. Alongside this there are unit and army lists provided for American, British, French, German, Italian and Soviet Armies to allow you to get started quicker.

The last chapter contains a number of scenarios which allow you to get started fighting amongst yourselves as soon as possible. Finally there are six appendices including FAQs, guidance on creating historic scenarios, quick reference sheet and a useful index.

This well produced and surprisingly large book contains all you need to play a game of Rommel once you add a table and some figures. You do not even need the figures if you use cards and these cards can be produced using the DIY card file that is kindly provided from the Honour website. You can also find the introductory Operation Brevity scenario referenced in the rules along with an advanced scenario refighting the Assault on Juno Beach.

Being largely scale independent means the game can be played in almost any scale you like. You will need to increase the size of the squares and playing area if you want to use anything above 15mm. At the same time if you drop the scale down you will gain an impressive looking table that could encompass one of the larger set pieces of World War Two, El Alamein anyone?