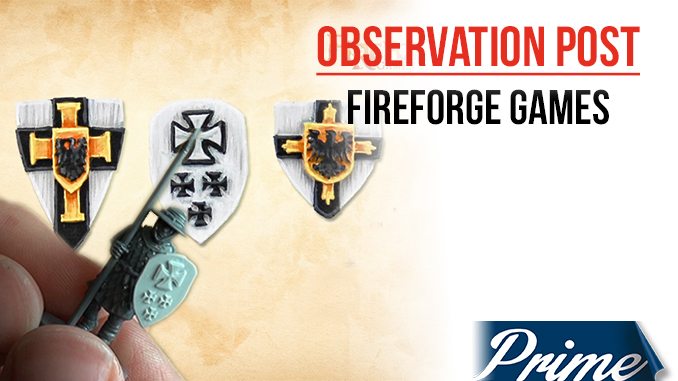 Fireforge Games produce some characterful plastic knights, with both foot and mounted sets for Templar and Teutonic themed forces. They’ve now added some resin shields for some of the different Orders to enable gamers to directly link their troops to a particular faction.

The different shields and the related factions may need some introduction. Each pack of shields consist of 12 resin pieces with the central device for that Order appearing as a raised relief. All the shields are designed to fit onto the chosen arm of a suitably assembled miniature, using superglue or similar.

The shields we actually have in the office are Hospitalier Order Shields 1 and Teutonic Shields.

There are two packs of Hospitalier Order shields. The Hospitalier Order went from a monastic order who helped the sick to a military order of the Roman Catholic faith which took part in the various Crusades. The cross on their shields is in the Maltese style, with Malta being the home of the Order for many years.

The Teutonic Shields pack consist of shields with the more Germanic version of the cross and the eagle of the German Empire, which links to its roots as an order created in the medieval Germanic lands. Founded as a military Order, the knights nevertheless had a Roman Catholic Christian mission, creating hospitals where needed and with a motto of ‘Help, Defend, Heal”. They conquered large parts of Europe, as well as taking part in the Crusades.

Other shield packs available include:

The Santiago Order, with the cross of Saint James of Spain as the main device on the shield. Initially founded to defend pilgrims travelling on the St. James’ Way, they also helped to defend Christendom and to remove the Muslim Moors from the Iberian Peninsula of Spain.

The Alcantara / Calatrava Order have one pack of shields. They also fought the Moorish Muslims on the Iberian Peninsula and used the a Greek cross (also know as the Cross of St. Julien) as their device, in either green or red respectively.

Lastly, the Order of Jerusalem, also known as the Knights of the Holy Sepulchre, have one pack of shields, with the cross of St. Godfrey of Boullion, their founder, as their device. The initial role of the order was to protect pilgrims on their way to Jerusalem but they then went on to be a part of the Crusades.

These shields are a great way to theme your knights and men at arms within your Medieval armies. Just by attaching a shield, you begin to create a story for your force or, at the very least, enable rapid identification of your troops on the tabletop. Even better, by using raised devices or symbols on the shields, on can merely add paint rather than trying to use shield transfers.