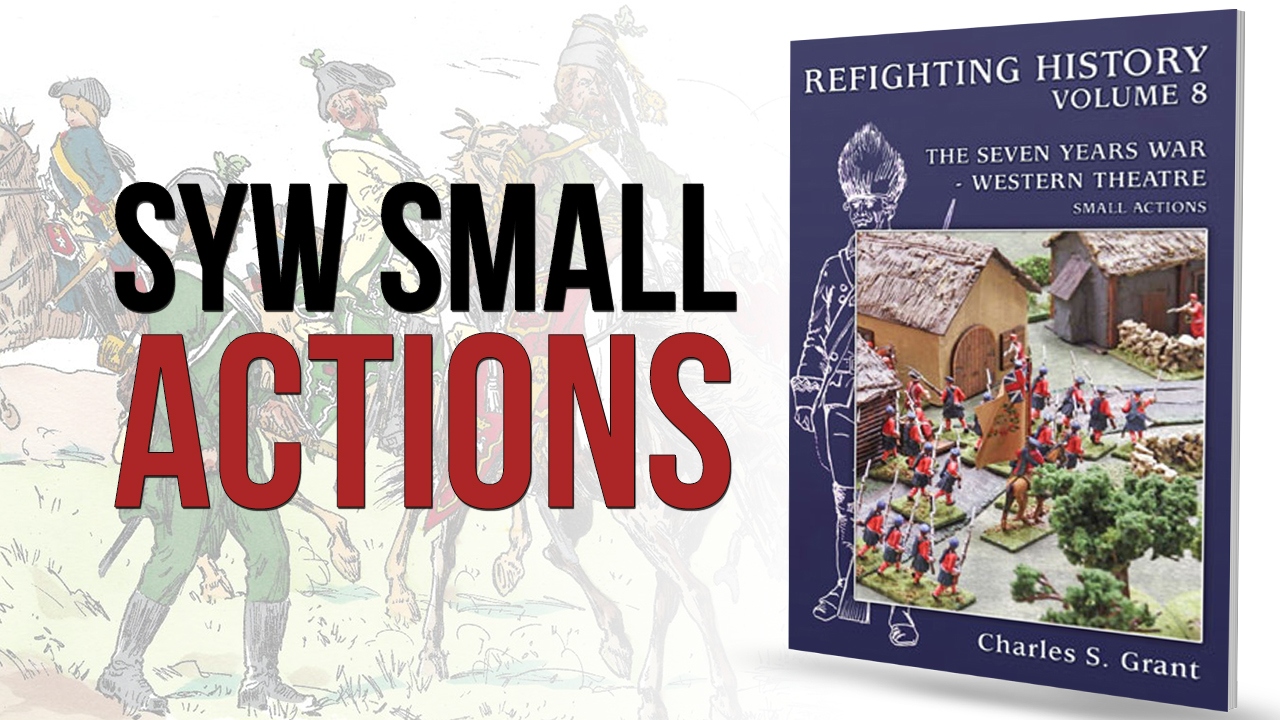 Having covered the larger battles of the Seven Years War in Europe in previous volumes, Charles S Grant turns to small actions of the war for this latest volume in the “Refighting History” series. This A4 size hard back book runs to 192 pages and is full of colour pictures of the authors Seven Years War miniatures in action.

Below is a transcript for those who prefer to read rather than watch.

As well as full colour maps, there are also colour prints depicting some of the units who took part in the various battles and skirmishes covered in this volume.

The author begins by talking about his miniatures collection, how he went about basing and organising it and includes colour pictures of the units as well. This did make me smile, as not many people I know are playing games with 40 figure infantry battalions, as the author is, especially not for skirmish games but each to their own I suppose! The scenarios covered in the book are generic, and can be used for any rules system, although rules such as “Sharpe Practice’ are mentioned as being ideal for this scale of game.

The next chapter covers some optional rules that gamers might like to add to their existing rules to help get the feel for smaller actions, such as the need to escort prisoners or the possibility of wagon drivers “hot footing” it as soon as the enemy turn up.

There then follow nine wargames scenarios based around historical actions that occurred in Germany during 1760. Each scenario begins with the historical background, which I found very interesting in most cases, before moving on to outline how the wargame could be played. Special rules are provided to help recreate the situation that the opposing commanders found themselves in as well as a break down of the forces involved and how they translate into wargames units. Each scenario is well presented, is clear and easy to follow which is helped by the inclusion of colour maps of the wargames table set up. Full colour photos of the game in progress sit alongside the text, making this an easy book to read.

Writing balanced small-scale scenarios is a tricky business to get right and I am not convinced about some of the scenarios included here. The first scenario, for example, involves some sleeping French Dragoon’s who have to wake up and escape before a larger British force moves into the town and takes them prisoner. Tactical options are limited and with the chance of your troops “waking up” down to a random roll, the French player is more reliant on luck than skill to escape. That said, there are plenty of medium sized skirmishes in this book with balanced forces on both sides, and there is nothing stopping you amending the wargames forces you use for each scenario to better suit your collection or taste.

Overall, a very nice book that any fan of the Seven Years War will find interesting – offering them more games at this lower tactical level.