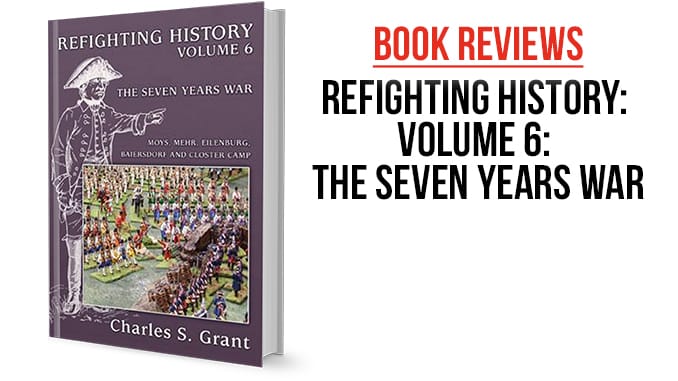 This impressive book is the sixth installment in Charles S. Grant’s series of books educating miniature wargamers on specific battles as well as a wealth of artwork and other information for the period. In the 167 pages of this book readers can find information on the Battles of Moys, Mehr, Eilenburg, Baiersdorf, and Closter Camp from the campaigns during the Seven Years War. Throughout these pages are amazing color photos that portray important figures in these battles, troops, or just photos of miniatures on the tabletop. Furthermore Mr. Grant formulated additional rules for command groups in the period of the Seven Years War, along with updates to the ruleset The War Game Rules which are also written by Charles S. Grant. As someone who has never read any of Charles S. Grant’s books of Refighting History, this book is of incredibly high quality and should be considered essential for wargamers who wish to recreate battles of the early 18th Century. As someone who is starting to get into larger battles in the 18th to 19th Centuries, these books can provide players with a guideline to a battle without having to do independent research yourself. Also, Grant recommends if you use these rules to play with 15mm models and explains ways to base them in order to make recreating these battles as effectively as possible. So while not every wargamer would be drawn to this scale, the information and artwork provided within less than 200 pages is nothing less than astounding. Just make sure if you start this period, make sure to buy and read through volume 1 first, along with The War Game Rules.