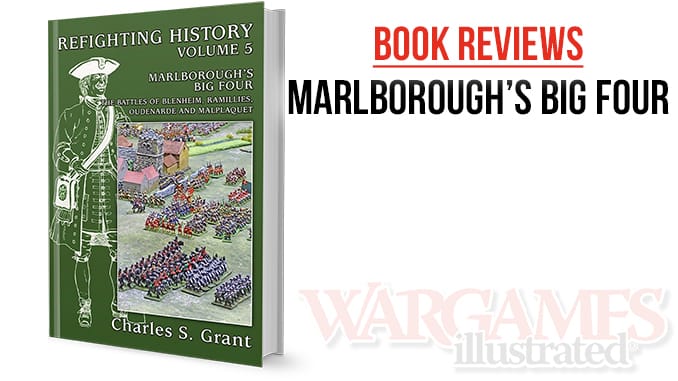 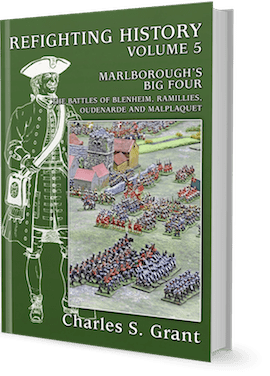 Marlborough’s Big Four (for brevity) by Charles S. Grant is published by Partizan Press, has 184 pages and a wealth of illustrations, photos and maps. This is the latest book in the Fighting History series and like the rest it does exactly what it says on the tin. The author Charles S. Grant is well known in the wargaming community and his (and his family’s) interest in the C18th is equally well known and this book is the culmination of his lifetime’s study of the War of Spanish Succession.

The book covers Blenheim 1704, Ramilles 1706, Malplaquet 1708 and Oudenaarde 1709, the four battles that have cemented Marlborough’s reputation as one of the great commanders. It says much for the pace of warfare in the early C18th that four battles in six years was not thought laggardly.   The author doesn’t cover the campaigns or build up to the battles, explaining that these are well covered elsewhere, which is hard to argue with. What he does do is set out the orders of battles and the terrain, explaining what is needed to refight these battles. Grant then describes what happened historically in each of the battles before refighting it with friends, some of whom were not familiar with the battle beforehand so are fighting the situation as much as refighting the battles. This is one of the issues with refighting battles, how far do you commit the players to the historical deployment and so on. Grant discusses this and sets out his reasons for playing the games the way he did.

The orders of battle are comprehensive including the actual numbers in each unit so converting these to any rule set or unit size would be straightforward. Grant used 15mm figures for his games but does say in the wrapup that he prefers the look of 28mm figures in big units. Whichever are used this book will give the reader all the information they need to fight one or all of the battles.

There are plenty of photos of the battles, both of the entire field and closeups of particular actions. I liked the way the former were screened in so there are no bookshelves, coffee cups or Megadeth t-shirts visible to distract from the action. All in all the illustrations are excellent combining contemporary illustrations with modern maps and uniform plates, with a few vignettes of 28mm figures for colour and detail.

This is a homely book, with clubby reminiscences of borrowed figures and old friends lost and I suspect the book is aimed at those of us who grew up on the books of the author’s father.

The one, very minor, complaint is that Winston Churchill is extensively quoted and he is hardly an impartial observer of his ancestor. The book does rely heavily on older sources about Marlborough’s battles so perhaps that can be forgiven, though several modern works get a mention.

All in all this is a very useful guide to fighting the battles but it gives no help for those studying the campaigns or the war.