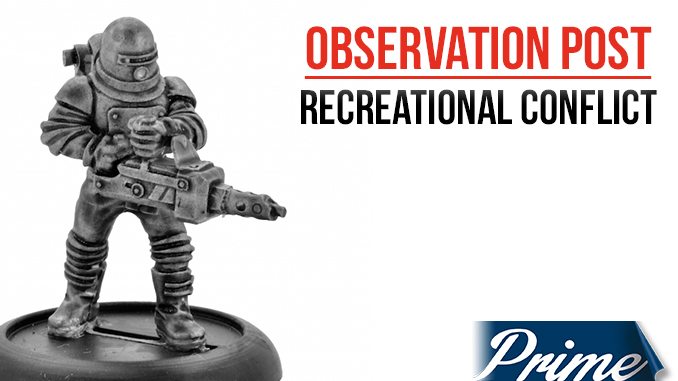 In addition to stocking a number of products from UK and US companies, this company has its own line of miniatures known as Lead Bones. This is a fairly eclectic range, encompassing science fiction, modern and horror tropes.

The first pack is four 15mm Hardsuits that could double as small combat robots or power armoured troops at larger figure sizes. Inspired by the world of video games, these are nicely done, with a fair amount of detail.

The next pack is entitled Clerks Set. You have four 28mm civilian miniatures here, suitable for use in both UK and US stores, perhaps a small corner shop or convenience store. In aprons and long coats, there are obvious shopkeepers and workers, although the single female figure appears to be dressed as a District Nurse found in the UK.

Next up we’re back to the more warlike, with a 28mm sized version of the earlier Hardsuits, complete with hand and weapon options. This would make a great VSF-style power armoured suit.

There are two single packs of figures labeled EVO Trooper, one described as having a plasma drill and the other an Asteroid Miner with a pick. Again, there’s a touch of the Victorian with the miniature’s spacesuits, although they would work in a variety of different settings.

The last pack is Biohazard III, a set of six miniatures in standard Hazmat suits, armed with either pistols, M16’s and a flamethrower, plus one figure using a Geiger counter.