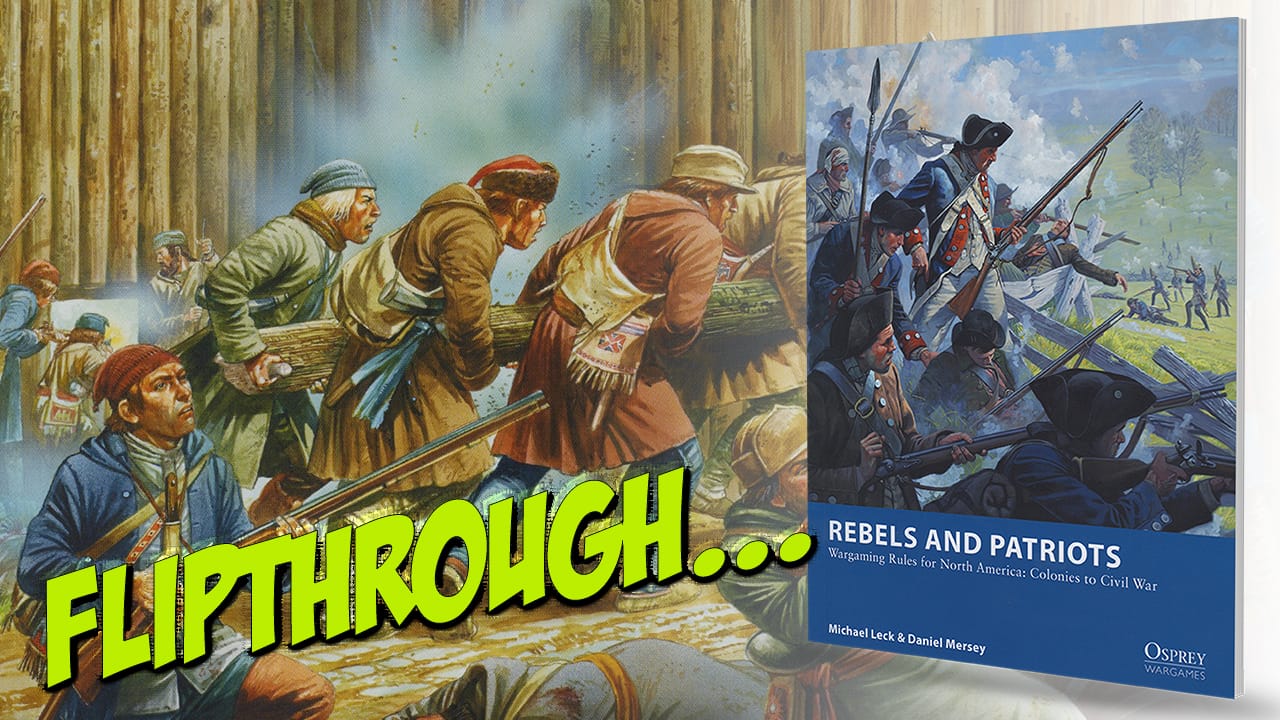 The Rebels and Patriots rules are contained within the standard Osprey Games ‘blue book’ softback, consisting of 64 pages. This is billed as the last of the rule sets based upon the ever popular Lion Rampant. It contains not only rules to game a host of conflicts from the North American Continent, but also sample Companies and 12 scenarios to add an element of campaign play.

The rules follow a similar format to those from the other versions in the ‘Rampant’ series. The wars covered include the French and Indian War, American War of Independence, War of 1812, Texas Revolution, Mexican-American War, the American Civil War and slightly beyond, with options to create forces for the Fenian Raids into Canada and the What If? of foreign intervention in the ACW.

The main focus of the rules is akin to a more detailed version of the Officer rules from PIkeman’s Lament, the ECW and Thirty Years War book in the Rampant series.

When mustering your Company of between 40 and 60 figures, the Officer in command represents you as a character. Placed within a unit of his company, the Officer gains or loses Honour during the course of a game, charting the progress of one leader as he moves up through the ranks.

When creating an Officer character, a number of dice are rolled to determine starting rank, the officer’s background and overriding character traits and even what happens during a battle if they are injured. Officers provide bonuses to the unit they are with and to the company as a whole, but can also prove to be detrimental to the Company if they are not of a suitable ‘type’.

Having created your Officer, the rules move to focus upon your Company. A sample ’24-point’ force for the American Civil War is outlined, followed by a number of generic unit options to pick from. Each unit has a points value and optional upgrades which also cost points. Any points value may be accommodated, but 24 points is the chosen starting place for those new to the rules.

There is some effort in each description to suggest which conflicts some of the units would work best within, but some historical research is suggested.

On average, a Company should consist of between 4 and 7 units, with perhaps a single artillery piece. Cavalry may be mixed in as desired, but the rules caution against using too much, and underline the preponderance of men fighting dismounted rather than in ‘massed’ charges.

The rules section begins with the main conventions and offers the ‘new’ activation rules.

Rather than using a totally new activation system, the approach taken is based upon those seen in Dan Mersey’s The Men Who Would Be Kings Colonial rules: each unit in a company must still roll to activate, but a failure to do so means a player moves onto the next available unit, rather than losing his whole turn – which is the case in Lion Rampant. As already discovered by Colonial gamers, this makes for a very different feel to games, and takes into account the differences between Medieval-era combat and 19th Century actions.

There are modifiers for Disorder Markers and Discipline, and a final target number to be exceeded on two six sided die. Once activated, a Unit’s choice of actions is declared and then undertaken. Units may Move, Attack and Fire, etc., with target units perhaps responding with a Counter Charge or by Evading if the ability is noted in their options, and then both sides removing casualties as required. Morale and Disorder results are evident after all losses have been calculated.

The Scenarios section discusses how to set up a game, whether one player versus another, or a multiplayer action, and outlines all the usual needs for each of the 12 scenarios, although table set-up maps are absent.

The final section consists of a number of sample 24-point forces covering the whole gamut of North American history. These are ‘benchmark’ army lists but are not intended as definitive. The game works upon adapting what you have and fielding a force of your choice, not being prescriptive. Lastly, there are blank Officer and Company roster sheets which may be photocopied for recording the career of your company.