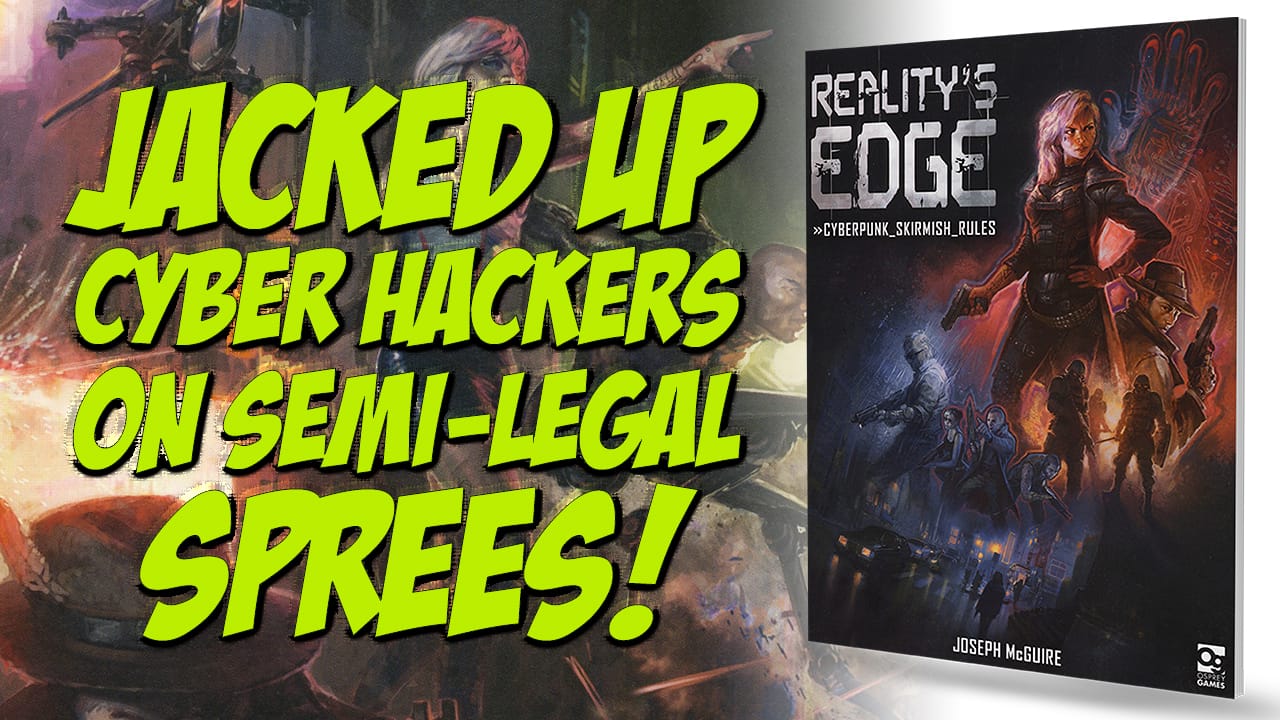 Osprey Games have released the latest in their new range of hardback rules systems, this time focussed upon skirmish level rules for adventures during the classic Cyberpunk setting, complete with mega corporations, dystopian themes and combat from street to hyper reality level. This is a roughly US Letter format rulebook, which has a whopping 320-pages within its hardback covers.

When a rulebook has a 6-page content list, some gamers may be instantly put off. However, as the author explains on page 10 and 11, this is not a book to be read and digested all in one sitting. Rather, it is a resource which tries to offer rules, background and explanation regarding pretty much every conceivable aspect of the game. Once you are past page 11, you encounter the first of the background examples, an overview of the game universe which underpins the whole ethos of the game. This is a dark future, not that far away from now, where power is held by mega corporations who vie against each other for resources, sales and money.   By the time you get to page 21, you’ll be pretty much conversant with where your choice of in-game characters belong.

The rules really start on page 23, which cover the types of models which may be used, the importance of facing, maximum board size and the use of D10 dice for Opposed and Stat tests. Each figure is an individual member of a team, and has a statline which has a numerical value, which is added to the roll of a D10. The first part of the Turn Sequence is explored, the Activation of the figures each player is using, and the use of Action Points or AP’s to carry out a number of actions, all of which have a certain cost. Although intended for use with two players, there is some advice on how to run games with more, before we get to the realms of the different actions available, their AP point cost and a full explanation of the limits or otherwise of the action.

Having grasped the rules for activation and the use of Apps, the rules move fairly rapidly through the basics of Movement, Ranged and Melee Combat, plus the effects of the latter two on the morale of the characters. Like everything so far, the overall layout of the book is very clear, and there are some good textual examples for the main aspects. I would have personally preferred if there had been some diagrams as well, just to aid the level of explanation. Having said that, the explanations of the rules are done very well. The whole ‘battle and results’ system comes together as a relatively easy read, with some potential for nuancing like firing through walls, suppressive fire and knowing when to quit!

Having established how to function in the real world, the so-called ‘Meatzone’, the next step is to define and explain the world of the ‘Hypernet’. Most characters in the game have a presence in the virtual reality world of computers, and some missions involve hacking into computer systems using your own built-in technology or apps (yes, really!). Those who carry out hacking activities have another character or ‘avatar’ which represents them within the realms of cyber reality, which allows them to carry out actions within this realm. Again, the relevant rules are explained in suitable detail. Another fairly unique aspect to the world of ‘classic’ Cyberpunk is the world around the characters: there is a cast of Non-Player Characters within both real and cyberspace that can be encountered, and these have rules to bring them to ‘life’ within the game, whether they are opposing corporate security guards or simply bystanders.

Creating your team of operatives and equipping them is the focus for much of the rest of the book, complete with 10 mission scenarios which are outlined in full. Each character in the game is just that, chosen from a host of types, then streamlined through the use of die rolls, points choices and more. Your leader, a Showrunner, spends his or her Crypto Currency to hire and equip a ‘crew’ to help them on their missions. A roster sheet records the stats, skills, weapons, equipment and cyber upgrades for each member of the crew. You then undertake one of the mission scenarios provided and see what happens.

Also included in the rules is the pretty much inevitable Campaign System, complete with Hitches which can be applied to missions to complicate them, a set-up system for a campaign crew, the effects of injuries and rules on how to run, advance and how to end a campaign. A nice touch is the inclusion of a number of sample NPC characters that can be encountered during a campaign, plus a suitable roster sheet which may be photocopied to cover each member of your crew.

In some ways, 320-pages of rules is a lot to absorb. I’m a fan of cyberpunk and dystopian tales, but it was a challenge for me to get through it all! However, once you have grasped the basic rules for each element, and put a Crew together, the actual gameplay parts of the book are simple to follow, well written and have a layout which aids discovery. Plus, that 6-page contents list really helps! The artwork used in the book is wonderfully evocative of the subject matter, and adds to the atmosphere. Missed opportunities include the lack of diagrams for some examples and the fact the cyberpunk milieu may not appeal to a wide range of gamers. Also absent are any photographs of miniatures – but I, for one, actually like that, as too often rulebooks can be ruined by the use of poorly constructed photographs using badly painted miniatures (which is why you’ll never see my efforts in a rulebook!). If cyberpunk is your thing or appeals, then this is a good book to pick up, a set of miniature skirmish rules which partially strays into the realms of roleplaying, in much the same way as Frostgrave does for the fantasy genre. Now, gear up, jack in and start that run!