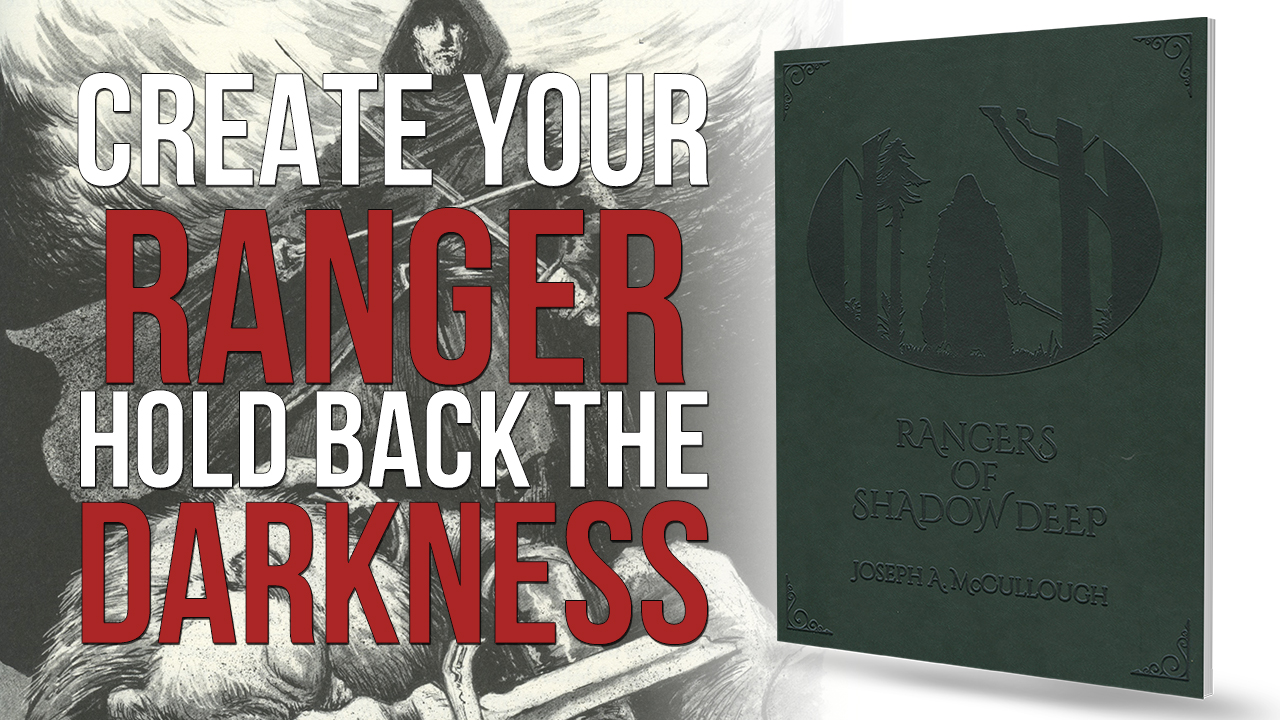 Rangers of Shadow Deep is a solo or co-operative play tabletop miniatures game.  Players create a Ranger character and use it as part of a team to uncover secrets in a land beset by enemies. We are going to be taking a look at the ‘deluxe’ version, a 136-page hardback book with leather effect and embossed covers, plus top-quality matte pages, published by Modiphius Entertainment.

Let’s begin by pointing out just how high quality this book is. Get the deluxe version if you can. Now, the contents, Players take on the role of elite Rangers, part warrior, part wizard, who operate within the Shadow Deep, a realm of darkness where the Rangers stand as the servants of Light. After a brief introduction, the rules describe what is needed to play and then moves straight into creating your ‘player character’, using a system of Build Points to create basic stats, add Heroic Abilities, magic Spells and Skills, using the list and descriptions provided.

Having created a Ranger, Recruitment Points are used to create a band of supporters, adding weapons, armour and equipment to each non-player characters or ‘companions’. Both mundane and magical equipment is listed and described, before moving onto the basic rules. Players take on one of three missions, outlined later in the rules, and set up the table as described. A turn is defined as having four basic phases, Ranger, Creature, Companion and Event. This gives us Rangers and a possibility of some Companions activating, followed by the encountered Creatures, the rest of the Companions and then resolving the Event as directed by the scenario.

Each part of the rules is described simply and succinctly, with ease of reading and reference. Skill and Stat rolls are made as required, as shown by examples of play, including the use of modifiers.

Rules for the results of various states and casting spells are simple to resolve but effective, again using some useful examples and a basic ‘Ai’ system for the response of the usually Evil Creatures to encountering the Ranger and his Band. Rules for the player Rangers to NPC Companions are reiterated, with sample stat lines for the various ones who may be recruited. These are fairly ‘archetypal’, and numbers that may be recruited are based upon the number of Ranger players taking part.

The next section deals with the main aim of the game, to ‘go adventuring’ and see your Ranger and Companions grow in prowess and ability, taking part in various mission scenarios against creatures controlled by the simple AI and the use of playing cards.

The Missions are explored, with each one being a series of scenarios which must be completed in order as defined by the players or the mission itself. Clues are gathered, secrets exposed, creatures vanquished, and the party progresses.

The latter part of the book contains a detailed bestiary for a series of evil beings of various levels of power, then another campaign of missions designed for Rangers who have progressed to level 5 and above. Again, the player characters take on the card- and reaction-based AI system to progress through each scenario, striving to overcome all enemies and find a way to hold back the final Darkness.

The blend of miniatures and roleplaying game here is just perfect. The AI / card system for the ‘baddies’ is simple to deal with and every aspect if very cleanly presented in a ‘gamer friendly’ style. The book itself is very well done, and is a ‘deluxe’ version par excellence. I would have liked to see some colour artwork or photographs of miniatures, but that’s just my visual sense coming in. As it is, the excellent range of miniatures from North Star to support this set of rules really has the potential to enhance the look of any game. Come Rangers, let’s go down to the woods once more as a Fellowship and go adventuring…