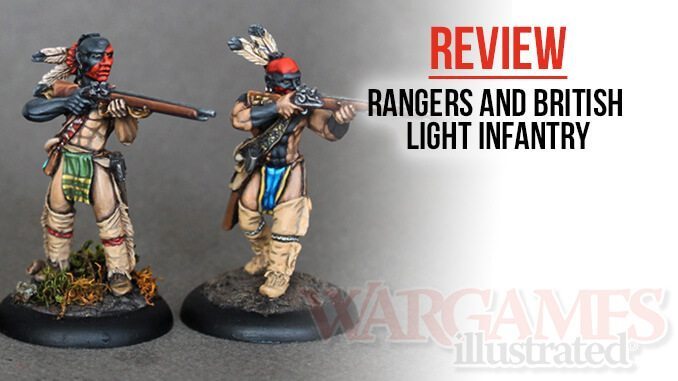 Over the last year Miniature Service Center (MSC) of California has been releasing figures for the French and Indian War in 40mm scale. A useful and visually attractive scale for this period, the models offer much appeal for the skirmish style fighting and small frontier actions so reminiscent of this fascinating time. Past releases have included both French infantry and Woodland Indians, full of personality and dynamic pose that will inspire both gamers and collectors alike. Recently released is an excellent selection of Light Infantry and Ranger types designed for combat on the American frontier. There are currently fourteen light infantry and seven rangers’ poses, with more rangers promised. The figures come with separate heads, the rangers coming with berets and round hats, while the light infantry have the leather cap in two variations, one with ear flaps down.

The photos show the type of poses available in both groups; these models are here to fight, with varieties of firing, loading and advancing men. Particularly nice is SYWB 59, who is lunging forward with fixed bayonet, fixing to come to terms with an adversary. Special personality models are also offered with figures of Major Robert Rogers, Daniel Boone, Major General Wolfe and a three-figure set of two Jesuit priests with an Indian guide. Boone is depicted with the famous coonskin cap and Rogers is modeled per a famous painting with cradled musket, his leather cap adorned with a plume. The larger size of the models offers great detail and very satisfying painting opportunities. These are not just gaming pieces for the table but stand alone miniature statues. Promised this summer are more Indians with head variations for the six different tribes of the Iroquois League, to be followed by British regulars, grenadiers, and highlanders. They are worth a look, folks. MSC offers discounts for large orders and unit packs, and choices of heads are available for most ranges.

PROS: The head variations are very useful for both the light infantry and rangers, allowing mixing of head gear giving your forces that in-the-field look that further personalizes your units. It also allows for creation of major historical units like Rogers Rangers and Gage’s 80th Light Infantry, as well as other regular British and provincial colonial light units. While buying metal models from across the pond may seem cost prohibitive, there are already many customers in Europe for Miniatures Service Center. The individual price of a 40mm figure is $3.50, which is not that much more than many 28mm figures. Discounts are offered for larger orders and unit packs. Doug the proprietor is joy to work with and accommodating to your needs.

CONS: These figures are larger than Sash and Saber, the other 40mm range in the United States, making them difficult to work with one another. I’m not sure how they size up to Front Rank’s 40mm range.

SCOPE: MSC plans to expand the range to game the Seven Years War in Europe as well. There are already enough Prussians in the American Revolution range to field significant infantry formations for that conflict. There are currently enough figures available to field any un-uniformed formations in the American frontier from 1750-1830. Anyone up for gaming the movie Revenant?