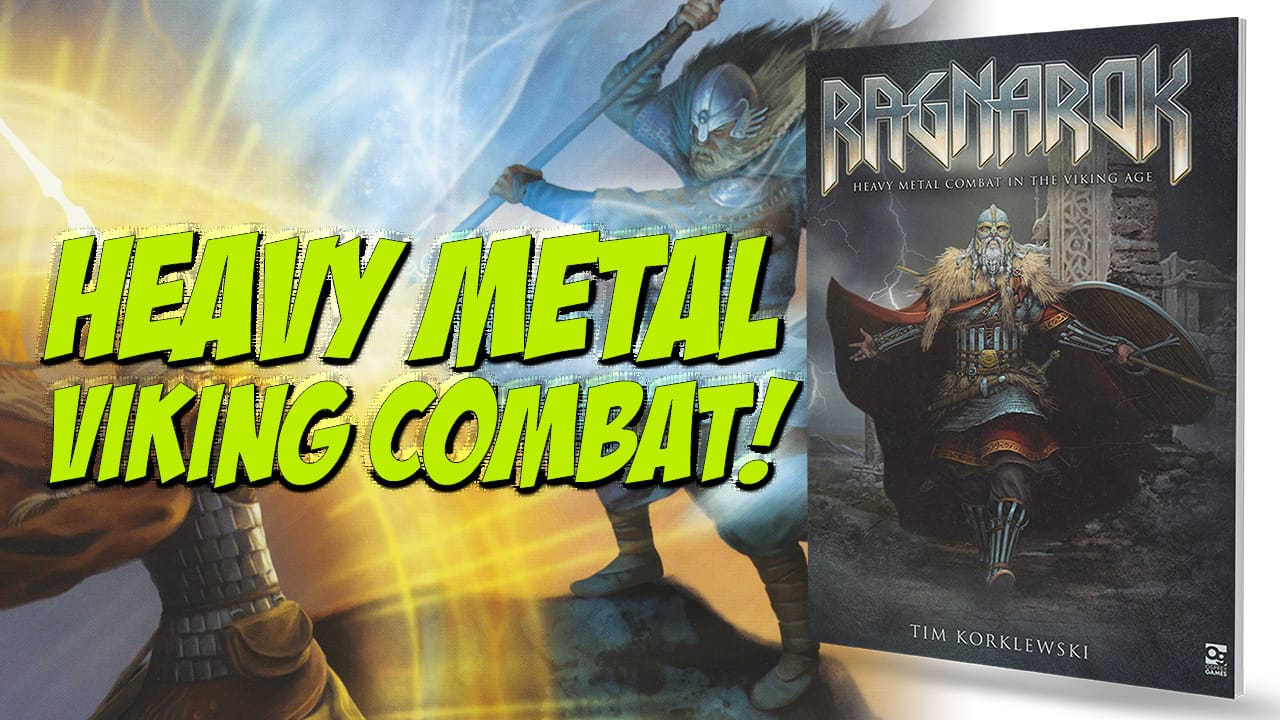 Osprey Games’ latest game is Ragnarok, which plunges players into a universe of Heavy Metal Combat In The Viking Age. This 208-page, hardback book provides rules to run a War Clan in a Viking era ‘End Times’, with the quest for godhood being the ultimate goal. This is also the first game to use the Morpheus Engine, created by the author to enable gaming across this and many other genres.

The book begins with an introduction to the basics needed to play and serves as a good entry point for those new to gaming.  This is followed by an explanation of the world behind the game setting, and the various realms, which are themselves based upon Norse mythology and beliefs.

The core of the Morpheus Engine is then outlined, in terms of the model profiles and rules. A central part of the overall ‘look’ of the book itself is the artwork by Spanish artist Ru-Mor, truly evocative of the setting. The basics of the rules are expanded with scenario set-ups, how a game round works and the importance of the use of the difference between opposed rolls  on the Success Table, the use of Action points and the usual rules for Movement, Melee and Ranged attacks, all clearly laid out and explained. Interestingly, there are no examples offered to clarify each rule, which is unusual for a modern rulebook.

Terrain is clearly defined, in something of a list format, with the txt quite closely packed together. A nice touch is the idea of ‘weaponizing the terrain itself, something that adds more elements to the overall game.

Creating a War Clan is a relatively simple process, but a fun one, with players being able to really theme their Clan to fit the figure collection they have or most desire. Again, the use of artwork here is excellent, with even the most basic Bondi having not only useful stats but a characterful ‘look’, and the image of the Shieldmaiden beset by zombies is excellent. The all-important ‘arming’ section is covered with generic weaponry and armour, really encouraging you to purchase or convert your figures.

The game focusses upon the use of Godspark, the energy released after the fall of the Old Gods after the Tree of Life collapsed. This is a campaign-based system, so players get to generate three God Powers from a chart as part of the War Clan setup. These powers are used by the generation of Godspark ‘points’, which are assigned when a player rolls higher than the level needed to succeed at an action – for example, if a player needs a 4 to make a Ranged attack, and they roll a 6, you generate two Godspark for your War Clan to use. These may then be used to activate any of the God Powers with the same cost or less or saved to use in the future. The available God Powers are outlined, with cost, effects and the chance to Boost them by spending more points.

As this is a campaign-based game system, there are full rules for running your War Clan over a series of games, including dealing with injuries, purchasing weapons and equipment and improving the members of your Clan or finding replacements for those who have passed. There is also the option to add the magical weapons of Norse mythology, now free for one suitably heroic warrior to wield.

Hiring new models, some of which come from Encounters, and the mixing of realities within the game universe, means players can add not only human warriors but also demi-mortal beings such as dwarves, elves and more, to aid them in playing through the 6 scenarios offered in the rulebook, which offer both primary and optional secondary objectives, victory conditions, the potential for Encounters along the way and the acquisition of the Glory which enables players to add to their Clan or simply boast about their achievements.

The Bestiary section outlines every possible race and creature that can be encountered in the game, both real and fantastical, all based upon the central tenets of Norse mythology or life in the past. Most creatures are neutral, but some are aligned with Corruption, evil, or the light, Divinity. These are Fractured Realms, and the humans of Midgard exist alongside the Fey folks of legend.

This is a fantastic looking book and a really well thought out concept. The Morpheus Engine has plenty of potential for all sorts of gaming but really works here. The blend of reality and mythology offers something different, whilst being firmly anchored with a well-researched mythology. Get your Vikings out, and prepare for Godhood!