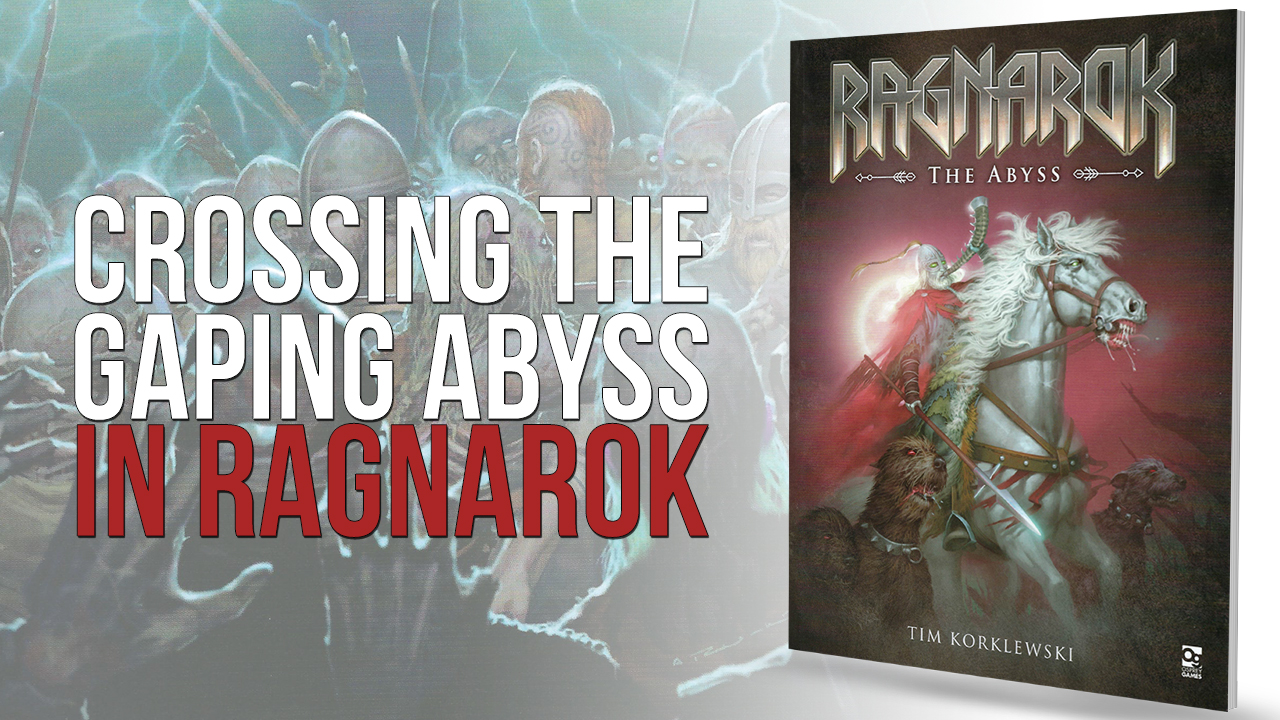 Ragnarok’s style is heavy on background narrative and this 112 page hardback book begins with a couple of pages of what I presume to be scene setting, which will no doubt excite anyone who can figure out what it’s all about.

We then get into an overview of ‘The Morpheus Engine’, this being the mechanics of the Ragnarok game system. It’s an interesting idea to include a refresher of the original rules in a supplement, and to be honest I can’t decide if this is a good thing in a “oh yes, I remember now, I’m can’t wait to see the new stuff…” kind of a way. Or if it’s a waste of space.

After our refresher we get into the new stuff, beginning with the “New War Clan Warriors” to be specific. This is a couple of pages of descriptions and profiles for four new warrior types, plus a new Special Ability: Rune Carving.

After that it’s ‘New God Powers’, eleven in total, expanding on those covered in the original rulebook and the first supplement The Vanir, with some well thought out and interesting new powers which can be gained during your quests.

We then have new ‘ability packages’ for the Children of Fenris, Daughters of Fate and the Undead.

Our next section is ‘New Rules’, which, whilst being optional, we are “highly encouraged” to use. There are two to choose from: Hordes, which is a way of manipulating groups of models and Realm-Breaker – a Slaine like warp-spasm.

Over the next 20 pages we have six new scenarios to challenge your War Clan, all of which are well constructed and will no doubt provide hours of bonus ‘heavy metal combat’ entertainment.

New ‘Secondary Objectives’ follow in a similar format to other sections i.e. a random-rolling table followed by a description of the objectives on offer. An on screen scan of some of the pages will give you a idea of what you could be aiming for in your Abyss led games.

Most of the rest of the book is taken up with ‘New Encounter Models’ i.e. new beasties for you to include in your Ragnarok games. You can expect to find: Dark faeies, large serpents, undead, trolls, tree spirits and several other creatures from Norse mythology and beyond.

The new monsters are followed by four new avatars. Before we conclude the new gribblies section with ‘The Wild Hunt’ encounter models.

The last two sections of the book cover ‘Tournament Play Rules’ and an ‘Abilities List’ – a complete, updated list of all Ragnarok Special Abilities.

The whole book is liberally decorated with great artwork all relevant to the subject matter, and Osprey’s trademark clear presentation style is, as ever, on display.

I’m not one for storytelling within a rulebook, but presumably if you have bought into Ragnarok you have already bought into that element of the game too, so you won’t be perturbed by loads of fantasy prose which is certainly over flowing with enthusiasm and effort.

If you are already a Ragnarok player what more could you ask for in a supplement; new rules, monsters and equipment all wrapped up in a well-designed and decorated book.