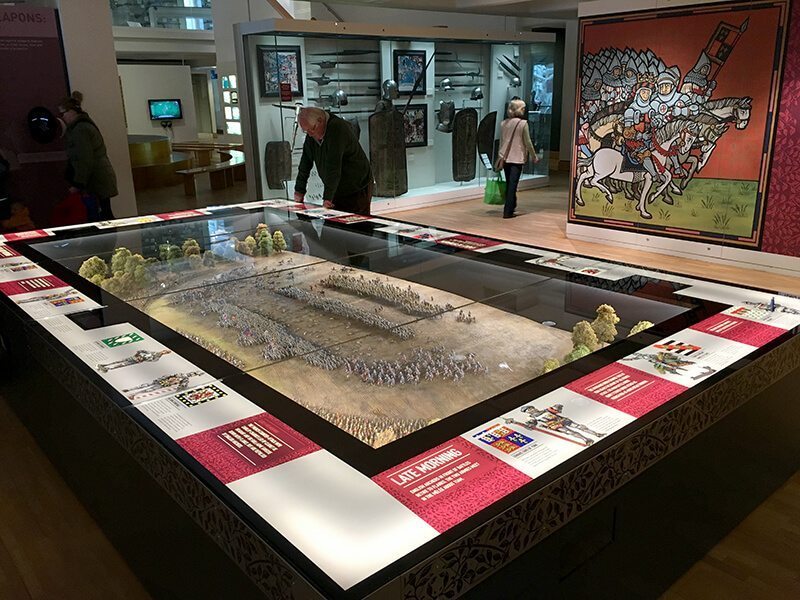 Saturday 23 April 2016 saw Wargames Illustrated in the company of the Perrys at the RAGE wargames event, Royal Armouries in Leeds.

The backstory to the event was the unveiling of the Agincourt Diorama which had been commissioned by the Royal Armouries, constructed by TM Terrain and populated by Perry Miniature’s 28mm figures. The diorama had been on display at The Tower of London, but has now been moved to its permanent home in Leeds.

Wargames clubs from across the area attended the well organised event, many of whom put on participation games that Armouries attendees eagerly joined in with.

Our photos focus on the two ‘eye-candy’ games at the event; our own Cheauchee scenario and a Battle of Agincourt game by Simon Chick and friends.

The gaggle of games

A shameless plug for the magazine that featured the Agincourt diorama article, plus our game beyond

The English (foreground) prepare to advance

The two most popular questions of the day were…

“Where can I buy the castle?”

And “what’s that covering on the terrain boards?”

The castle was scratch built by Michael Perry…

… and the covering on the boards is towelling…

made by Dave Andrews…

The figures are all Perry Miniatures….

… metal and plastic from their Hundred Years War range

Some incidental shots from around the Armouries –

Constructed by TM Terrain* and populated by Perry Miniatures. * That men gets everywhere (David Marshall/ TM Terrain) – his terrain also won ‘Best of show’ at Salute this year!

The French battle standard – The Oriflamme

French men-at-arms are driven back

A French advance under Marshal Boucicaut