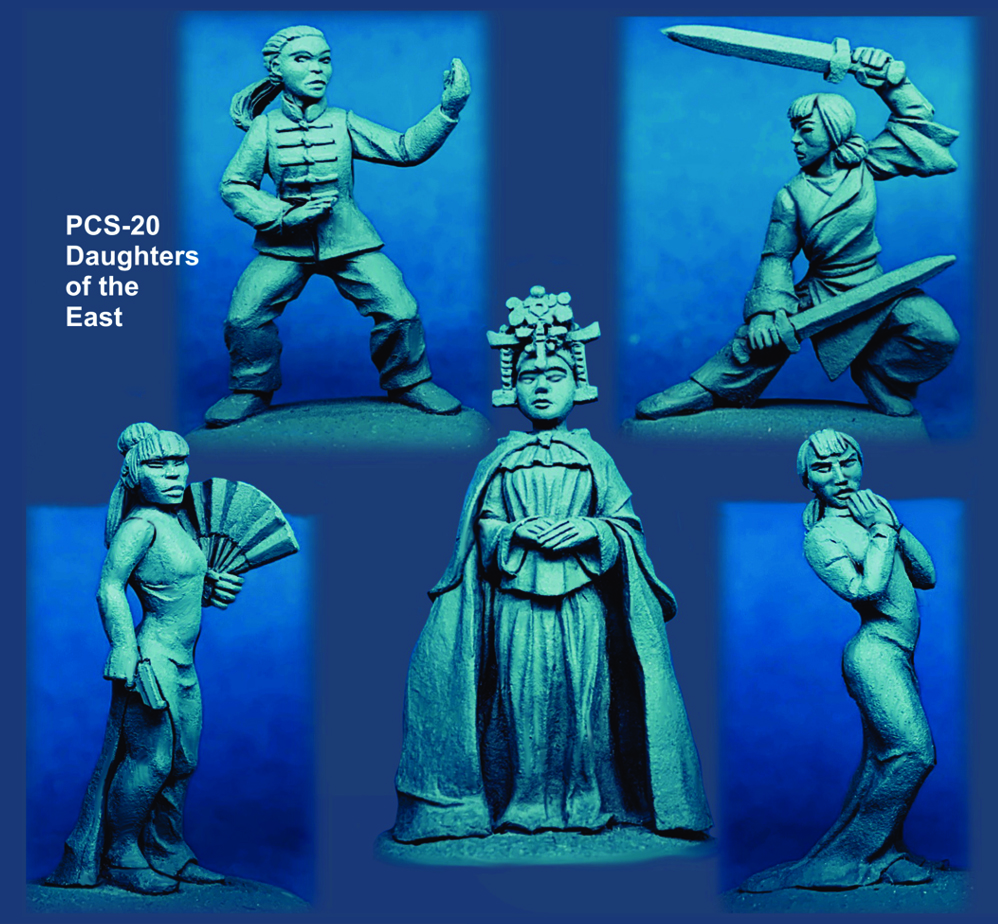 “Dangerous Dames” is a new line of miniatures from Pulp Figures of Canada, featuring, as the name suggests, the ladies of Pulp.

The first pack of “Rugged Adventurersses” (PHP 20) consists of a pilot, with pistol drawn and flying jacket over one shoulder, a beret wearing resistance fighter with an HMG and three generic adventurers with pistols who would not look out of place as the lead in any of the “Indiana Jones” movies. This pack would be ideal if your game involves dynamic archaeology in Egypt, South America or some distant corner of the world.

The next pack, titled, “The Museum of Natural History Ladies Exploration Society” (PHP 21) continues this theme, with the ladies once more kitted out for foreign climes. The first three miniatures of the “Daughters of the Empire” pack (PHP 22) would be your choice if you are looking for Darkest Africa miniatures, outfitted as they are in a variety of big hats, shorts and high powered rifles. The fourth miniature wears a scots bonnet, scarf and fur topped boots and would be at home in any winter climate or Scots Glenn. The fifth miniature is of a turban-wearing warrior from India, who is sculpted firing a pistol off to her left whilst wielding a sword in her right hand. Travelling further afield are the “Daughters of the East,” (PCS 20) two of whom are depicted in martial arts poses with two others dressed more in Geisha style, one unarmed and one with a pistol in hand. The final figure in this pack is a priest or monk who wears an elaborate headdress and cloak. The next pack are the “Gangland Gals” (PGJ 22) which pretty much sums them up, being armed as they are with pistols, shotguns and tommy guns. This pack would fit nicely into any 1920’s prohibition style game, although I also thought these miniatures would work well in a Call of Cthulhu or similar horror game as well.

Speaking of horror games, “The Evil High Priestess” pack (PWM 20)is a gift for any 7TV games or Pulp Cultist scenarios, as it contains not only the high priestess, but also an attendant carrying a knife on a pillow, the sacrificial altar and two “victims,” one male and one female, ripe for rescue. There is some great detail in this pack, from the little pentangles on the altar cloth to the symbols on the High Priestesses headdress, that make it well worth a look.

The last pack of miniatures depicts “Crash Callahan” and her faithful dog (PHP 25). The pack contains Callahan on her motorcycle, with her dog hilariously modelled in the sidecar, ears flapping, as well as dismounted versions of a pistol armed Callahan with her mutt. A fun pack that is very well presented, and although the motorcycle and sidecar come in a number of different parts, these go together very easily.

All the miniatures in this range are sensibly dressed and proportioned and it is great to see Pulp Figures taking this approach to modelling female miniatures we can actually use in our games. The final two packs in this series are the “Rugged Accessories” (PHP 23) and “Exotic Pets.” (PHP 24) The accessories pack includes extra pouches, machetes, backpacks, holsters and oil lamps that can either be added to your miniatures directly or simply used to decorate their bases or your scatter terrain. The exotic pets pack is a little gem, as it contains not only lovely models of normal animals, such as two cats, a parrot, a tortoise and even a lizard, but also a small feathered dragon, which is a great model.

All in all, a great series of miniatures all cast to the very high standards we have come to expect from Pulp.

Pulp Figures are available directly from https://pulpfigures.com in North America, or in the UK and Europe from http://www.northstarfigures.com/list.php?man=186&page=1