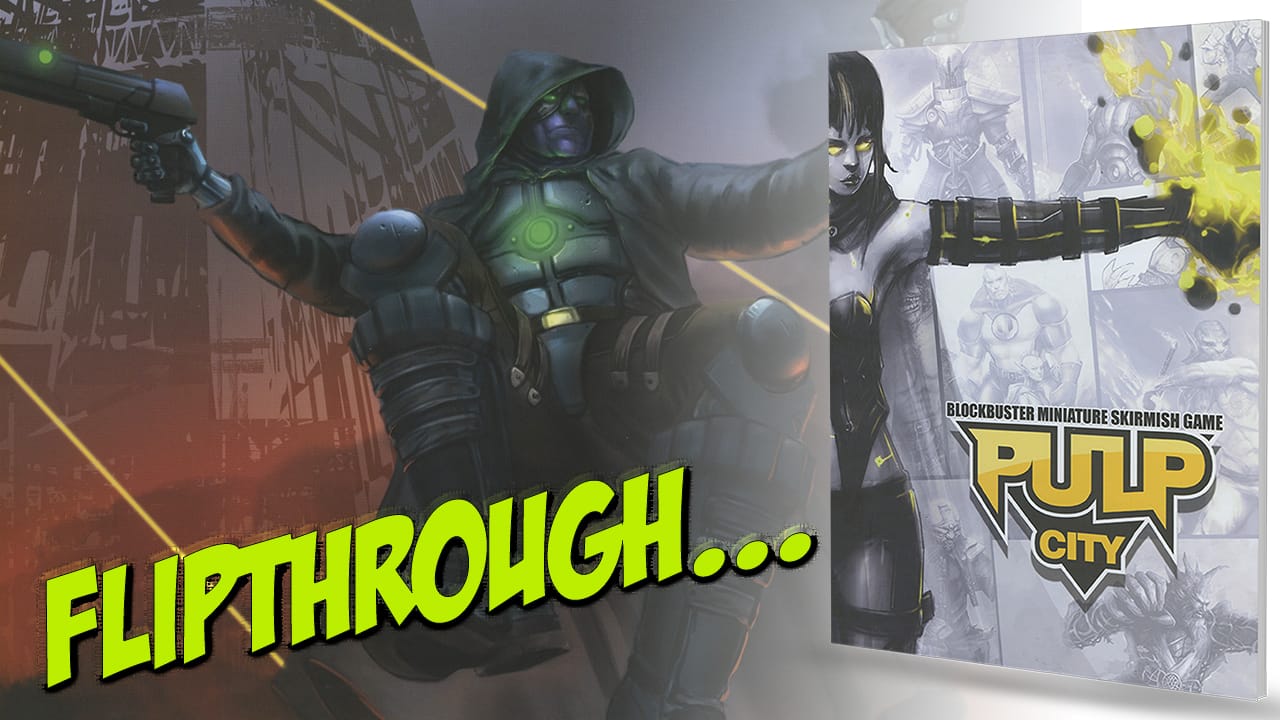 Pulp City is a game which sees super powered heroes take on super powered villains, all against the backdrop of a dark city in a world not unlike our own. Known as Supremes, the players take on the role of members of teams who battle against one another for either law, chaos or their own agenda.

The rulebook is of a high standard, and begins with an outline of the main rules. The game uses cards for each miniature, with a profile for each, an outline of the various attribute and other tests made on six-sided dice, activated by Action Points from the Action Pool, the three levels of character (Supremes, Minions and Monsters), the structure of a turn, and the overall turn process, which makes for a fluid, fast moving game.

The game rules are fairly simple, with each Activation of a character having a cost, which is ‘paid’ by use of the Action Pool. This Pool replenishes at the start of each turn, but this pool of points will never quite be enough to activate all your models. The Actions available to Supremes, Minions and Monsters are either fairly generic (Movement for example) or are Exclusive to that particular character, group of minions or a monster. Some of the offensive or defensive actions require line of sight, whilst others affect an area.

The Exclusive actions are based upon the world of the comic book, so can be devastating and destructive. Some are straightforward powers, others delve into the realms of science fiction or the supernatural. Of course, slugging it out toe to toe is a feature of the comic books, so rules and bonuses are provided for this aspect as well.

(With every model representing a ‘larger than life’ comic book-style character, the actual Pulp City itself is a setting full of potential adventures and dangers. Battles are fought on at least a 2’ by 2’ ‘slice’ of this multi-faceted city, defined by scenarios and player agreement. The city is ‘fully destructible’, with rules for making use of the various types of structures. Of course, a city has ordinary citizens, who are an integral part of the action and must be saved or made victims as desired.

There are various Factions defined within the rulebook, which may be used ‘off the shelf’ or used as a starting point for recruiting a Team and defining the Plot or narrative for your ‘story’. Leaders may only choose team members from a similar Alignment or Faction, with 3 types of card being available, Recruitment, the characters, Action, one-use ‘special’ cards, and Faction cards, which defines your Team’s special rules and origin.

Comic books are essentially story-led, another genre of fiction, so it is essential to create some type of narrative. The rules cover this with the Plots & Agendas section, which provide motivations and scenarios to form the basis of the story players create. Another aspect of a story can be the foes, and the Monsters section provides details of these extremely dangerous foes, the types of creatures who care little for Factions or have their own plans, usually to destroy and conquer!

The remainder of the rulebook outlines the main Heroic and Villainous Factions, outlining them in more detail, whilst also providing an insight into the figures available to game with. These represent the classic archetypes associated with the ‘four-color world’ of the comic book, embracing those from the ‘Golden Age’ down to the modern day. These are perhaps best exemplified by the miniatures available, with starter sets and individual miniatures coming with the relevant cards and information to be used in the game.

The rulebook and the miniatures are of a high quality, and will be of interest to any fan of the comic book universe. This set of rules guarantees a fast moving, action packed gaming experience where every die roll can lead to success or failure, plus the potential for the warping and destruction of Pulp City itself. Now, anyone for capes and cowls?