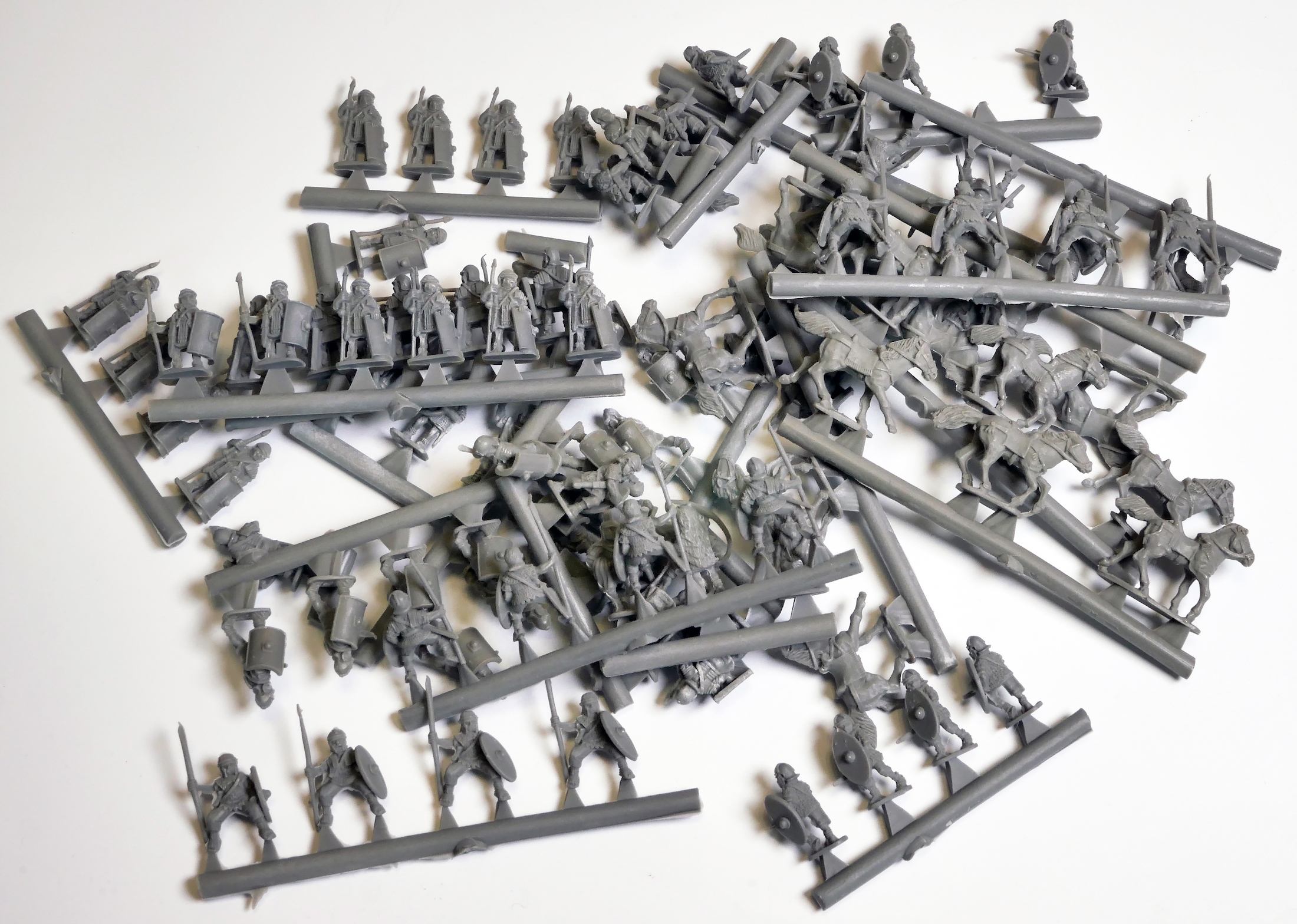 We are diving into the latest boxed sets from The Plastic Soldier Company, designed to provide purpose made armies for Mortem et Gloriam, the popular ancient wargames rules. Each box has enough infantry, cavalry, and light infantry within to create a starter army for the smallest level of MeG games, but these models can obviously be used by anyone wargaming with 15mm Ancients.

The sculpts are based on a previous range of metal miniatures produced by Corvus Belli and are now being released in Ultracast under license.

The command figures contain an officer, standard and musician, with nice detail on the signifier’s wolf pelt. The veteran legionaries are in advancing poses, shield up, gladius drawn and wearing the iconic lorica segmentata armour. The regular infantry are in a standing pose, carrying their pila and rectangular scutum shields.

The auxilia are carrying oval shields and gladius and are wearing mail and trousers, with the cavalry similarly dressed but carrying spears. These are all nice sculpts with an impressive amount of detail for 15mm. There are at least two variations of each troop type, so it is possible to vary the look of your units.

The mounted command consists of a General, standard bearer and musician, whilst the odd numbered foot command has three standards, three generals and a further General wearing an impressive cape. There is a good mix of poses, arms and armour within each troop type, which will allow you to create an irregular warband look to your army. Even the four slingers have three different poses, whilst all four javelin men are also differently posed.

Within the miniatures there are some real characters, including the bare-chested commander, who is displaying his beer belly, or the warriors holding severed heads. Again, all these figures are nicely posed and have a great deal of detail; nothing seems to have been lost by releasing the Corvis Belli range in Ultracast.

Ultracast itself has pros and cons. The pros are that it looks like hard plastic but, if bent, will spring back into its original shape. Also, paint should not flake off as it often does on soft plastic miniatures. Some of the poses mean that the figures will not stand up once cut from the sprues but this should not be an issue, as they will almost certainly be glued to bases.

The only problem I found was that occasionally there was some prominent flash on the miniatures that, because Ultracast is so strong, took a really sharp knife and some patience to get off!

Whatever you may think about Ultracast, at £35 each, these boxes represent good value for money. The diverse and high-quality contents make them an ideal option for someone who wants to quickly put together an ancient army.