Prussian and Austrian Packs for 1866 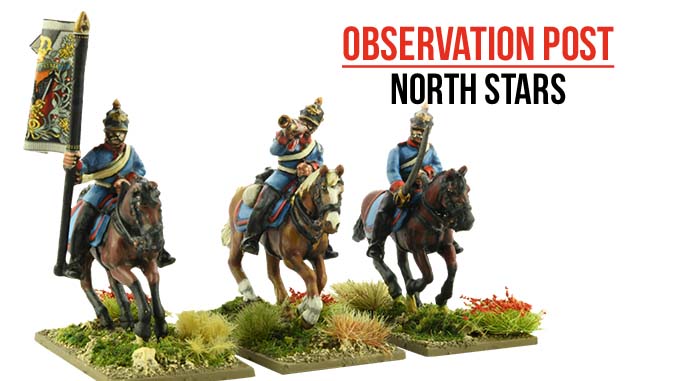 These new releases are part of North Stars expanding range of miniatures designed for the 1866 war between Prussia and Austria, although they are suitable for the earlier conflict with Denmark in 1864 and the later Franco Prussian War.

First up are the Prussian Dragoons, wearing pickelhaube style helmet, Prussian Hussars in busby and Austrian Cuirassier wearing their distinctive crested helmets. Each pack contains three horses and riders. The troopers come with separate sword arms, allowing you to personalise your units, whilst the command packs come with an officer, standard-bearer and trumpeter. The detail on the models is excellent, with even the badges on the front of the helmets and the edging on the saddle blankets visible. There is clear definition on the straps and equipment that would reward the use of washes or inks.

Also newly released is the Prussian 12 pounder shell gun and Prussian artillery crew. The crew are in standard gunnery poses but are modelled with open hands and come with a separate sprue of rammers, sponges and buckets for you add as you wish. Again, these miniatures are very detailed and would be a joy to paint. However, the real gem is the gun itself. The decision to cast it in resin has allowed the designer to really go to town on the detail on this model, with the chain links, elevator screw and barrel detail clearly defined.

Finally, to order all of these chaps into battle, is a new pack of Prussian High Command. This pack comes with three mounted figures, consisting of two Generals in picklehaube helmets and one aide de camp in a saluting pose. Again these are very nice figures, well detailed and posed. I particularly liked the huge handlebar moustache on the older General!

Kudos to North Star not only for producing an excellent range of figures but also for choosing to produce them for one of the less well covered wargaming periods. This was not a conflict that had caught my attention before but having seen these miniatures I fully intend to have a closer look.

The Bismarck: for Victory at Sea