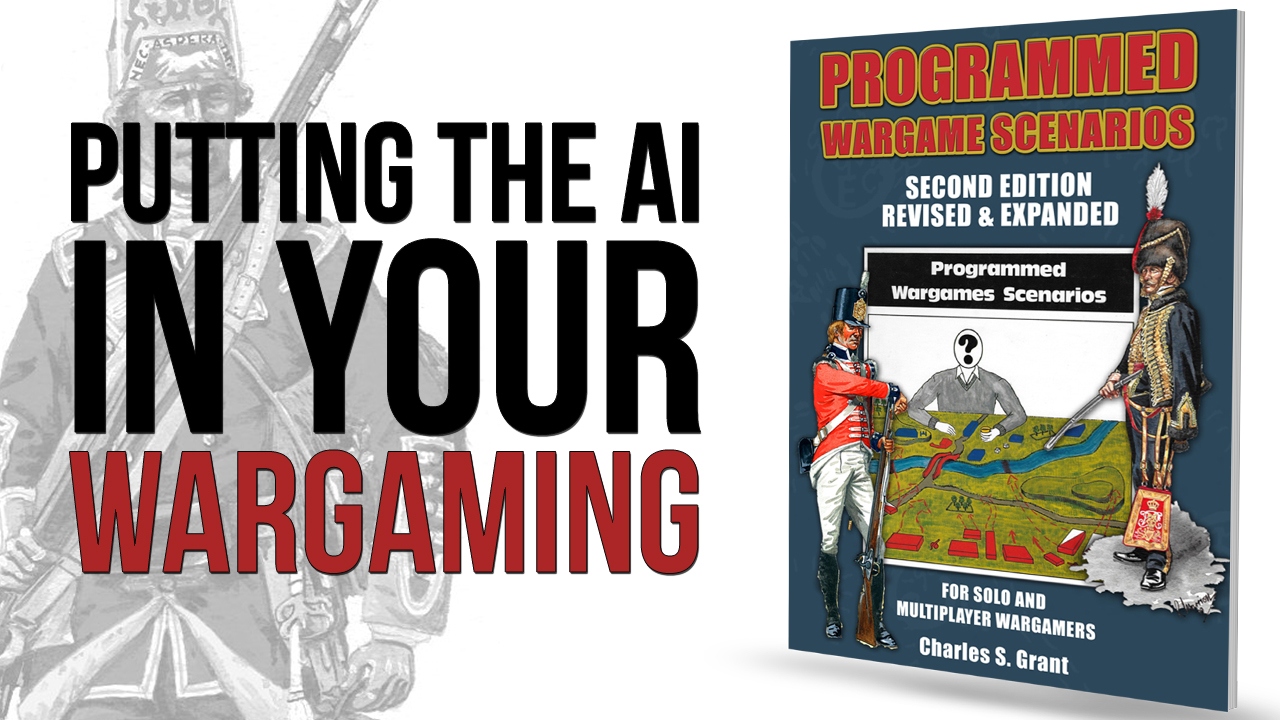 Programmed wargames Scenarios is the latest book by Charles S Grant to be revised and re-issued by Caliver Books, this time with some new scenarios added. The A4 softback book runs to 167 pages and although entirely in black and white, is liberally illustrated with excellent artwork depicting soldiers through the ages.

Nineteen different scenarios are provided here, along with suggestions for fighting two mini-campaigns. The scenarios are all very different, with ideas provided for holding a hill line, through river crossings to ambushes and fighting withdrawals. Each scenario is designed to have as much flexibility as possible, so that it can be played numerous times with different forces and over different terrain. So how is this achieved?

Well, first of all, there is a table of different forces at the back of the book. These are divided into three columns with forces for Ancients, Horse and Musket and 20th Century games provided, although the forces are flexible enough for you to easily adapt them to your own period. Listed here are 39 different forces for each of the three periods. When you have picked a scenario, the Red or Blue force will be given the option of three possible armies from this list, which they can either choose or roll randomly. This ensures that if you play this game more than once, there is a good chance either your force, or the opposition, will be different.

The terrain is decided in a similar manner, with at least nine possible boards for each scenario. You randomly select three, which then cleverly fit together to become the terrain over which you must attack or defend.  Again, this system ensures that the terrain is very unlikely to be the same no matter how many times you choose to play the scenario.

It is perfectly possible to stop there and use this book simply to generate interesting scenarios for you to play against an opponent at your club or regular wargames evening. However, the author has designed this book with solo gamers in mind and as such each scenario has a “pre-programmed “ element.

Essentially, you read the outline of the scenario and decide if you want to be the Blue or Red player. Having picked a side, you then read the briefing for your side only and deploy your troops accordingly. Only having done so do you then read the pre-programmed section for what your opponent does. This is a very clever idea, as the author has listed a number of tactical options that your enemy might employ, some of which are decided by the roll of a dice and some are of the “if Red does X then Blue will do Y” type of response.  This allows you to play the games either solo or with both players playing against a pre-programmed opponent.

Initially I was a little sceptical about how this would work in practise, but the system that the author has developed works very well and ensures that the enemy troops employ realistic tactics and use the ground effectively.

Objectives for each force and victory conditions are given at the end of each scenario, with objectives usually having to be achieved within a set number of turns.

If you are looking for some interesting scenarios to use for your wargames club, then this book is definitely worth a look, especially if you are considering a small campaign but don’t have the time to organise one. However, for those of you currently playing solo wargames, either through choice or COVID necessity, then this book is a must. All the hard work has been done for you and with each scenario capable of being played multiple times with different terrain and forces involved, there are enough scenarios here to easily last you through another lock down.