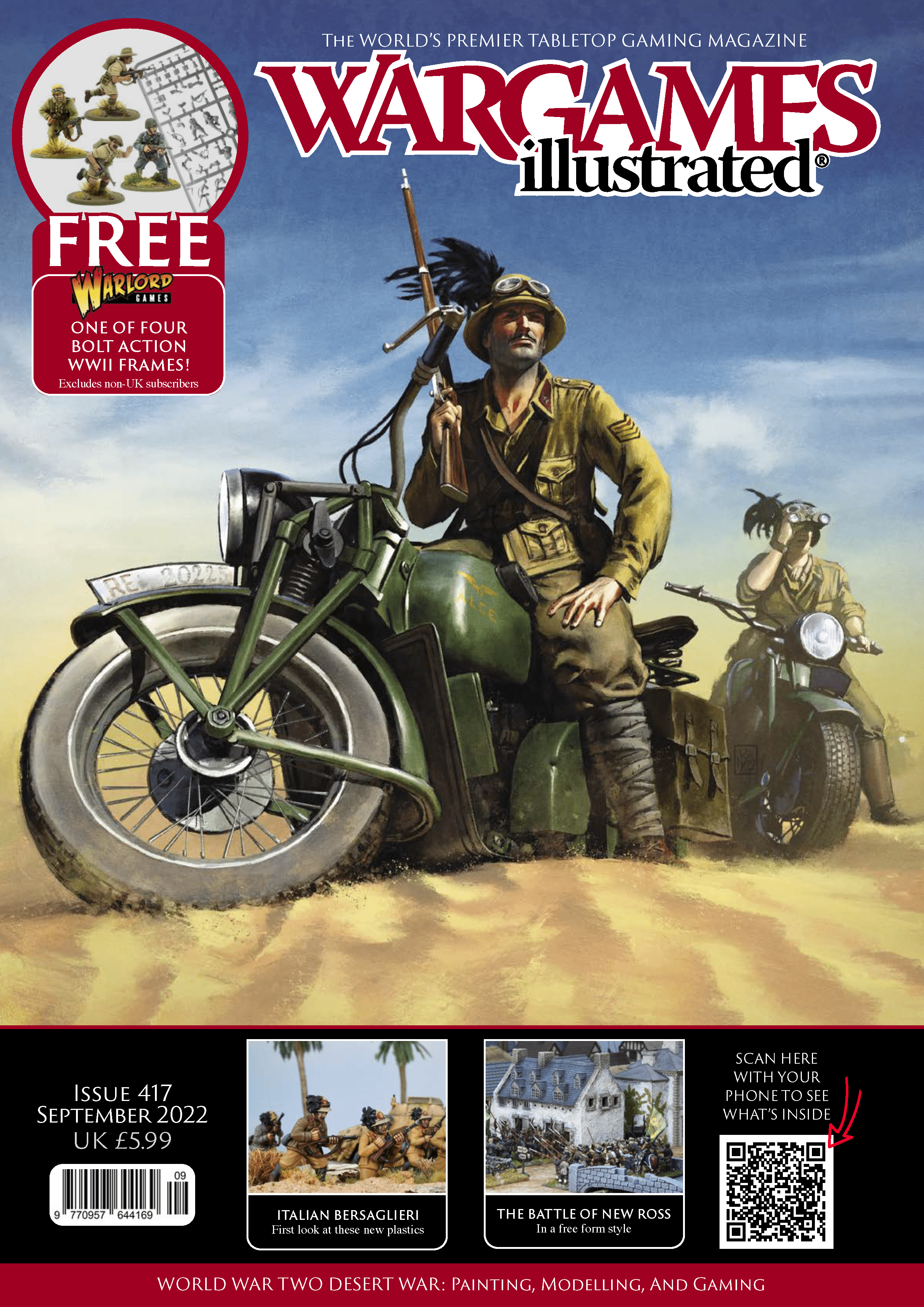 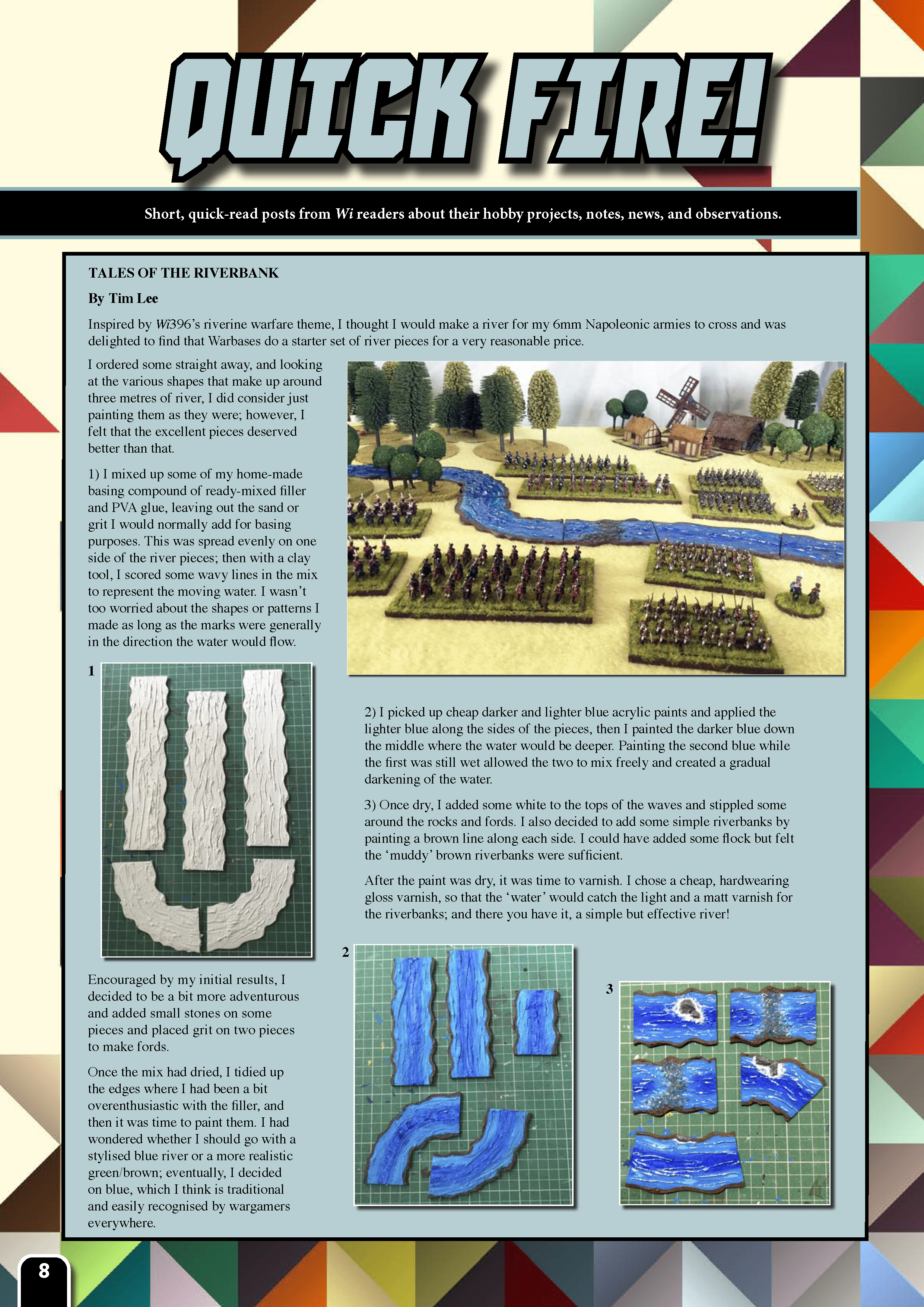 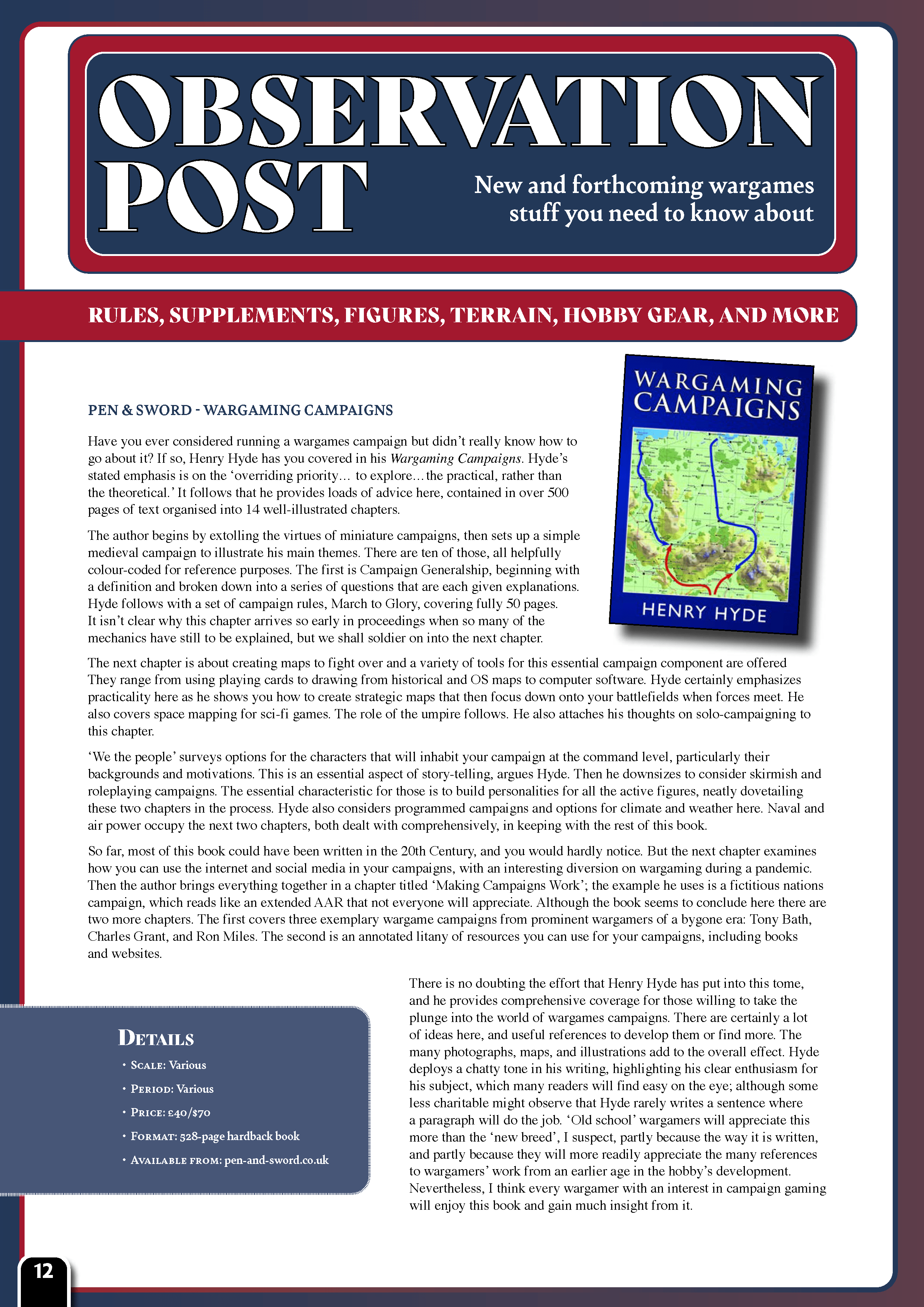 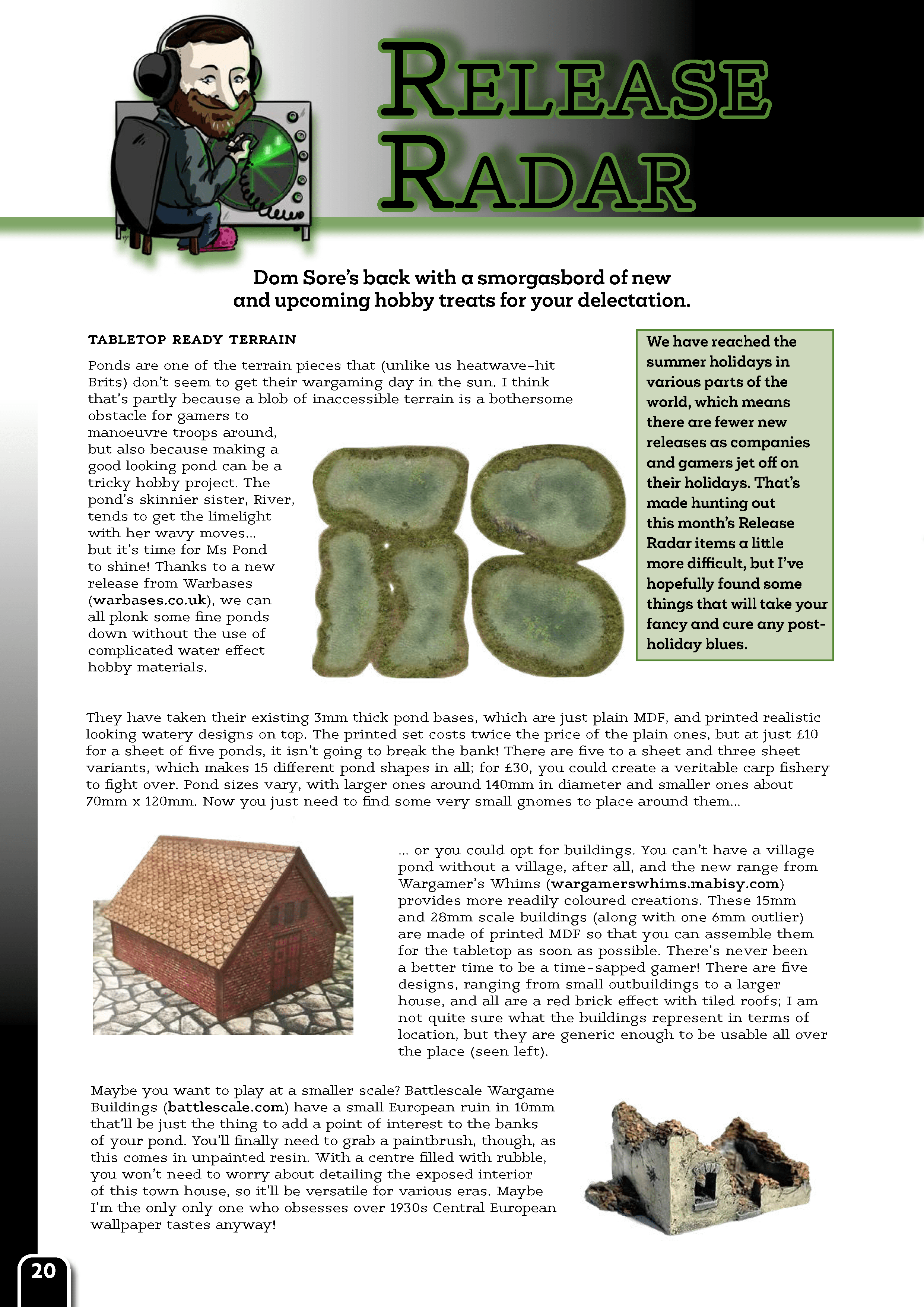 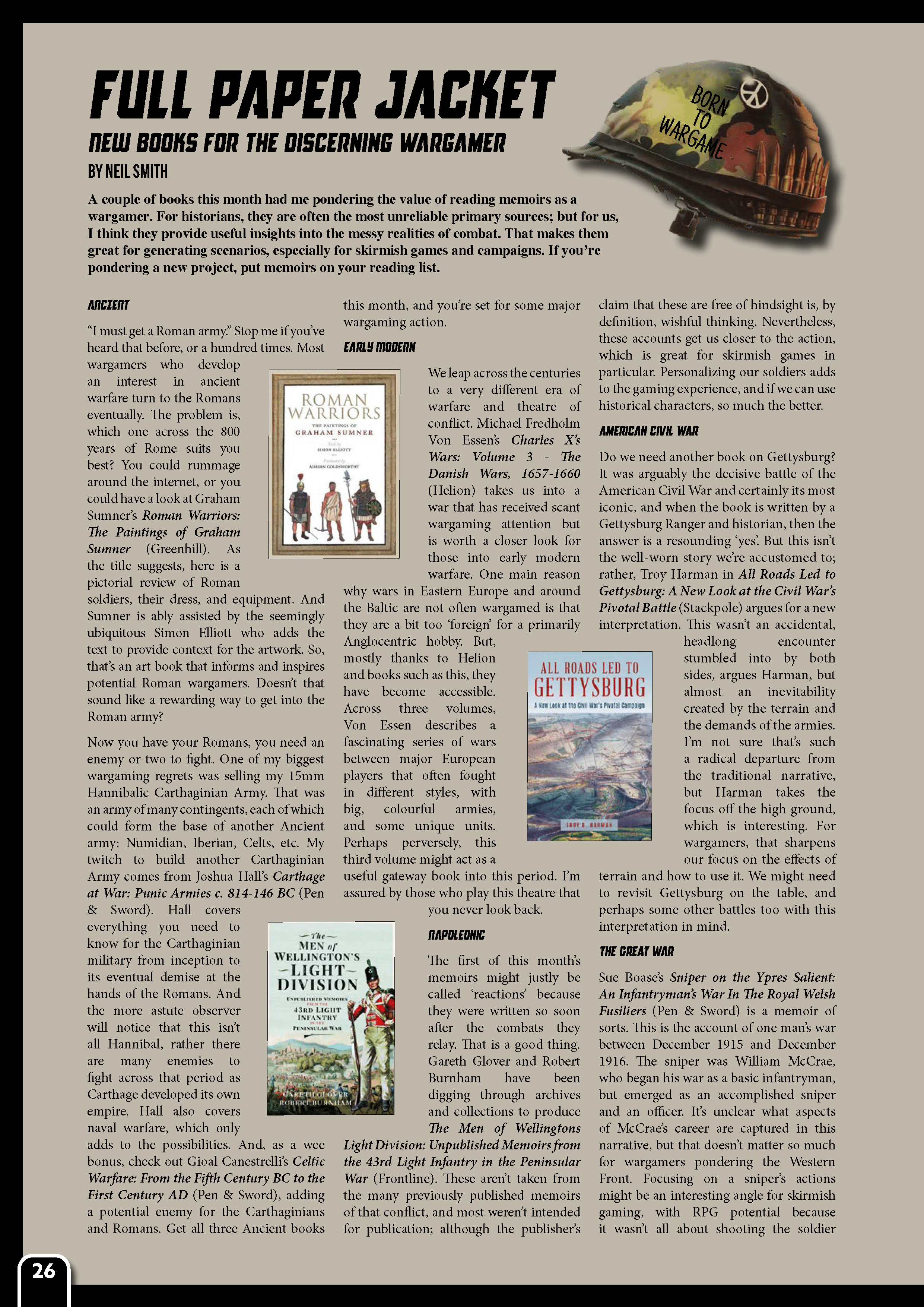 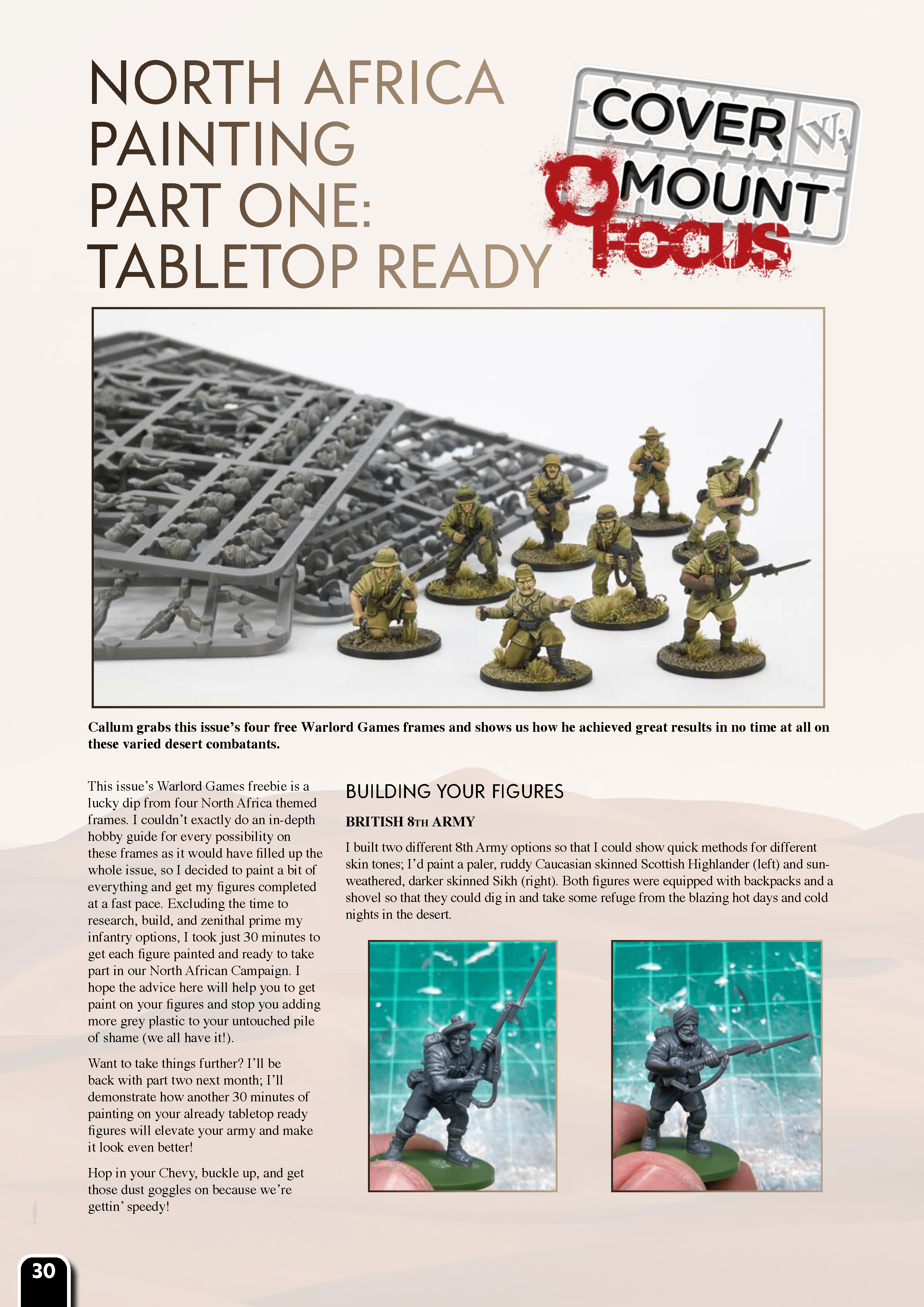 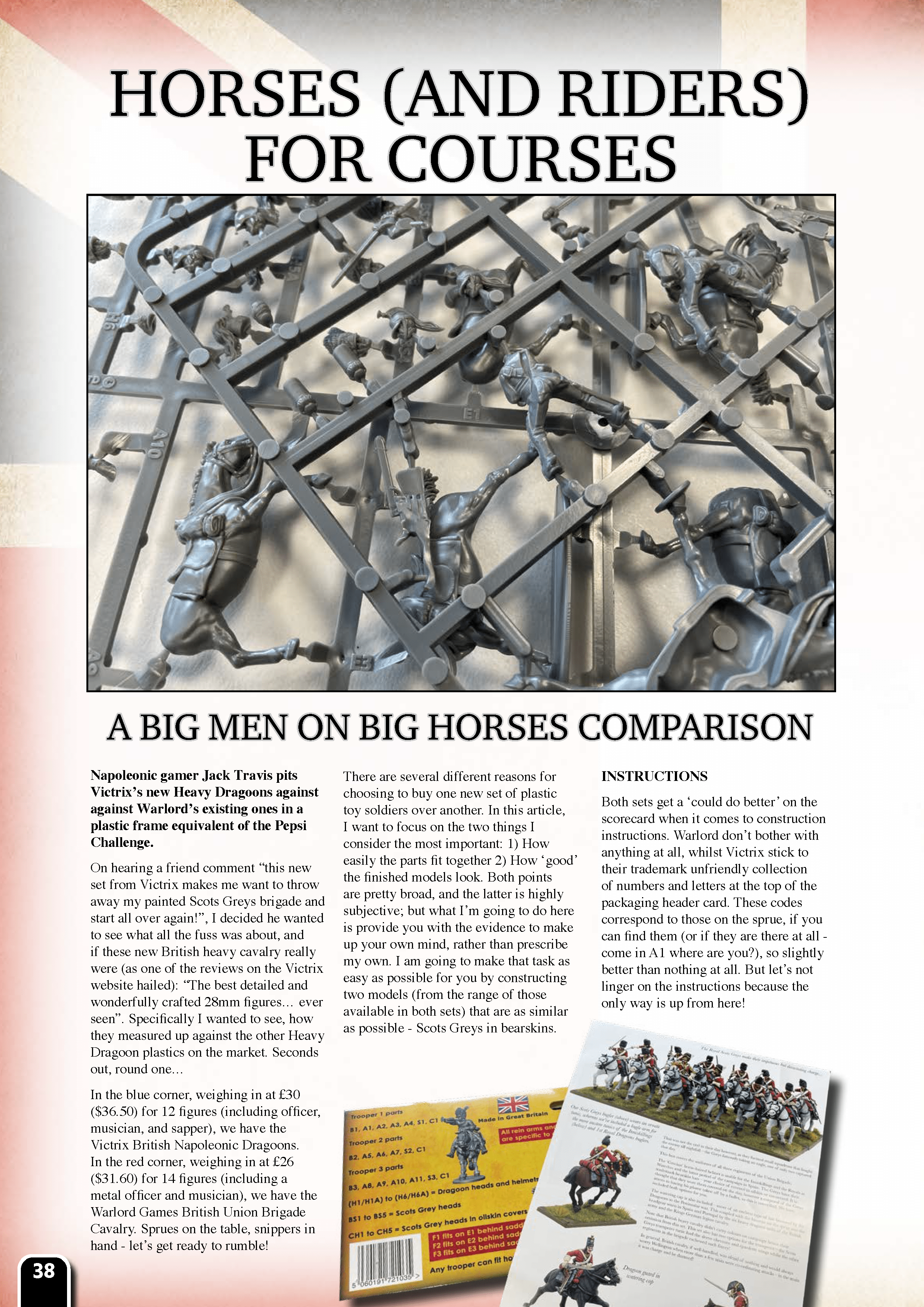 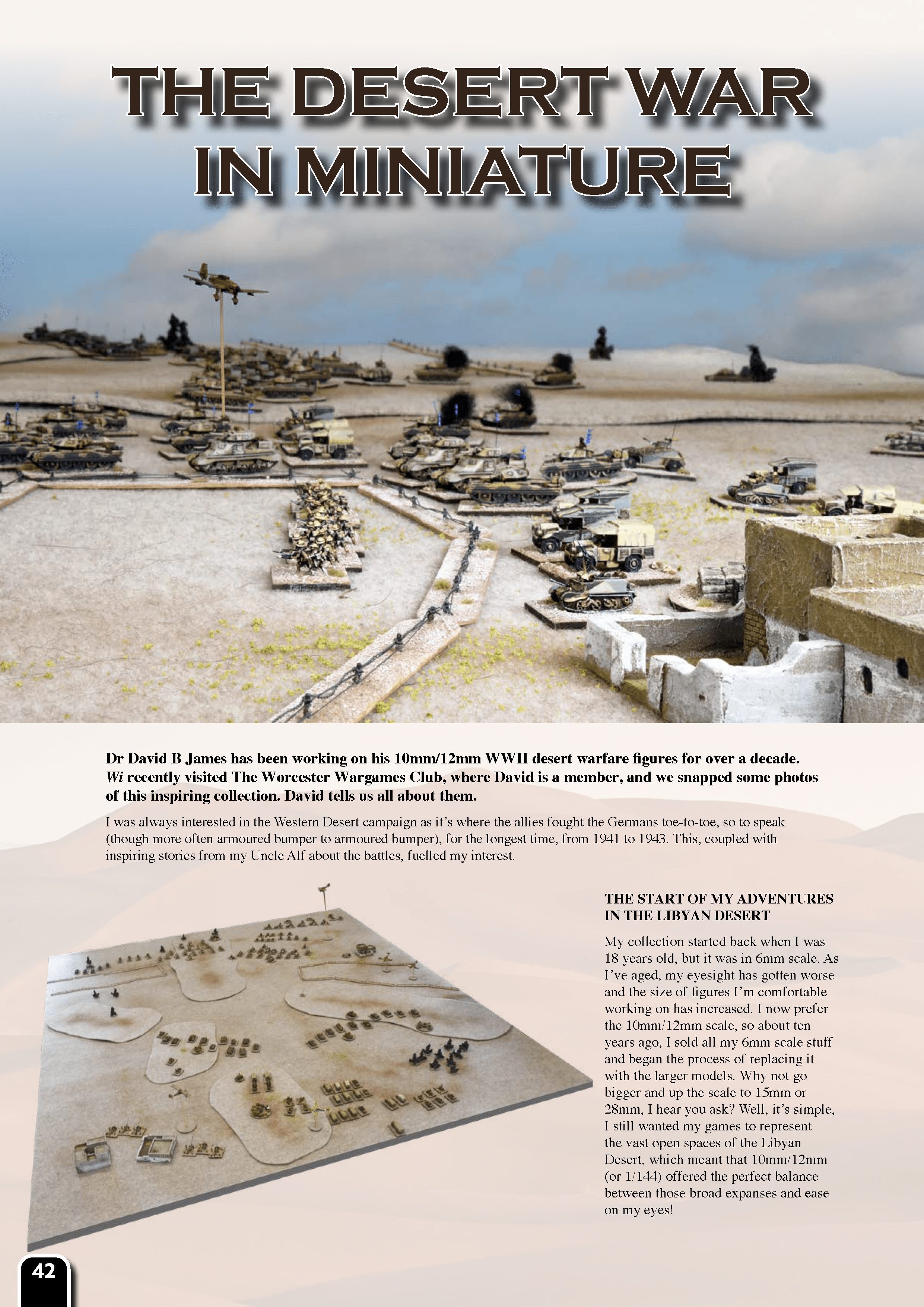 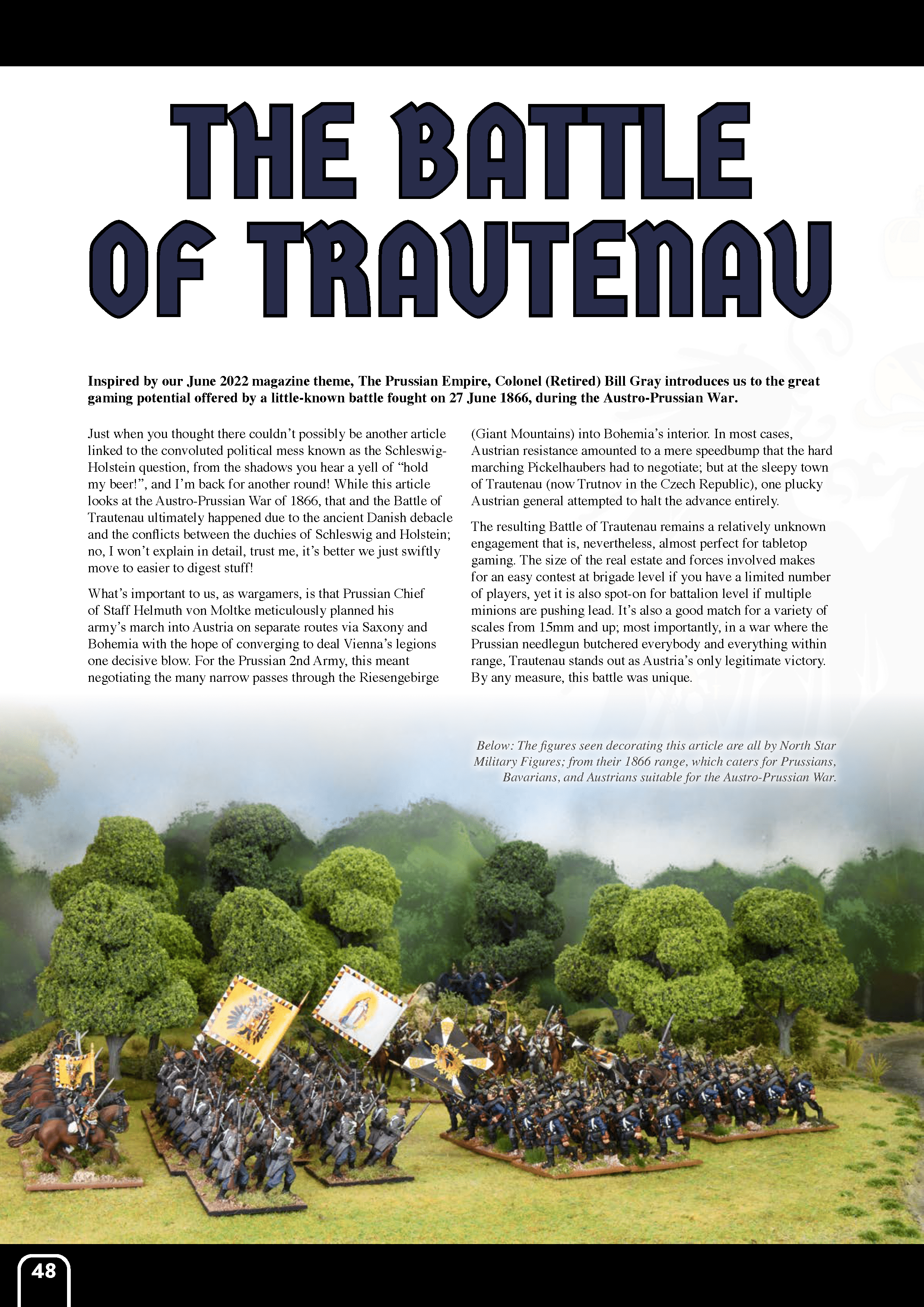 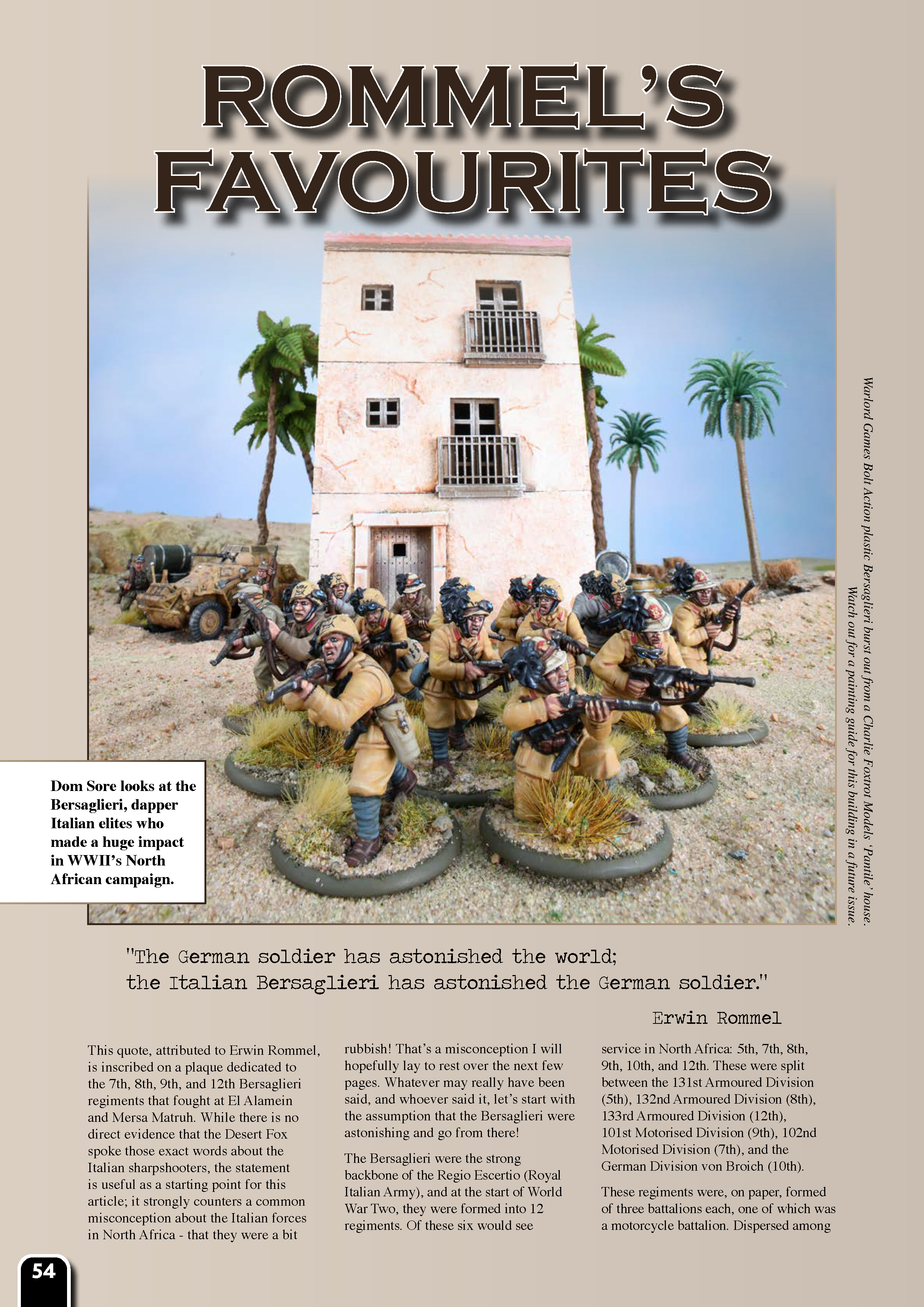 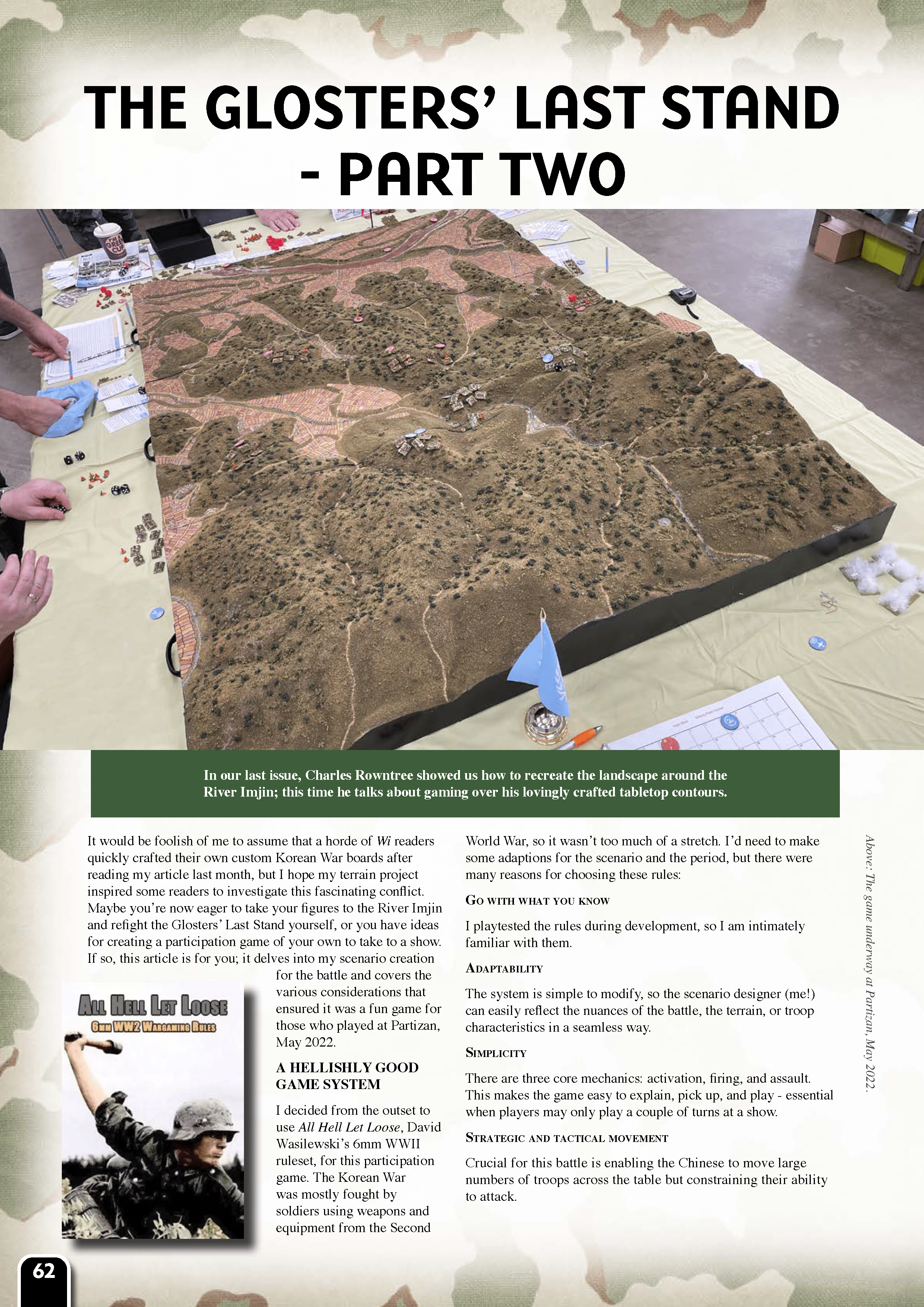 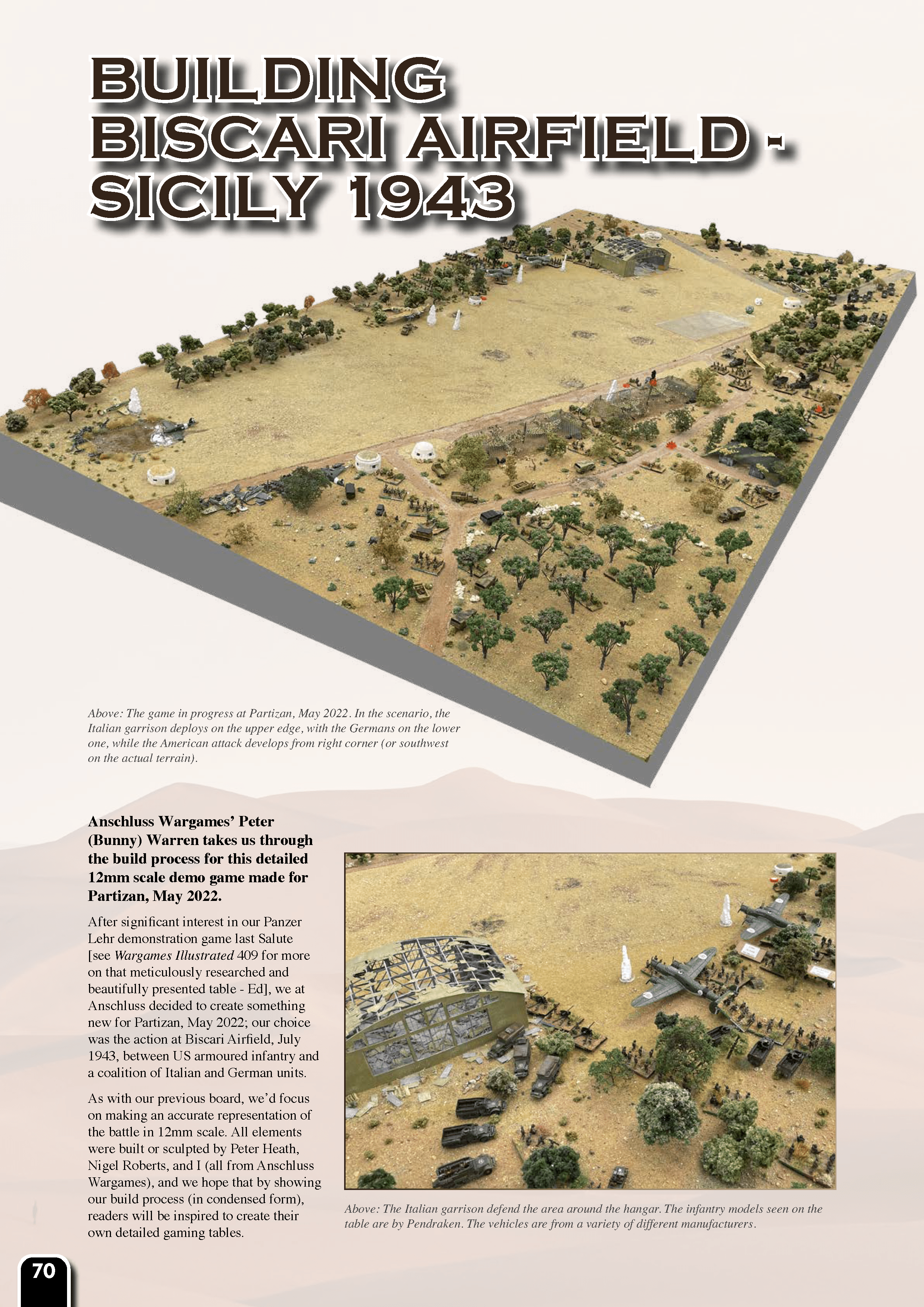 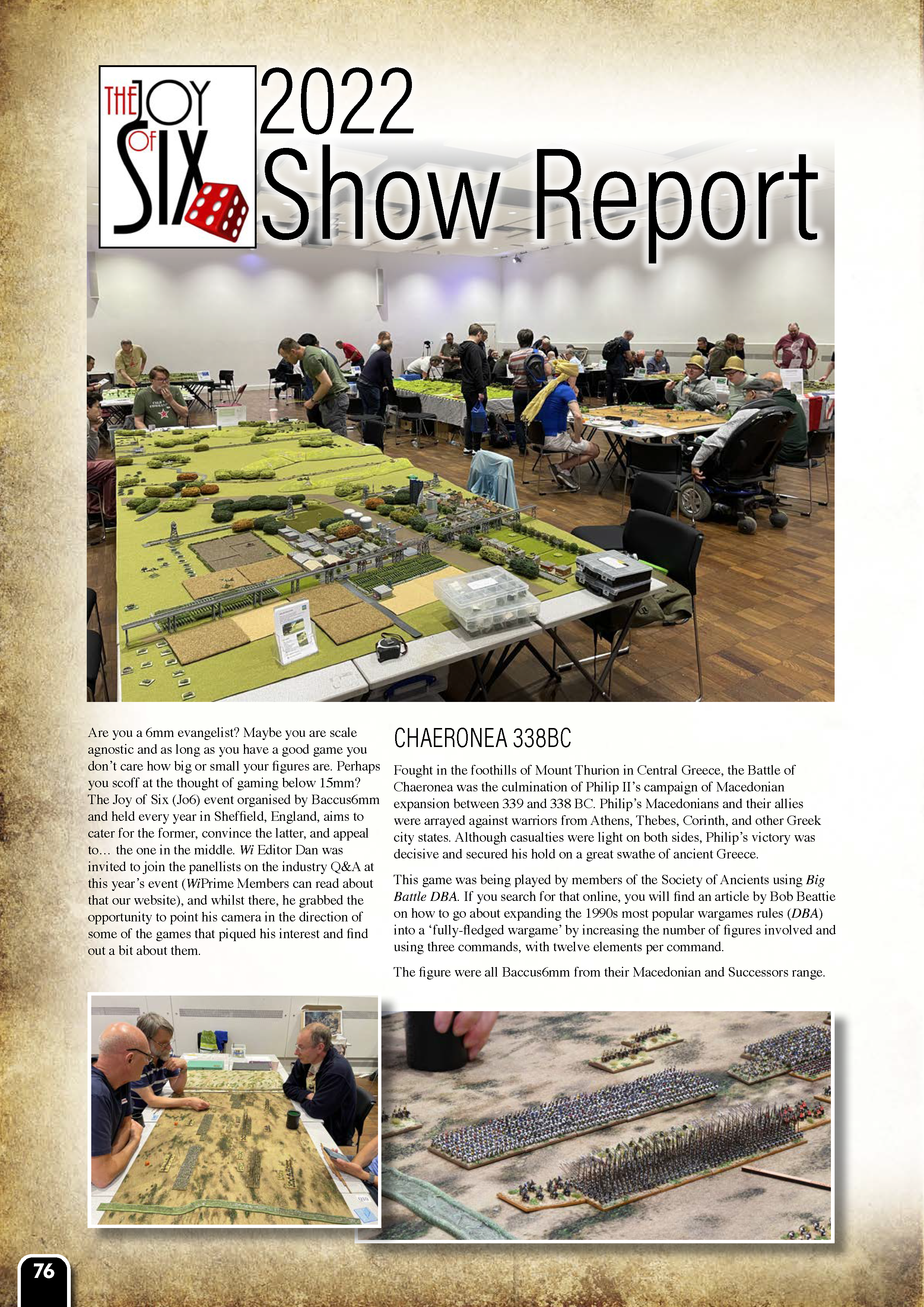 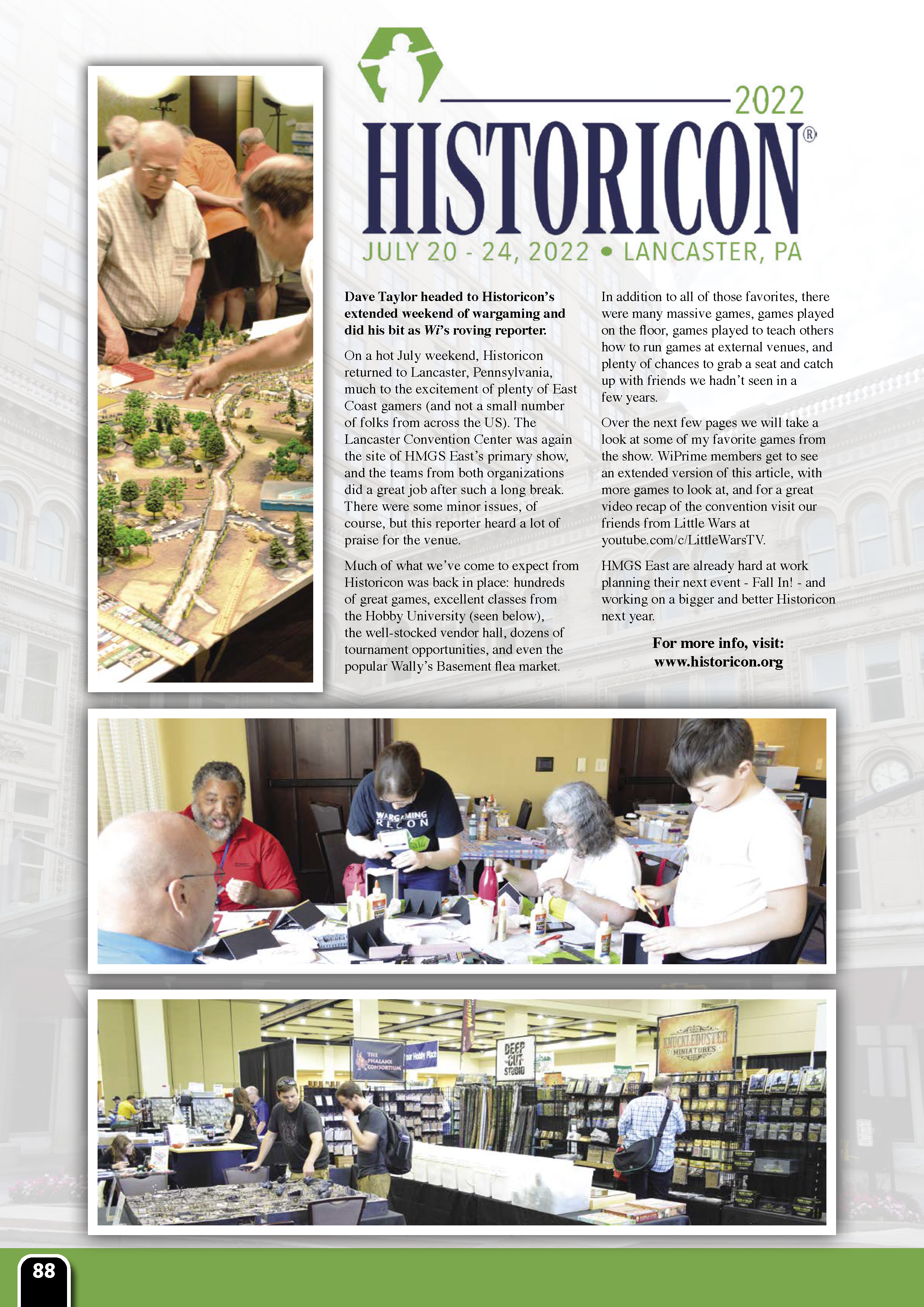 After a couple of months without a bagged gift we decided to hit you hard with a haul of possible freebie frames this month. Courtesy of our friends at Warlord Games you will have received one of four splendid sprues: British Commonwealth Infantry, British 8th Army, Afrika Korps, or Italian Infantry and Blackshirts. If you didn’t get the one you wanted – quick, get back to the shop and buy another copy of the magazine!

All of these minis are suitable for your Bolt Action WWII adventures in the desert. Desert warfare has been described as a tactician’s paradise and a quartermaster’s nightmare, and this was evident in North Africa in 1940-43. As wargamers, we tend to be less concerned with the supply issues and delight in the nuances of the combat. Although harsh, the desert battlefield was almost devoid of interference, allowing the professional skills of the soldier to be applied tactically for purely military purposes, something that we can bring to the tabletop in our games.

On page 30, our resident painter Callum brings you a guide to getting your free figures desert-ready in no time at all, and we have hat-trick of further forays into the sun with articles on building Biscari Airfield, an excellent 10mm Desert War figure collection, and Rommel’s Favourites – the Bersaglieri. I would also like to point you in the direction of our Historicon 2022 report – it’s great to see this grand old convention firmly back on its feet again after last year’s lockdown curtailed event.

OBSERVATION POST
Your monthly roundup of notable new releases in the hobby.

FULL PAPER JACKET
Neil Smith’s look at forthcoming book releases that would be worthy recipients of your shelf space.

THEME:
FRAME FOCUS – NORTH AFRICA PAINTING PART ONE: TABLETOP READY
Callum grabs this issue’s four free Warlord Games frames and shows us how he achieved great results in no time at all.

HORSES FOR COURSES
Napoleonic gamer Jack Travis checks out how the new Victrix British Heavy Dragoons measure up against the other Heavy Dragoon plastics on the market.

THEME:
THE DESERT WAR IN MINIATURE
Dr David B James has been working on his 10mm/12mm WWII desert warfare figures for over a decade. Wi recently visited The Worcester Wargames Club, where David is a member, and snapped some photos of his inspiring collection. Here David tells us all about them.

THE BATTLE OF TRAUTENAU
Inspired by our June 2022 magazine theme, The Prussian Empire, Colonel (Retired) Bill Gray introduces us to the great gaming potential offered by a little-known battle fought on 27 June 1866, during the Austro-Prussian War.

THE GLOSTER’S LAST STAND – PART TWO
In our last issue, Charles Rowntree showed us how to recreate the landscape around the River Imjin in Korea, this time he talks about gaming over his lovingly crafted tabletop contours.

THE JOY OF SIX – SHOW REPORT
Editor Dan travels to Sheffield, England to indulge in The Joy of Six.

HISTORICON 2022
Our stateside roving reporter Dave Taylor heads to the biggest historical wargaming convention of the year and reports back on some of his favourite games.