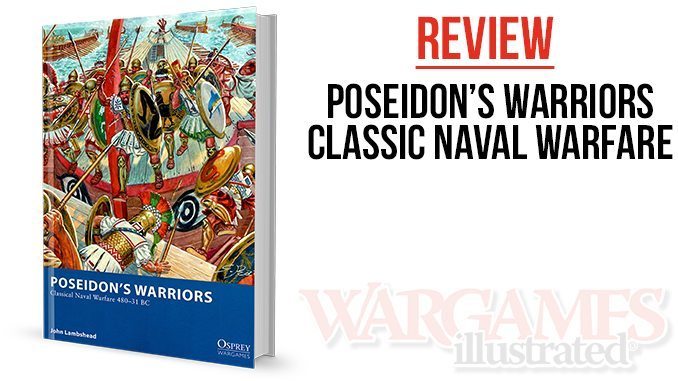 I’m not sure if I agree with the author that naval wargaming with ancient war galleys provides the most fun of all warship periods, but there’s no arguing that the ramming tactics of the period necessitate aggressive action both in reality and on the Wargames table…. and adopting a kyklos formation is never going to secure you command of the seas!

Poseidon’s Warriors sets out to recreate the large-scale fleet actions of the period without undue complexity and with minimal record-keeping. Although intended for use with 1:1200th scale miniatures, as with most rules it’s simple enough to adapt them for other scales.

Ships fight in squadrons, the number of ships in each depending on the size of ships; large ships count as a squadron on their own, whilst smaller ones such as triremes fight in squadrons of five; medium ships, quadriremes or quinqueremes fight in three ship squadrons. Squadron cohesion is extremely important and failure to keep the ships in your squadrons together impacts severely on your admiral’s chances of success.

The turn sequence is straightforward. An initiative phase when the winner can decide to go first or second; the operational phase for movement, ramming, oar strikes, artillery…yes, artillery, and then boarding and towing… I suspect that there will be a lot of the latter. And the final phase is morale.

All the basics such as building and organising your fleets are included, and in the 64 page book the basic rules take up just 8 pages and even the advanced rules only add a further 3 pages.

There are six generic scenarios to get you started; a ‘freestyle’ terrain generating system, and 23 pages detailing historical fleets and appropriate scenarios which will undoubtedly prove very useful.

The rules also include an introduction to classical war galleys and a brief page on appropriate tactics and of course the ubiquitous QRF (Quick Reference Sheet). For anyone wanting to find out more on the subject there is a useful suggested reading list, and I can personally recommend Hellenistic and Roman Naval Warfare 336BC – 31BC by J.D. Grainger and published by Pen & Sword.

PROS: A very simple core set of rules that I’m sure players of any age or ability will quickly learn, so they can concentrate on “sneaky and cunning manoeuvring” to gain the optimum position for ramming whist trying to prevent their opponent from doing the same.

CONS: Well, there aren’t any major ones although I did find the inaccurate captioning of some photographs irritating after a while. I mean it’s not that difficult to differentiate between a 1:1200th scale model and 1:300th one is it?
In short, Poseidon’s Warriors provides a good introduction to an interesting period of naval warfare and unlike some naval rules are not so complex as to deter a newcomer to the subject from ‘dipping their toes in the water’ of the azure blue Mediterranean, Aegean or Adriatic Seas. So, if you’re already interested in the subject, or think that you might be, Poseidon’s Warriors is a very good place to start.