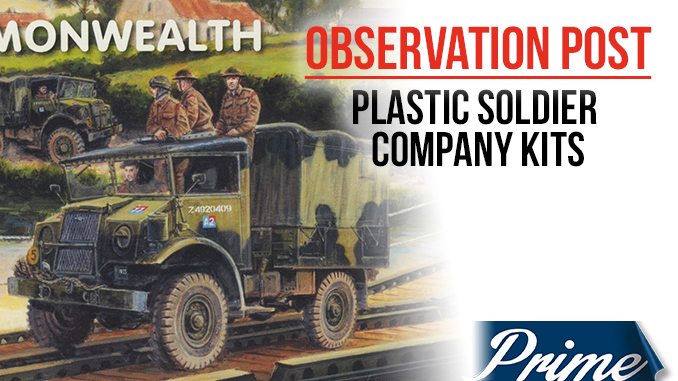 The Plastic Soldier Company continues to impress with pretty much all their releases. We have three boxes of 15mm plastic goodness from them, covering three very different areas.

First of all, we have the British 25pdr and CMP Quad Tractor. This is both an iconic artillery piece and the tow vehicle for it. The boxed set contains four guns, each of which has the option to be created as an 18’25pdr or a 17/25pdr ‘Pheasant’. They can also be fielded with or without a muzzle brake, a choice of gunshields is provided and the gun carriage itself has two variants. That’s an awful lot of variety just on the gun sprues.

There are also four limbers with the set, plus the same number of the iconic CMP Quad gun tractors, one of my favourite ‘light’ vehicles of WW2. In addition to all that, you are provided with two different crews, one suitable for the desert war and one for use in North West Europe. As always, the ability to field early and late war versions of the weapon, plus alternate crews, makes this a great kit for the price. The same gun and tractor combo was used throughout the British and Commonwealth forces, meaning whatever forces you want to collect, this is what you need.

The next kit is for the Axis powers, most notably the German forces. The SdKfz 231 Armoured Car saw service in reconnaissance units during the whole of World War Two. There are enough parts to create five vehicles, with the option to upgrade the 20mm cannon to a 75mm to create a 233 Stummel or the 263 command vehicle with the additional radio equipment. There are two crew figures provided for each armoured car, all in standard uniforms that could have been used in the majority of theatres. Intended for use as a replacement for the cavalry of old, this would be a fast moving addition to any German armoured or combined arms unit, yet packs enough of a punch to hold its own and cause some damage to other lightly armoured vehicles.

The last box is that seemingly rare thing that other manufacturers don’t really produce but every WW2 commander should field – a box of 15mm trucks, in this case five of the British and Commonwealth CMP 15cwt light truck. Smaller than the Bedford, this was nevertheless one of the workhorses of WW2 when it came to transporting men and materials to the frontline. This kit has no options built into it, because it doesn’t need it – a light truck is just that, designed for transport and found all over the wide-ranging battlefields of this world wide war. Personally, I don’t think you are really a WW2 gamer unless you have a whole variety of the less ‘glamorous’ aspects of the war – for every tank or platoon of soldiers, there has to be a series of trucks that supply men and machines at the front with fuel, food and ammunition.

So, there we have it, just three of the hundreds of kits available from Plastic Soldier Company in 15 and 20mm scale. I wish that the 28mm gamer like myself had access to as much choice and variety of plastic kits in such a ‘cost friendly’ package. Once again, PSC show that they are willing to offer kits for every aspect of WW2, from artillery through armoured vehicles and down to the humble truck that supplied them all.