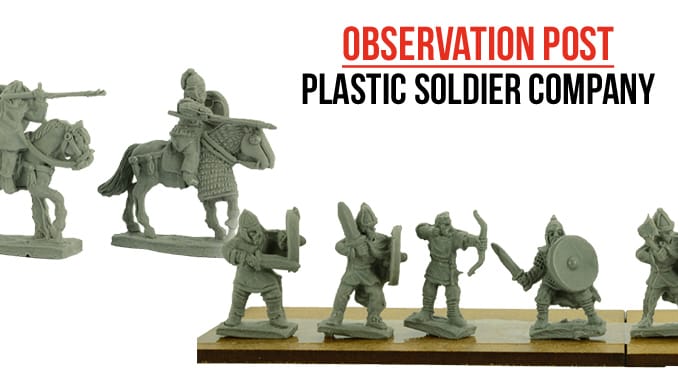 These new, plastic 15mm figures from the Plastic Soldier Company are just one box set from a whole variety of armies that are being made available for use with the Mortem Et Gloriam Pacto rules system or any other Ancients rules. There is a complete ‘army in a box’ approach, with this particular one being focussed upon a generic Gothic army.

For those not aware, Mortem et Gloriam (MeG) is an Ancients Era ruleset designed by Simon Hall which has a strong following in the UK, Greece, Belgium, France, USA and Australia, with regular competitions in each of these countries. At the last count, there are over 650 army lists to go with the rules. The ruleset had its first international World Championships, with players from as far afield as California and Australia joining those from Europe at Simon’s Skull Rollers Jamboree hosted by Battlefield Hobbies, in 2019. This set of figures is part of a line designed to provide all the units needed to play Mortem Et Gloriam Pacto, a ‘compact’ version of the rules that uses 20 – 30 bases and is a scaled down version of the more involved rules, allowing a 15mm battle to be fought out over the course of 1½ hours on a 3 foot by 2 foot table.

The review samples we have been sent are detached from the frame that they are usually a part of. The material used by PSC is their new ‘Ultracast’, a hard plastic material with a certain flexibility. The smaller parts, such as spears, swords, etc. do bend, but the plastic returns to its original position very rapidly. They remind one of the best aspects of the old Airfix figures, but appear much more sturdy and less likely to develop the ‘round the corner’ firing position of the latter!

In terms of sculpt and casting quality, these are equivalent to some of the better metal ranges on the market, but are a fraction of the weight and would take minimal clean up, although some mould lines are noticeable on a few of the figures. The actual plastic used allows for some great folds of cloth, saddlery, mail and other aspects, with a texture designed to take paint without any undercoat. The use of raised details also suggest that these figures would respond well to the ‘base paint and wash’ approach.

The contents of the pack mirror the numbers required for gaming with the Mortem Et Gloriam Pacto rules. There are 4 mounted generals, 6 armoured cavalry, 22 unarmoured cavalry, 52 warrior infantry and 12 archer infantry. The designations come from the rules themselves, but perhaps it is worth mentioning that the ‘warrior infantry’ consists of both armoured and unarmoured figures, some with hand weapon and shield, others with spears. This would perhaps help those using other rules in terms of creating units of similarly armed warriors. However,  once they are based up, that’s 96 figures in total, more than enough for a small army, and one that’s not going to weigh much for carrying purposes, easily fitting into a small box.

Our Opinion –  These are very nicely done miniatures, in a material that offers a resilience and overall quality that works well.  Plus, although intended for a particular variant of a particular ruleset, a box or two of these and some ‘frugal’ basing means that you’d have a fairly large army. In many ways, 15mm is perfect for the ‘large scale, small battlefield’ style of battle that cannot easily be fought with larger miniatures. The fact that these figures are as detailed as some of the better 15mm metals on the market make these a wise investment.