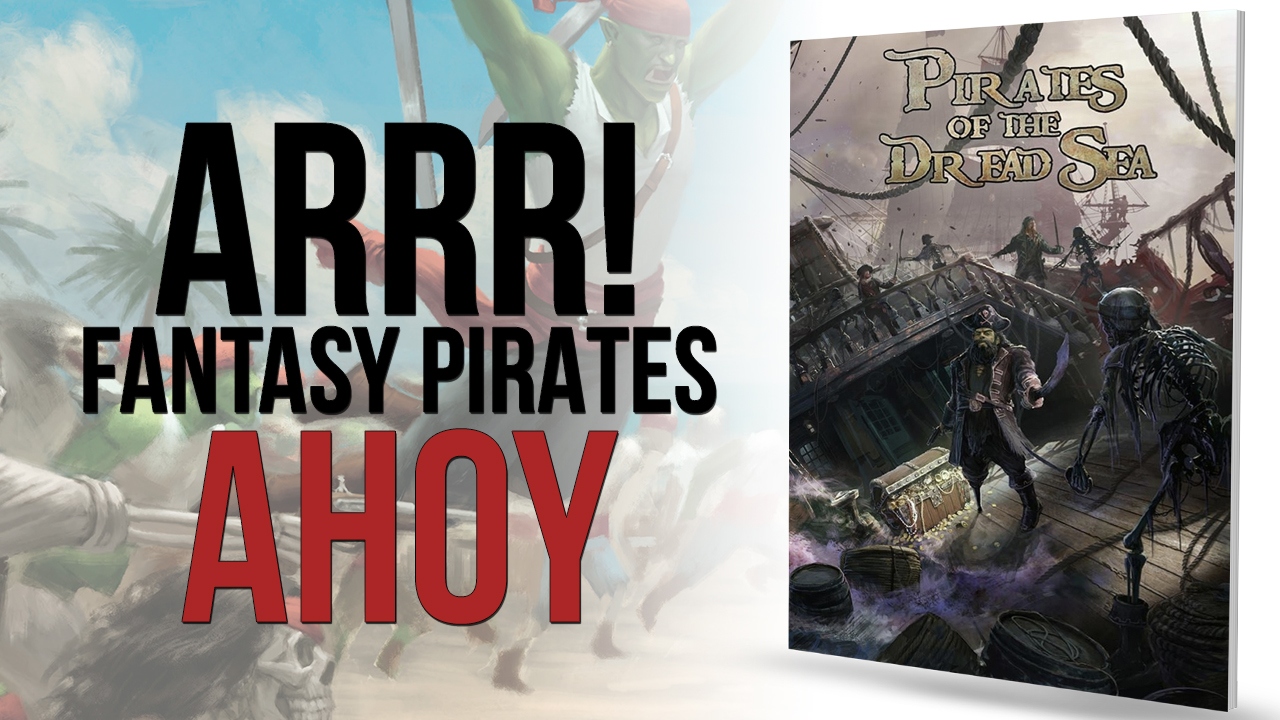 Pirates of the Dread Sea (PODS) is a new release from Dead Earth Games, who have funded it, and the miniature range that supports it, through Kickstarter.  First impressions are good, as this 96-page A4 hardback book is full colour throughout and is extremely well produced.

The text below is a transcript from the video, for those who would rather read than listen.

You will not be surprised to learn that this is a “Pirate game,” set in the mythical “Dread Sea”. Players form a crew of around six models who can be human or any one of a number of fantasy races, including Dwarves, Elves, Undead or even the part Aquatic Skrier. Options exist for you to mix and match your crews to suit your taste, although all human campaigns are perfectly permissible if fantasy games are not your thing.

Using a “Gold Pieces” points system, crews are purchased then upgraded with weapons and given particular roles, such as Captain, First Mate, Powder Monkey or Cook for example, each of which has different abilities. This information is recorded on the individual’s character card.

A nice touch is provided by the “Piratey Characteristics” section, where you can buy extra abilities for crew members, such as “Swashbuckling” or being “Brave” in exchange for suitable handicaps, such as having an eye patch, hook hand or peg leg. Parrots are given a role here as magical familiars which can benefit the player during the game, making them more than just a brightly coloured pet.

Game play is pretty straightforward. After a dice roll to see who goes first, the players take it in turns to activate one character from their crew. Once activated, the character can perform two actions, such as move, shoot, fight, search for treasure and so on. Once that characters actions are complete, the opposing player now gets to activate one of his characters and so on until all of the models have activated at which point you start a new turn. Success or failure to perform actions is usually decided by rolling 2d6, with the character having to roll over his or her stat to succeed. Humans, for example, need to roll higher than a 7 to open and successfully search a treasure chest whilst Undead, being rather dim, would need to roll higher than a 9.  Melee combat is decided by an opposed dice roll, with both attacker and defender rolling modified 2d6. If the attacker is successful, he rolls to wound. Being hit by a sword or bullet might not always kill, however, with characters able to suffer a number of light wounds before being incapacitated.

There are some really neat ideas included here that make shooting and combat unpredictable. For example, if you roll much higher than your basic score to hit on 2d6, the number you exceed your to hit roll by is subtracted from the targets toughness, hence making him easier to wound. This makes rolling an 11 or 12 to hit very different from just scraping by. Included in the treasure stashed somewhere on board might be some fabled “Pieces of Six” which players can spend “in game” to convert any dice roll to a 6, which may just save their bacon.

Players can interrupt the turn sequence at any time by playing one of the three “Event cards” they are dealt at the start of the game, with which they can hopefully disrupt their opponents best laid plans.  They include such things as “Sea Legs” which make a character fall over, to an “Octopus Attack” which pulls an unwary character into the water!

Six sample scenarios are provided, although PODS is best played as a campaign or series of linked scenarios, as characters can spend their hard earned gold to gain skills and traits and hence become more formidable as a Pirate crew.

Example crews are also provided so you can start playing straight away and online support is also available from Dead Earth games website, including downloads and videos of how to play the game.

“Pirates of the Dread Sea” is written in a lighthearted way and does not take itself too seriously. The game is easy to pick up and play but has enough nuances, such as the “event cards” and magical races, to keep it fun and unpredictable. Since crews contain a maximum of about six miniatures, this puts this game at the end of skirmish wargaming, but this also means you don’t have to collect or paint many miniatures to get started.

The book is illustrated throughout with pictures of painted miniatures but it also contains some very atmospheric full-page art that really sets the scene and makes this a great book just to flick through and enjoy. If you are looking for a fun, man to man level, Pirate skirmish game then look no further.