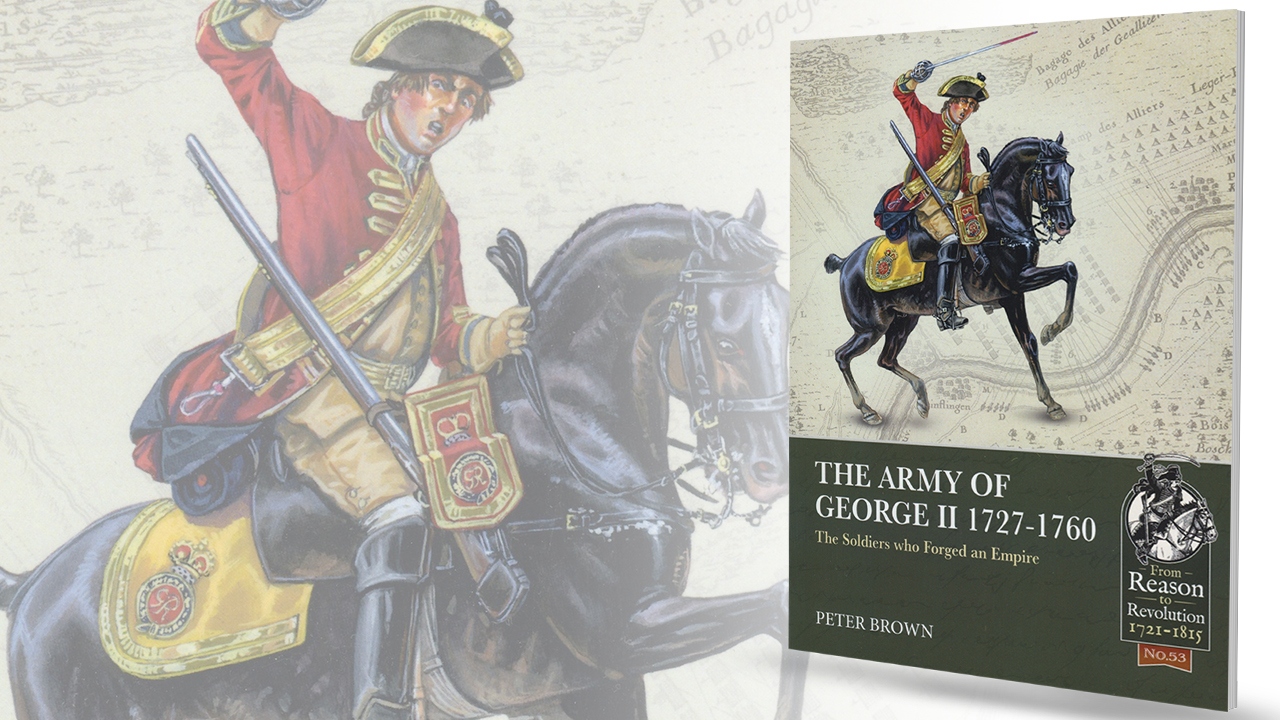 Peter Brown’s The Army of George II 1727 – 1760 is #53 in Helion’s excellent From Reason to Revolution series of military history books. At nearly 300 pages, including appendices and bibliography, this book provides comprehensive coverage of a less-studied and under-appreciated army that, in many ways, laid the foundations for Britain’s empire.

Brown sets the scene with a running dispute between King and Parliament over the size of the army and funding, neither of which were quite adequate for Britain’s needs. The Regiments were run almost independently with a wealthy Colonel employing an agent to look after the needs of his men.

You joined the army by volunteering and taking the King’s Shilling. Though men did so not to avoid poverty, as might be expected, but for the usual reasons of adventure and personal gain. The recruiting parties competed over them to fill their regiments, while at times of crisis some conscription took place. Whatever the case, very few men deserted.

The army had no barracks outside of troubled Ireland, so were billeted on the local population and moved around every couple of months. They were paid cash in hand, shared food to save money, did drill and cleaned their equipment, preparing for reviews. The army also helped suppress civil disobedience and catch smugglers. Some soldiers served on ships as marines. Marriage was frowned upon, but tolerated, and soldiers’ wives worked around the army camps. Brown takes a moment to explain that punishments for soldiers were not much different from civilians. These were tough times!

The author surveys the army’s organisation. He begins with the officers who were mostly middle-class and career orientated, though rank was still mostly purchased and a generous patron helped advancement. The infantry consisted of three regiments of Foot Guards and the Line Infantry, which were further broken down into Companies. George II took an interest in his army’s appearance so that uniforms became more standardised, though still with some differences such as the Scottish Highlanders. They carried Regimental and National Colours. Cavalry roles changed over George II’s reign, with Dragoons becoming more prominent, and Light Cavalry added as Regiments. The artillery came under the central control of the Board of Ordnance and was therefore more uniform. Mercenaries hired from northern Europe supplemented the army, with home-based militia and ad-hoc volunteer regiments raised in times of crisis. Brown finishes his survey with a look at medical practice and logistics.

The book describes the army on campaign. Soldiers received their marching orders, assembled on a suitably large campsite, then embarked for war. None of this looked particularly disciplined but they got the job done. As with everything else in his book, Brown describes all this in detail, along with intelligence gathering.

The point of a campaign was to defeat the enemy through manoeuvre when possible, but by battle if necessary. The author then discusses the battle experience. The army usually had notice of an impending battle and prepared accordingly. Brown considers command and control, then deployment, including the cavalry screen and fighting. Next came the infantry advancing into first artillery then opposing infantry fire. The author notes that the British infantry drilling helped their firing rate and following up with the bayonet. Then came the aftermath of battle, with scavengers stripping the dead. Becoming a prisoner or being wounded and arriving in a rudimentary field hospital were necessary risks, but there was also the prospect of booty.

The author follows with a tour around the Empire. He begins in North America where regular soldiers adapted to local conditions with changes to their uniforms and weapons, and light infantry came to the fore. Other soldiers went to India but in a very different context, requiring a different approach. Brown gives the rest of the Empire a brief overview before turning to the experience of men who left the army to return to an inhospitable civilian environment.

The author concludes that not much had improved in the army over the course of George II’s reign. Yet Britain over that period had secured an Empire. Brown attributes that to the fortitude and adaptability of the British soldier. He concludes his work with appendices on regiments and uniforms.

The Army of George II 1727 – 1760 is an engaging book from an author who clearly enjoys his subject. Peter Brown surveys the army with authority, concentrating on those aspects that military history students and wargamers alike want to read about. His selection of supporting sources is particularly good. The production value is also high, despite a few annoying typos, with excellent colour illustrations and photographs of reenactors. Anyone interested in 18th Century warfare will enjoy this book.